The G-20 statement contained seven principles to guide policy during the balance of the crisis period. However, the agreed to policy principles juxtaposed with US trade data suggest that the G20 may be promoting the current recovery at the expense of contributing to a future crisis. The likely existence of this trade-off can be seen by reading the G20 statement (The executive summary is reproduced below.) and examining the behavior of the US trade deficit. The underlying politics also imply that probability of international economic and financial cooperation extending past the current stimulus packages is low to non-existent.

First, the executive summary of the G20 statement:

The global economy has returned to positive growth following dramatic declines. The recovery is, however, uneven and not yet self-sustaining, notably in advanced economies. Financial conditions have continued to improve, but are still far from normal.

Exit strategies should pave the way for strong, sustained and balanced economic growth. The Principles below are intended to establish common ground for the design and implementation of policies during the exit from the extraordinary support measures taken during the crisis.

Principle 1. The timing of exits should depend on the state of the economy and the financial system, and should err on the side of further supporting demand and financial repair.

Principle 2. With some exceptions, fiscal consolidation should be a top policy priority. Monetary policy can adjust more flexibly when normalization is needed.

Principle 3. Fiscal exit strategies should be transparent, comprehensive, and communicated clearly now, with the goal of lowering public debt to prudent levels within a clearly-specified timeframe.

Principle 6. Economic conditions, the stability of financial markets, and market-based mechanisms should determine when and how financial policy support is removed.

Principle 7. Making exit policies consistent will improve outcomes for all countries. Coordination does not necessarily imply synchronization, but lack of policy coordination could create adverse spillovers.

The seven principles all address domestic policies, monetary, fiscal and financial repair. The emphasis is on restoring sustainable growth. However, despite the call for balanced economic growth in the second sentence, there is no call for any country to take any steps to reduce global economic imbalances. 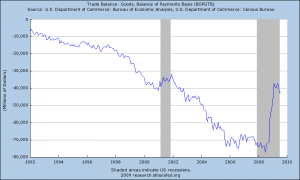 The juxtaposition of the G20’s seven principles, noting the absence of any effort to restore global balance, and the chart above should raise a number of questions.

Can we return to “balanced economic growth”, as per the executive summary, if the sole focus of policy is the restoration of economic growth? The behavior of the US trade deficit suggests stimulating economic growth in the US will lead to a re-widening of unsustainable international imbalances unless other steps are taken.

What does the total absence in the G20 statement of any reference to measures to reduce and prevent unsustainable global imbalances imply for the willingness and ability of policymakers to address the global imbalances?

Should not the exit strategy include steps to restore global balance if growth is to be sustainable?
Indentifying and implementing policies to prevent a return of wider trade deficits will be an economic, financial and political challenge. The effectiveness of Dollar adjustment to restore global balance is limited by the concentration of the US trade deficit and the willingness of some countries to peg the currencies to the Dollar. On the other hand, the Dollar must be part of the any adjustment process as the prices of US produced tradable goods must rise relative to the prices of US produced non tradables goods and services to incentivize resources to return the tradable goods sector. Additional adjustments will be required of the US, but adjustments by other countries will also be required to achieve an efficient and sustainable pattern of trade.

From a US geo-political perspective, there is another challenge. The US position is that other countries must make the adjustments (bear the costs) to reduce the imbalances. This turns the Washington consensus and years of precedent on their heads. In the past, when international imbalances generated problems, the costs and burden of policy and economic adjustments were borne by the deficit country(s) and not surplus countries. In this case however, the US position is exactly the opposite. The US position will not win it any friends.

Two statements this weekend, one by Geithner and the other by Chinese Premier Wen, reflect this problem. Geithner’s post-G20 statement indicates that US is still counting on cooperation from the rest of the world:

These are all global challenges. They are important to our national economic interest, but they cannot be addressed by the United States alone.

I hope that as the largest economy in the world and an issuing country of a major reserve currency the United States will effectively discharge its responsibilities, …Most importantly, we hope the U.S. will keep its deficit at an appropriate size so that there will be basic stability in the exchange rate and that is conducive to the stability and recovery of the world economy.

The ongoing financial crisis will only worsen, if economic growth is not restored. However, it would be a Pyrrhic victory if the recovery simply set the stage for another economic or financial crisis.