Why do so many people continue to turn their noses up at an investment with returns like those listed below? And not only that, why do small groups continue to aggressively attack the very notion that it is genuine, a real trend, a development with appeal across many nations and people, a sustained market trend that is telling us something?

Returns, I might add, that are supported by very strong fundamentals of supply and demand. Coming off a twenty year bear market in which supply was diminished, and burdened by years of central bank selling that seemed to be non-profitseeking and bureaucratically determined to crush any rallies, the market turned off the bottom in 2001 and has barely looked back since except for brief corrections.

“Since the start of the decade gold has been in a strong secular bull market in which it has had only one negative year (2001) while the S&P 500 has had four. Gold’s strong performance has produced a cumulative return of 311.54% for an annualized return of 15.18% per annum this decade. In stark contrast, the S&P 500 has been in a secular bear market in which its cumulative return has been a negative 24.52% for a negative 2.77% annualized return. While gold has had periods of volatility (risk), what the above numbers indicate is that gold has had a superior investment profile relative to the stock market..” Chris Puplava, Gold and Newton’s First Law of Motion

Central banks are now net buyers in the aggregate for the first time in many, many years. This is a significant change since they were a major source of marginal supply. The post Bretton Woods dollar regime created by Nixon in 1971 is shaking hard, trembling the foundations of a world currency system based on financial engineering, empire, and oil.

When the unthinking mob starts buying, and gold and silver are no longer considered eccentric but essential, and local shops and banks start buying and selling the metal, then it will be the time to sell. But probably not before.

This is a phenomenon, a generational occurrence. Personally, it is fascinating, and worth having retired early to see it unfolding day by day.

I have analyzed this market trend repeatedly over time, from many different dimensions, and have listened to every argument, pro and con. It holds water, it makes sense, adds up; it seems grounded in free market principles, historical trends, the invisible hand of the market. It is a keystone of Austrian economics.

And unless it is otherwise impeded, it will most likely continue for some time, until the financial engineering of bubble-nomics subsides, and returns on paper become ‘real’ again. When the world of fiat currency and finance becomes less arbitrary and more predictable, more stable and just. More rational and some might say, conventional.

The rally in precious metals sparks fear and envy in many; it makes them genuinely angry and emotional, even otherwise intelligent and rational people. And one must surely ask, “Why?”

I remember vividly a warm spring day in Red Square in 1996, watching a small group of the old guard, long time Communists, demonstrating against Yeltsin and the reforms of Gorbachev. They did not like the changes, and railed against them, dressed in their shabby clothes with their once mighty banners, now drooping.

Their savings in roubles were decimated, and the worst devaluation was yet to come with the debt crisis of 1998. The once mighty Soviet republic was in disarray. They clearly did not like it, violently opposed it, denied it, while yearning for the past. There was no one in the queue at Lenin’s tomb, and even though it was absolutely deserted in the middle of the day, the young soldier on guard yelled reflexively at us to “hurry, move along” in an almost surreal way. He did not know what else to do.

And no one cared, except for a few curious onlookers like our small group. No one noticed. They were being made extinct by change which they would not, could not, accept because it conflicted with their view of how the world had been and how it should continue to be. They held to their familiar, conventional wisdom, and became out of synch with the times, an oddity, almost atavistic.

There were vibrant business opportunities although the risks were high. Shortages and ‘criminal gangs ‘ were in the ascendancy, to a notorious degree, but the surface was peaceful overall. Life goes on, always. I had long conversations with many entrepreneurs, including those who were acting to solve the problems that were plaguing many Western corporations, who were in business to make things work, to find opportunity in the change, who were trying to make their way. One door closes, but another door opens. We made a good business of it, and some friends who are remembered fondly to this day.

The discussions we had about value were grounded in practicalities but were profoundly philosophical, as is so common among the long-suffering. Such is the character of the Russian people. I loved the land and the culture with a natural affinity that was almost surprising. But on the whole, people are the same everywhere, but with their own particular attractions and character which makes them uniquely interesting. The spirit permeates the world. 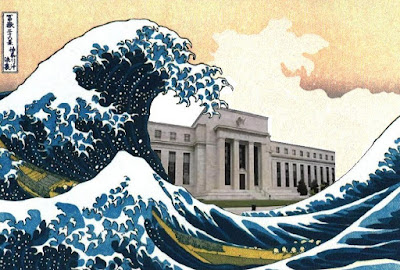 The tide of history rolls in, and does not conduct focus groups, or popularity polls, or honor the consensus of the crowd. The smart money tests it, and then moves early with it, or at least does not fight it. The only traces of the trend are what the few are doing and where their money is flowing. The tide moves slowly, inexorably, but is there for any and all to see if they would just look past their preconceptions, their ideologies, their desire for what once was, but can no longer be.

At this point in history, gold is a harbinger of change. People of the status quo fear change and change agents, always. And despite their best efforts to stop it, to discredit the messenger, obliterate its effects, to silence the message, the tide of history comes and washes over them, and the landscape is changed. And the familiar is a thing of the past.

We live in remarkable times. If you do not like to hear about change, if it upsets you, then do not read Le Cafe, and stick to the mainstream media. Documenting and analyzing and surviving change in the financial sphere is what this is all about. No matter where reason and the data may lead, no matter what icons may fall, après déluge.

Live it, and not the myth.