In Missouri, about 100 percent who were eligible [for food stamps] that year took advantage of the program, the highest rate in the nation, followed by residents of Maine and Michigan, at 91 percent and 89 percent, respectively …

Things have gotten much worse since 2007: 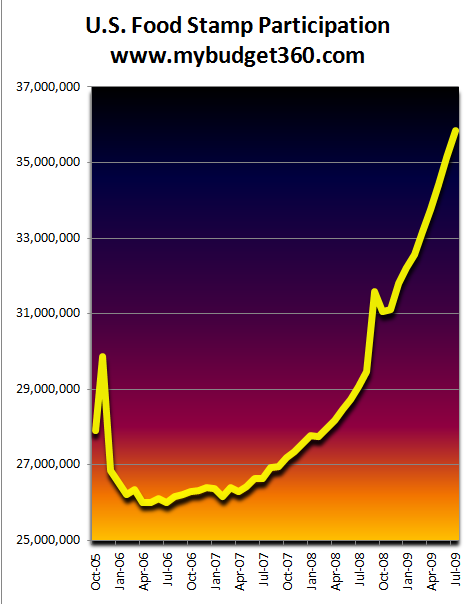 As the New York Times notes, “one in eight Americans and one in four children” receive food stamps.

Many economists and financial experts have said that we are in a depression. See this, this and this.

I hope they are wrong, or that – if we were in a depression – we’re out of it now.

But it is indisputable that the unemployment numbers are still grim. Specifically:

Given the above, Stacy Herbert’s question of today is compelling:

The food stamps story seems to be one that keeps popping up; I guess food stamps are the soup lines of this Great Depression?

Note: At least some economists say that food stamps give more bang for the buck in stimulating the economy than just about anything else. And see this. But economic, political and moral questions surrounding food stamps are beyond the scope of this essay.