Dear readers, as much as the fact set in the headline sounds bad, we need to parse things a bit to calibrate properly. IMHO, the fact that the Fed used an attorney that also served Goldman is symptomatic of how concentrated the high end of finance has become and how incestuous all the relationships are rather than evidence of a misdeed (mind you, I DO consider the failure to disclose to be not kosher, but more on that below).

First, to the underlying issue. From Little Sis:

….here is an incredible conflict of interest at the heart of the AIG-New York Fed dealings: the very same New York Fed lawyers who pushed AIG to withhold the names of counterparties also advised Goldman Sachs on large deals in 2008.

Goldman Sachs was one of AIG’s largest counterparties, and received a controversial 100% payout on its swap contracts with the firm.

The attorneys worked for the firm Davis, Polk, & Wardwell, which represents the New York Fed. Davis Polk attorney Peter Bazos pushed AIG to withhold agreements that contained the names of key counterparties (including Goldman Sachs). From the Wall Street Journal:

In a Nov. 25 email, Peter Bazos, an attorney at law firm Davis Polk & Wardwell, which represents the New York Fed, wrote that certain agreements “do not need to be filed.” One agreement contained the names of banks that received payouts from AIG. A Davis Polk spokesman declined to comment.

Bazos had advised on a Goldman Sachs deal the previous month, in October 2008 – a $12 billion stock offering from GE.

Davis Polk lawyer Ethan T James, who had advised on another Goldman deal that closed in May 2008, asked AIG to delete information on routine disclosure statements about the $10 billion in swaps. From the New York Times:

The Fed’s lawyer, Ethan T. James, of Davis Polk & Wardwell, deleted all references to the $10 billion in swaps that could not be torn up. He wrote in the margin: “There should be no discussion or suggestion that A.I.G. and the N.Y. Fed are working to structure anything else at this point.”

Yves here. Yes, it is true that Sullivan & Cromwell is Goldman’s preferred firm (the two are almost joined at the hip), and Davis Polk is more strongly associated with the Morgan houses, but as much as this looks bad, correlation does not imply causation.

Let’s consider some facts. There is substantial bias in New York, and I stress bias, towards using the big name fancy firms. The fact is that the securities regs are only 1/4 to 1/5 the length of FDA regs, and are very well settled. In the stone ages, when I was at Sumitomo, I used Covington & Burling, a Washington, DC firm, rather than one in New York because I knew I’d get more attention from experienced partners than at any of the big name NY players. Third world investment bankers don’t command the legal fees to get access to the top team (yes, the vast majority of legal work at big firms is done by two to seven year associates, but on deals, you DO want seasoned partners involved in the negotiations).

So the Fed is probably very much a believer in the law firm status game, gotta have big players, rather than a horses-for-courses stand. And there are good firms (but not high status by New York standards) that do not represent the big banks. This may no longer be true, but as of a couple of years ago, Venable, a DC firm, stayed away from banking clients (it preferred to represent people suing them) and still had a good SEC practice (any big corp will need some securities law advice from time to time, and you also have to be pretty good to man a decent litigation practice in a regulated area).

So if the conflict issue was perceived to be a problem, there were solutions. But the course of least resistance was no doubt perceived to be to disclose the conflict (as if it needs to be disclosed, the Fed no doubt is well aware of the fact that the big NY law firms have the Street as their main meal tickets) and get a waiver.

The second issue is that good lawyers aren’t passive about the law. They try to find a way through the thickets of the law to do what their client wants done. So the Fed doesn’t want the payout disclosed (or the Davis Polk lawyers point out this could be embarrassing and the Fed agrees?) Wellie, we seem to have an easy rationale, which the NY Times parroted:

Others disagreed, saying that bank and insurance regulators normally keep their discussions with struggling financial institutions private, to keep from inciting runs. There has always been tension, one securities lawyer said, between banking regulators, who want to resolve problems behind closed doors, and the federal securities laws, which compel disclosure.

Yves here. Ahem. You can see how specious this argument is. AIG was ALREADY backstopped, as was every bloody bank feeding at the 100% payout trough (even though some of the Eurobanks like Deutsche Bank have not gotten equity injections, they have benefitted from super low interest rates and the other fancy bank welfare programs devised by the Fed and other central banks). And the usual context is that the financial firm is in serious negotiations with its regulator or has been moved to a risk designation that says it is deteriorating. This was not the case with any of these firms; this was not a matter of current and prospective credit quality, but of how money flowed from the Fed through AIG to the banks. This failure to disclose most assuredly had NOTHING to do with the precedents invoked.

So yes it stinks, but the Davis Polk team acted in a predictable manner. It’s pretty likely just about any big New York securities firm would have taken the same posture, recent dealings with Goldman or not. So this situation illustrates a general problem, that of the regulators relying on advisors who are strongly aligned with the industry, rather than broader social interests. But the Fed has consistently acted as a backer and enabler of the perps; why should this particular incident be any surprise?

Update: Alert reader and occasional guest blogger Richard Smith points out that Sullivan & Cromwell did have a hand in the AIG press release….as counsel to AIG (see p. 9 at this URL for the other e-mails): 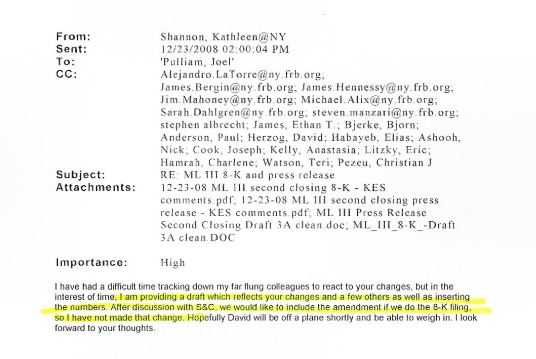