By Tom Adams, an attorney and former monoline executive, and Yves Smith

For those of you who followed the House Oversight Committee hearings on the Fed’s conduct in the AIG bailout, one focus of discussion was the Fed’s efforts to keep the details of the CDOs that the Fed effectively bought via an entity it created, Maiden Lane III, secret.

As we demonstrated, these details were hardly secret. The identity of most of the transactions were already public, and from that, considerably more information could be added with not much difficulty from other public sources. We published this detail last week (apologies for the itty bitty print, it’s easier to enlarge from here), with a discussion of findings and gaps. 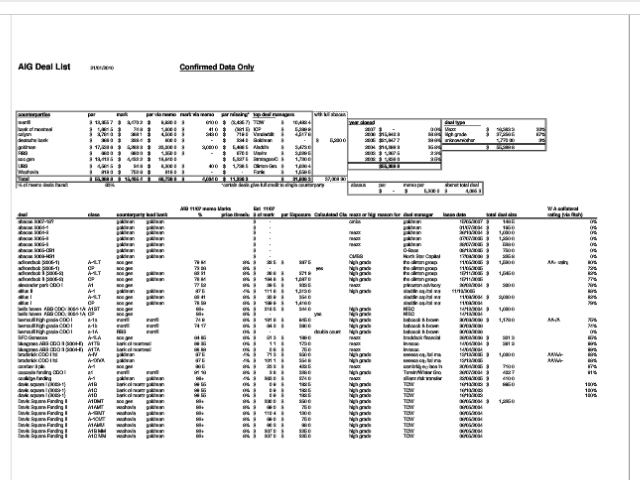 Yesterday, Darrell Issa, who was the moving force behind the subpoena by the House Oversight Committee which forced the release of 250,000 pages of documents related to the AIG bailout from the Fed, released the notorious Schedule A, the transaction-level detail the Fed was so keen to keep secret, to Huffington Post, which published it.

From that, we have been able to update our work and are publishing the full output of our latest model run. We had already added CUSIPs (which the Fed stressed in testimony yesterday that was something it needed to keep confidential) on 85% of the deals prior to the Issa release,. Getting Schedule A allowed for refinements and corrections.

We indicated in our earlier post that while we did not have all the Maiden Lane III transactions, we had most of them, and this was confirmed by the publication of Schedule A. Of the $62.1 billion in par value, our earlier spreadsheet had all but $11 billion, or 82%, which is consistent with our estimates of our success re capture.

Here is a link to the updated version (which contains more information than Schedule A). Please note that there may be some minor errors; we will go over it again today to double check and correct. In some cases, the print was hard to read, and we hope to resolve anomalies today. For $11 billion of deals added, we also need to add collateral type, year and deal manager; that should also be incorporate today. Some sample output below: 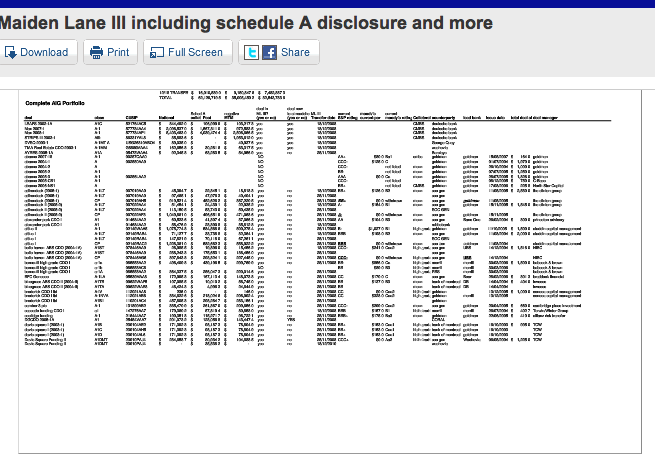 We will be writing up our observations regarding counterparty relationships later today, but one point leaps out of this cut, namely, that for a fair number of deals, the posted collateral is very close to the notional amount of the bonds. In layperson-speak, that means some deals were basically dead already – and they were distributed across vintages and collateral type (excluding the commercial real estate CDOs, which are a small portion of the total). This implies that the other deals were going to catch up at some point. Put another way – if a 2005 high grade deal from one issuer had 80% collateral posting (meaning the counterparty and AIG agreed it was worth only 20% of its original value), odds are high that the other 2005 high grade deals and the 2006 high grade deals are going to get there soon enough (there was enough similarity in structures and underlying assets that the dispersion among eventual outcomes, in most cases, would not be that great).

The fact that some transactions were acknowledged both by AIG and the dealers to be zeros as of the bailout is yet another reason to doubt that these deals would have future upside. That is contrary to both the Fed’s logic in buying the CDOs (see our related post) and its current claim that the deals have traded up despite a massive decay in credit quality. Per a BlackRock memo prepared just prior to the November 2009 decision to buy the CDOs, only 19% were rated junk. Now, according to Moody’s, the more conservative of the two ratings agencies, 93% are rated junk.

Note that the Fed is already engaging in shifting rationales as to why this information needed to be kept in confidence. Its first argument was that the revelation of this information would damage AIG. That was obviously bunk; AIG has limited upside in the vehicle that owns the CDOs (and that charitably assumes there will be any upside). But that was the only line of argument that would fly with the SEC.

The new claim, from the New York Fed’s general counsel Thomas Baxter, is that BlackRock said secrecy was necessary to keep traders from taking advantage of the Fed if and when it decided to sell down the road. But even setting aside how much information was already known and could be developed, the argument is simply implausible. These are unique, illiquid deals; there is no obvious way to manipulate the market in advance of a Fed sale (yes, in theory one could game the ABX, but a sale of this sort is a protracted process, and any party trying to push the ABX around is not assured at all of benefitting by being the winning bid).

Consider: let’s say a bank wound up owning a bunch of apartments because a real estate developer went bust. You know they are scattered across three buildings (some apartments were sold before the developer failed), you know what the developer’s aggregate asking price was, you know the mix of one, two, and three bedrooms; you know the floor plans for one, two, and three bedrooms in each building. You don’t know how many of each type, and where they are situated (ie, which floor, which exposure, which will affect light, views, noise levels).

The bank is going to sell them individually. Thus, the “identity” of each apartment has to be made public for a sale to occur.

Maiden Lane III and the Fed are in a position very much like the bank in question. Even ex the transaction level detail, prospective buyers know the ratings across the portfolio. The names of the biggest deals were disclosed in Maiden Lane III financials. AIG in previous presentations to shareholders provided a good deal of information on vintages and collateral in the residential real estate CDO portion of the Maiden Lane III portfolio. And when Maiden Lane III goes to sell any particular CDO, any market professional has access to the databases that will allow it to look at the underlying collateral (analogous to an apartment viewing).

So how can keeping the identity of the “apartments” secret be of any benefit as far as producing more value in the event of sale? All of the evidence points to the fact that there are other reasons for keeping this under wraps. We’ll continue this line of thought in a post later today once we have tidied up the data a bit more.

Richard Smith contributed to this article