Monetary policy is center stage as the Fed pursues highly accommodative policies in order to generate a recovery and rebuild the financial system. However, some market participants are questioning the Fed’s ability and willingness to exit the current highly accommodative stance in a timely manner. Unfortunately, the market skeptics have history on their side. 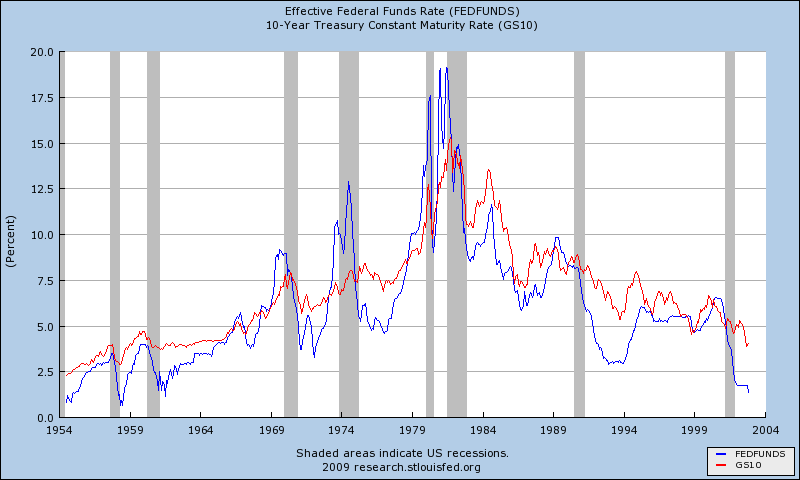 Three important points about the Fed’s ability and willingness to adjust policy in a timely fashion can be gleaned from the chart (Courtesy of the St. Louis Fed) of the Fed Funds rate and the 10 year (constant maturity) Treasury yield with recessions indicated by the vertical gray bars.

Prior to the recession that started in 1980, the Fed was still raising the Fed funds target at or close to the cycle peaks (left side of the gray bars). Given the lags (“long and variable”) inherent in monetary policy, it appears that the Fed tightened too much and for too long.

Prior to the trough of 1980, the Fed was still cutting rates at or past the cycle troughs (right side of vertical grey bars). Given the lags (“long and variable”) inherent in monetary policy, it appears that the Fed eased too much and for too long.

For the period prior to 1980, the amplitude of the interest rate cycles was getting progressively larger.

Given that the Fed targeted the Fed funds rate during the period (till October 1979), it is clear that the Fed policy, centered on targeting the Fed funds rate, contributed to progressively larger swings- anti-dampened cycles- in the Fed funds rate, 10 year yields and presumably contributed to progressively larger cyclical swings in real economic activity and inflation. (This type of phenomenon -over correction due to lagged responses- is referred to as “instrument instability”). The Fed was aware of this in the early 1990s and set about trying to prevent a recurrence.

In Chapter 1 of Blinder’s 1997 “Central Banking In Theory and Practice”, he argues that in the early 1990s, the Fed decided that it had to move preemptively to dampen cycles. Blinder cites the preemptive tightening cycle that began in February 1994 and the subsequent realization of a “soft landing” as supporting the view that preemptive policy is required to dampen cycles and produce soft landings.
While Blinder did not mention it, the first step to end the pattern of “too much too long” occurred earlier.

In 1992, the Fed stopped easing before the Fed funds rate became negative in real terms. The Fed funds rate had been negative at earlier cycle lows. The Fed stopped sooner and eased less than history had led many in the market to expect. The tightening in February 1994 was earlier than virtually anyone expected. The 300 basis points that the Fed tightened starting in February was also less than the average in earlier post-war cycles.

The Fed had adjusted. It moved preemptively and it moved by less than it did on average in earlier years. The changes are consistent with an effort to end the pro-cyclical aspect of monetary policy.
In “Central Banking In Theory and Practice”, Blinder also made a number of points about the challenges in designing and implementing monetary policy as well as a very brief summary of how he chose to address them when he was on the FOMC. He cited “lags” and “uncertainty” as two of the challenges in designing and implementing monetary policy.

Blinder pointed out that the lags require preemptive policy. Furthermore, he noted moving preemptively requires some faith in the forecast and the willingness to act when the future course of the economy or chosen target variables remains uncertain. Blinder characterized the alternative – responding to problems after they manifest themselves – rather derisively as a “putting out fires” strategy.

What can be said about the current (post-1996) Fed? Again, the Fed appears locked in to a fire-fighting mode. It has not adjusted policy preemptively. It eased dramatically post the Tech bust in 2000. At the trough, Fed funds rate was negative once again. The Fed kept the Fed funds rate “too low for too long” while credit growth contributed to asset price bubbles, including the housing bubble, excessive leverage in the financial sector ultimately and the financial crisis of 2007.

However, it is difficult to argue that the Fed tightened too much for too long prior to the downturn that started in December 2007. The peak rate was in the neighborhood of the level that most version of the Taylor Rule associated with a “neutral” policy stance. While the Fed didn’t start to ease until 3 months before the cycle peak, it had ceased tightening 18 months before the peak.

Are rates too low now? Unfortunately, there isn’t a simple, straightforward answer to this simple question. Two possible paths of development must be explored in answering the question.
It is possible that short-term rates are not so low as to generate a normal recovery and maintain a pattern of anti-dampened cycles in interest rates, economic growth, etc. If that is the case, then the current Fed has solved the problem of instrument instability.

Unfortunately, it will have done so at the cost of a severe recession coupled with a crippling of monetary policy. It would also imply that at best that US will experience a Japan-like at-or-below trend recovery. In this case, while interest rates would not be “too low” in the sense that they will drive a pattern of progressively larger cycles, it is possible that they could lead to further distortions the capital markets and the re-distribution of income from savers to financial institutions, especially the TBTF institutions, which can safely lever up.

Given the current willingness to provide counter-cyclical fiscal stimulus and likely growth in the structural fiscal deficits, it seems that it would incumbent on the Fed to remove the monetary stimulus not only faster than it has in the past, but faster than it should have in the past.

However, the Fed is now committed to keeping rates low for an extended period of time. The Fed has signaled the market that it will not commence tightening until the economy has achieved a self-reinforcing recovery. The statement is aimed at reassuring the household and political sectors and may be supportive of asset prices. However, assuming a recovery and given the long and variable lags, it will have committed to remaining easy for too long-especially given the likely course of fiscal policy. It has also implicitly stated that it does not have sufficient faith in its own forecast to use it for policy purposes.

Consequently bouts of optimism about the recovery and the bias inherent in the Fed committing to keep short-term rates low are contributing to concerns that have been reflected in the fixed income, currency and commodities markets.

In response, the Fed is attempting to reassure the markets that it has the tools to drain the reserves that it has recently pumped in to the system. However, the markets’ concern has not been “does the Fed have the tools to drain the reserves”, but rather does the increasingly politicized Fed have the confidence, the will, the confidence in its forecast and the fortitude to take the politically unpopular step and begin to drain in a timely fashion. Fed officials assert that they will, but the open-ended commitment to maintain a highly accommodative stance for an extended period of time, i.e. until after the recovery is assured, strongly suggests that the Fed will again remain too loose for too long.

The current Fed has behaved much as the pre-Volcker Fed behaved and it has indicated that it intends to continue to do so. It is small wonder that many in the markets do not have confidence in this Fed?

Yves here. This is a very good summary and assessment, but it has one important omission. Alford praises the Fed’s “early and less” tightening in 1994. He also notes that the tightening was unexpected That’s an understatement. This was the first time credit derivatives were in use on a widespread basis (the bets were often embedded in bonds, so that folks like pension fund managers and insurance portfolio managers who weren’t allowed to use derivatives were nevertheless playing). And just about everyone had bet, often on a levered basis, that the Fed would continue to cut. The result was $1.5 trillion in losses, a bigger wipeout than the 1987 crash (but not a one-day event). There were also lots of hearing into derivatives, with the predictable lack of action.

That debacle led to the restoration of the old policy, plus asymmetrical responses: the Fed telegraphing well in advance any intention of raising rates, and then doing so cautiously, and being quick to ease.