The question of fiscal sustainability looms large at the moment – not just in the peripheral nations of the eurozone, but also in the UK, the US, and Japan. More restrictive fiscal paths are being proposed in order to avoid rapidly rising government debt to GDP ratios, and the financing challenges that may entail, including the possibility of default for nations without sovereign currencies.

However, most of the analysis and negotiation regarding the appropriate fiscal trajectory from here is occurring in something of a vacuum. The financial balance approach reveals that this way of proceeding may introduce new instabilities. Intended changes to the financial balance of one sector can only be accomplished if the remaining sectors also adjust. Pursuing fiscal sustainability along currently proposed lines is likely to increase the odds of destabilizing the private sectors in the eurozone and elsewhere – unless an offsetting increase in current account balances can be accomplished in tandem.

For individual sectors of the economy, these equalities need not hold. The financial balance of any one sector can be in surplus, in balance, or in deficit. The only requirement is, regardless of how many sectors we choose to divide the whole economy into, the sum of the sectoral financial balances must equal zero.

For example, if we divide the economy into three sectors – the domestic private (households and firms), government, and foreign sectors, the following identity must hold true:

Since foreigners earn a surplus by selling more exports to their trading partners than they buy in imports, the last term can be replaced by the inverse of the trade or current account balance. This reveals the cunning core of the Asian neo-mercantilist strategy. If a current account surplus can be sustained, then both the private sector and the government can maintain a financial surplus as well. Domestic debt burdens, be they public or private, need not build up over time on household, business, or government balance sheets.

Again, keep in mind this is an accounting identity, not a theory. If it is wrong, then five centuries of double entry book keeping must also be wrong. To make these relationships between sectors even clearer, we can visually represent this accounting identity in the following financial balances map as displayed below. 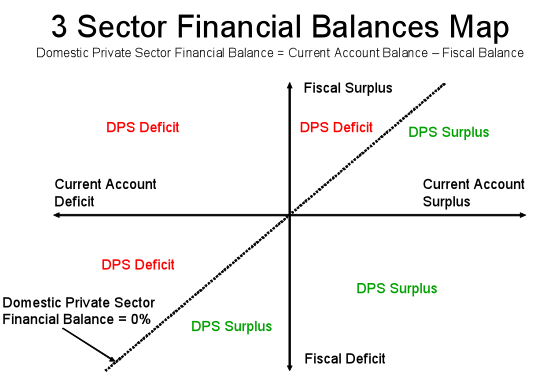 Accordingly, the further we move up and to the left of the origin (toward the northwest corner of the map), the larger the deficit spending of households and firms as a share of GDP, and the faster the domestic private sector is either increasing its debt to income ratio, or reducing its net worth to income ratio (absent an asset bubble). Moving to the southeast corner from the origin takes us into larger domestic private surpluses.

The financial balance map forces us to recognize that changes in one sector’s financial balance cannot be viewed in isolation, as is the current fashion. If a nation wishes to run a persistent fiscal surplus and thereby pay down government debt, it needs to run an even larger trade surplus, or else the domestic private sector will be left stuck in a persistent deficit spending mode.

When sustained over time, this negative cash flow position for the domestic private sector will eventually increase the financial fragility of the economy, if not insure the proliferation of household and business bankruptcies. Mimicking the military planner logic of “we must bomb the village in order to save the village”, the blind pursuit of fiscal sustainability may simply induce more financial instability in the private sector.

Leading the PIIGS to an (as yet) Unrecognized Slaughter

The rules of the eurozone are designed to reduce the room for policy maneuver of any one member country, and thereby force private markets to act as the primary adjustment mechanism. Each country is subject to a single monetary policy set by the European Central Bank (ECB). One policy rate must fit the needs of all the member nations in the Eurozone. Each country has relinquished its own currency in favor of the euro. One exchange rate must fit the needs of all member nations in the Eurozone. The fiscal balance of member countries is also, under the provisions of the Stability and Growth Path, supposed to be limited to a deficit of 3% of GDP. The principle here is one of stabilizing or reducing government debt to GDP ratios. Assuming economies in the Eurozone have the potential to grow at 3% of GDP in nominal terms, only fiscal deficits greater than 3% of GDP will increase the public debt ratio.

In other words, to join the European Monetary Union, nations have substantially diluted their policy autonomy. Markets mechanisms must achieve the necessary adjustments – policy measures cannot. Policy responses are constrained by design, and experience suggests relative price adjustments in the marketplace have a difficult time at best of automatically inducing private investment levels consistent with desired private saving at a level of full employment income.

Now let’s layer on top of this structure three complicating developments of late. First, current account balances in a number of the peripheral nations have fallen, in part due to the prior strength in the euro. Second, fiscal shenanigans along with a very sharp global recession have led to very large fiscal deficits in a number of peripheral nations. Third, following the Dubai World debt restructuring, global investors have become increasingly alarmed about the sustainability of fiscal trajectories, and there is mounting pressure for governments to commit to tangible plans to reduce fiscal deficits over the next three years, with Ireland and Greece facing the first wave of demands for fiscal retrenchment.

We can apply the financial balances approach to make the current predicament plain. If, for example, Spain is expected to reduce it’s fiscal deficit from roughly 10% of GDP to 3% of GDP in three years time, then the foreign and private domestic sectors must be together willing and able to reduce their financial balances by 7% of GDP. Spain is estimated to be running a 4.5% of GDP current account deficit this year. If Spain cannot improve its current account balance (because remember, it relinquished its control over its nominal exchange rate the day it joined EMU), the arithmetic of sector financial balances is clear. Spain’s households and businesses will need to spend 7% of GDP more than they earn over the duration of the next three years, thereby adding more private debt to their balance sheets.

Spain already is running one of the higher private debt to GDP ratios in the region. In addition, Spain had one of the more dramatic housing busts in the region, which Spanish banks are still trying to dig themselves out from (mostly, it is alleged, by issuing new loans to keep the prior bad loans serviced, in what appears to be a Ponzi scheme fashion). It is highly unlikely Spanish businesses and households will voluntarily raise their indebtedness in an environment of 20% plus unemployment rates, combined with the prospect of rising tax rates and reduced government expenditures as fiscal retrenchment is pursued.

Alternatively, if we assume Spain’s private sector will attempt to preserve its estimated 5.5% of GDP financial balance, or perhaps even attempt to run a larger net saving or surplus position so it can reduce its private debt faster, Spain’s trade balance will need to improve by more than 7% of GDP over the next three years. Barring a major surge in tradable goods demand in the rest of the world, or a rogue wave of rapid product innovation from Spanish entrepreneurs, there is only one way for Spain to accomplish such a significant reversal in its current account balance.

Prices and wages in Spain’s tradable goods sector will need to fall precipitously, and labor productivity will have to surge dramatically, in order to create a large enough real depreciation for Spain that its tradable products gain market share (at, we should mention, the expense of the rest of the Eurozone members). Arguably, the slack resulting from the fiscal retrenchment is just what the doctor might order to raise the odds of accomplishing such a large wage and price deflation in Spain. But how, we must wonder, will Spain’s private debt continue to be serviced during the transition as Spanish household wages and business revenues are falling under higher taxes or lower government spending?