By Glenn Stehle, an engineer who began working in the oil industry in 1974. After a two-year stint with Cities Service Oil Company, he worked for two years for Henry Engineering, a petroleum engineering consulting firm. Upon leaving Henry Engineering he worked as an independent engineering consultant in all facets of the oil and gas business. He has extensive experience in drilling operations. He retired in 2000 and now lives in Mexico.

Yesterday and today the Senate and House of Representatives conducted hearings on the Gulf oil well blowout.

The video of the Senate hearing can be found here.

I couldn’t find a video of the congressional hearing, but if someone knows where it can be viewed I’d appreciate it. For persons like myself who are interested in the nuts and bolts of the downhole problems, Waxman, DeGette, Scalise and Braley gave impressive performances, which I’d like to see again.
The congresspersons did a far, far superior job than the senators. Their witnesses are highly uncooperative, so it is clear that informants are feeding the congresspersons insider information. Here’s a Wall Street Journal report that sums up my sentiments perfectly, so I’ll let that suffice for editorial comment and move directly to some observations and explanations:

Here’s what came out in the congressional hearing:

1) This was a problematic well that had experienced chronic pressure control problems (Scalise questioning)
2) Following cementing of the production liner (in oilfield jargon, a liner = casing that doesn’t extend to the surface), no log was ran to confirm the integrity of the cement job (DeGette questioning)
3) Before displacing the drilling mud from the riser, there were two tests that were performed. One is a positive test that tests the integrity of the liner (casing). The other is a negative test that tests the integrity of the casing hanger-seal assembly. The second test failed. (Waxman questioning)
4) When the negative test failed, the written well prognosis required that rig personnel not proceed until contacting BP’s office in Houston (Waxman questioning)
5) The decision was made to proceed with well abandonment despite the failed negative test, and the crew proceeded to displace the mud in the riser with seawater.
6) There was a radio transmitter on the rig that sent various real-time parameters back to Houston which were recorded on a chart. Two minutes before the transmitter went dead, the standpipe pressure increased suddenly from 500 psi to 3500 psi. (Braley questioning)

I spoke of the significance of 1) and 2) in my former post, so won’t discuss them further here. 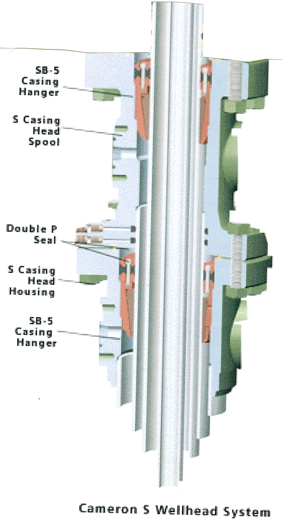 The blowout preventer stack is bolted on top of the wellhead, and if you scroll down to the bottom of this pdf you can see what one of those looks like.

As the illustration shows, on top of the blowout preventer is attached the riser, which runs up to the drill ship. On top of the riser is another annular pressure control device (16). Above this are a number of connectors that telescope and pivot to compensate for the movement of the ship and topping all this off is a diverter. The diverter is a low-pressure device. The one illustrated (10) has a working pressure of 500 psi.

In the BP well, 20 hours before the blowout they had run casing to a total depth of 18,360 feet below sea level and cemented with 51 barrels of cement slurry. In the case of the BP well this was the ninth casing string or liner, and a well schematic can be found here.

After waiting a short time for the cement to set up, they hung the casing off in the wellhead with a hanger-seal assembly. I say a short time because it was always my policy to wait at least 24 hours after cementing to give the cement time to cure. Green cement is not that strong.

Then they began displacing the drilling mud out of the riser. They would have done this by pumping seawater down the drill pipe and out the drillpipe-riser annulus. As they were pumping, the standpipe (drillpipe) pressure suddenly increased from 500 psi to 3500 psi, and then transmission from the rig went dead. We know how that movie ended.