Would you believe the chairman of a financial firm who told you that he was going to be able to pay off his loans to you when:

1. The company was showing a not-negative net worth ONLY because it had marked down its loans on its accounting statements by 7.5%, even when the loan agreement still calls for payment in full

2. Nearly a third of its assets are marked to model (for the technically oriented, valued as Level 3 assets) and therefore may be worth a lot less than the amount the company says they are worth

3. All the other assets he has should be benefitting from the Fed’s super low interest rates, meaning their market prices will fall if and when rates rise (which should happen when if the economy ever normalizes)

4. Other creditors will be paid before you are

5. There is every reason to expect more losses

Welcome to the wonder through the looking glass land of Maiden Lane, the bailout vehicle that holds crappy Bear Stearns assets. According to the Fed, the taxpayer will not lose a dime on it:

A number of facts mitigate the risk of losses being incurred on the FRBNY loan. First, there is a substantial pool of professionally-managed collateral at Maiden Lane that, as of March 14, 2008, was valued at $30 billion. In addition, JPMC’s subordinated loan to Maiden Lane will absorb the first $1.1 billion of any loss that ultimately occurs. Moreover, and perhaps most importantly, the collateral will be sold over time in an orderly manner that is not affected by the unnaturally strong downward market pressures that have been associated with the recent liquidity crisis. Finally, the FRBNY is entitled to any residual cash flow generated by the collateral after the FRBNY and JPMC loans are repaid. Given these protections, the Board at this time does not believe that the extension of credit to facilitate the acquisition of Bear Stearns will result in any net cost to the taxpayers resulting from the failure to repay the principal and interest of the FRBNY loan.

Yves here. Let’s parse the bullshit spin in this discussion, and then contrast it with the damning evidence in the Fed’s own documents:

“professionally-managed collateral”. Spurious. There is little a money manager can do beyond the margins to mitigate the losses (a money manager can’t prevent a Red Roof from filing for bankruptcy, cause revenue to rise at commercial buildings, or make residential mortgage borrowers pay on time).

“as of March 14, 2008, was valued at $30 billion”. This was criticized by experts at the time. The Fed took on Bear assets at their values as of the Friday before the firm failed, not the date of the collapse (March 17) when the assets were worth less. Another hidden subsidy to JP Morgan.

“collateral will be sold over time in an orderly manner that is not affected by the unnaturally strong downward market pressures that have been associated with the recent liquidity crisis”. Rough translation: we think real estate values will go up even more now that we have restored confidence by buying over a trillion dollars of mortgage securities. The Fed appears to believe its own PR. As we pointed out in an earlier post, people in the markets are of a very different view. One professional told us that the central bank-provided liquidity had goosed the values of subordinated commercial mortgage paper from its crisis levels of 30 cents on the dollar to its present value of 90 cents on the dollar. His belief of what it is worth based on its fundamentals? 5 cents on the dollar.

“the FRBNY is entitled to any residual cash flow generated by the collateral after the FRBNY and JPMC loans are repaid”. The Fed wants you to believe they might even show a profit! Do they want to buy a bridge too?

But let’s turn to its really big whopper, that the Maiden Lane loans will be repaid in full. Let’s first look at the creative accounting involved in pretending that the loans aren’t in trouble now (p. 14 of the December 31, 2009 financials, click to enlarge): 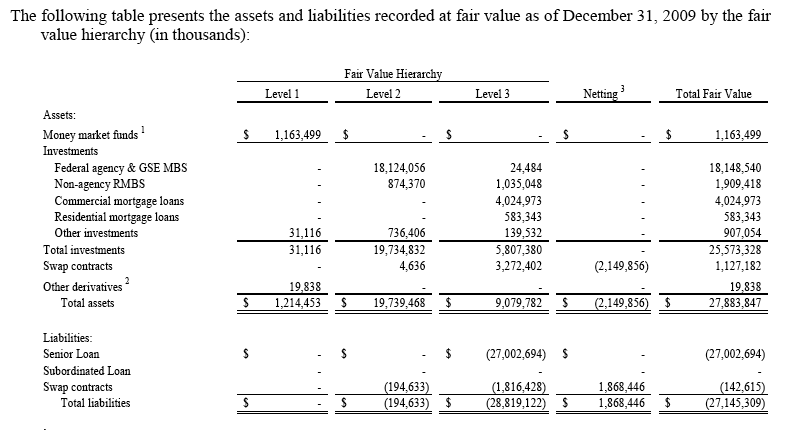 To make things easy, just look at the column “Level 3”. That means the values are based on “unobservable inputs” which is accountant speak for made up with some rationale and figures to make it seem plausible. It is also known as “mark to model” or less charitably, “mark to make believe”. We see that nearly 1/3 of the assets and virtually all the liabilities (the Fed’s loan) are valued this way.

Gee, it seems rather odd that the Fed is valuing its own loan on a mark to model basis, but that does produce the happy result that Maiden Lane doesn’t show negative net worth. The December 31, 2009 balance sheet shows the Fed’s loan on a “fair market value” basis at $27.0 billion. The very same financial statements (p. 11) say that it has a principal and accrued interest balance of $29.233 billion. Oh, but the total assets are only $28.140 billion, and there are other liabilities too (for instance, $1.122 billion of swaps contracts and swaps collateral). So the financial statements show pretty clearly that the Fed’s loan is under water NOW, yet the Fed is telling us it nevertheless expects to come out whole.

This sounds an awful lot like what we heard from financial firms under duress in 2007 and 2008, and there’s even more reason to be skeptical now. The entire financial system, dodgy assets in particular, are riding high on super cheap money. For a whole host of risky assets, this is probably as good as it gets in terms of valuations. Arguing, as the Fed did in the excerpt above, that there’s more upside, is simply delusional.

The Fed is also not the first in line for payment. Derivative counterparties come before it does, per “Distribution of Proceeds” (p. 12, click to enlarge):

Bottom line: A financial institution that reported that the fair market value of its assets was $2.2 billion less than its liabilities would be regarded as insolvent. Management’s protestations that its assets would surely be worth a lot more in the future would be treated with skepticism. But the media has chosen to give the Fed a free pass on this one.