By Mike Kimel of Presimetrics

This post is going to be a bit different, at least for me. Generally I like to write things that are more data oriented, and that involve some pictures and figures. But this is a little story that happened to my wife and me, only a few weeks back, and I think it provides a bit of an illustration about how the economy works, or doesn’t, in these post-Housing Bubble days. It’s an absurd story, it makes no sense whatsoever, it cannot possibly happen in a civilized country, much less one that calls itself capitalist, but every word is true. So here goes…

My wife, deep into her third trimester of pregnancy, went out to run some errands with my mother and a family friend. It was pouring, and when they got back to the house, they saw a piece of paper stapled to a little tree at the end of our driveway. It was a notice from the Sheriff’s Department that our house was going to be auctioned off on October 1st.

Now, obviously it had to be a bad joke. After all:

1. We had only bought the house the previous year and were about two months ahead on our mortgage.
2. The plaintiff was CountryWide, which is not the company with which have a mortgage.
3. The name of the defendant from whom the home was to be foreclosed was not the legal owner of the house – that is to say, my wife or I. In fact, the name of the defendant was similar to the name of the previous owner of the home, but the spelling was definitely off.
4. From what we heard of Sheriff’s auctions, notices tend to be left on the door. Not stapled to a tiny little tree in the pouring rain.

But when my wife checked the Sheriff’s site on-line, it turns out that, indeed, our home was slated to be auctioned off on October 1st. Multiple calls to the Sheriff’s office were not returned. As to CountryWide – who exactly do you call at CountryWide? There’s no “Press 4 if you have no relationship with CountryWide but we’re trying to seize your house anyway.” Ironically, if we did have a delinquent CountryWide mortgage, getting somewhere with them might have possible as any of their call center representatives would have been able to handle taking a payment. But the situation we were in, that they put us in, isn’t one of the options that their call center seems equipped to sort out.

When it started to become obvious that a) this was deadly serious and b) there was a whole machine moving inexorably forward, my wife got nervous. She didn’t sleep at all that first night, and because she didn’t sleep, neither did I. And every roadblock we hit made us more exasperated at what was already a difficult time.

After a couple of days of trying the obvious remedies, we contacted our title company and called our attorney. And it took a while, but the upshot was that after a few weeks, we managed to stop the proceedings. CountryWide uses an external law firm to deal with the Sheriff’s office, and we managed to convince them that the process should be halted. Doing so meant showing we had the title and that we are the owners of record as far as the County is concerned. Additionally, thanks to the previous owner who helped us out here, we were able to show that CountryWide received a wire transfer when the previous owner sold us the house. Thus, we proved to CountryWide’s external legal firm that they had followed unlawful orders by putting in the request to have our home foreclosed. They in turn managed to get their contacts at CountryWide to give them the OK to contact the Sheriff’s department to put a halt to the process.

Though we’re no longer in danger of losing our home (as far as we know), I’m kind of upset right now at two parties. The first is CountryWide, for all the obvious reasons. But I also have a problem with the Sheriff’s department because from where I’m standing, it seems like its procedures are set up in such a way as to validate CountryWide’s mistakes. Let’s start with the note pinned to a tree in the pouring rain. What if we were traveling or the wind was just a little stronger? Would the note have been there when we got back? Would we even have known about the auction until after it happened?

Second, it appears that that the Sheriff’s department auctions off homes simply on the word of CountryWide or its outside attorney. A check of the County Tax Assessor’s Office would have told them there was a problem with CountryWide’s request, namely that the person they wanted to seize the home from doesn’t own it or have any rights to it whatsoever. (Actually, I also wonder why the outside attorney didn’t check any of this either.) And it isn’t as if CountryWide and/or the Sheriff checked but were working off outdated information; if the previous owner was truly the intended defendant, her name wasn’t even spelled right in the complaint which also should have raised some eyebrows. Worse, as per the above-mentioned wire transfer, CountryWide actually wasn’t owed anything at all by anyone.

In short, CountryWide was trying to collect on a debt that didn’t exist, supposedly owed by a person who they had wrongly identified, by seizing property owned by other people. And yet the Sheriff’s Department acted on their claim, and refused to give us, the party affected by that series of errors, so much as a return phone call.

The only conclusion I can reach from this is that there are no safeguards at all built into the system. None. After all, it would have taken only a trivial amount of due diligence by any of the parties (CountryWide, their outside attorneys, or the Sheriff’s office) to derail this crazy train before it started. However, I assume CountryWide would be against such checks, as they cost money. But guess what? This whole process has cost my wife and me money, time, frustration and emotional distress. It would make more sense to hit up CountryWide for an extra few bucks every time they ask the Sheriff to auction off a house than it does to force the victims of CountryWide’s errors to pay for the company’s mistakes. Fortunately, we could afford an attorney, and despite the whole pinning-a-note-to-a-straggly-tree-in-the-pouring-rain thing, we also had the time to mount a defense.

That doesn’t mean when things settle down a bit over here we aren’t going after CountryWide to make us whole. And my wife and I intend to have some communication with the Sheriff’s department to do what we can to make them tighten up procedures to prevent this kind of nonsense from happening to other people.

But, in the end, one definite legacy of this whole affair is that from here on out, every four to six months I plan to check the upcoming foreclosure auctions to make sure my house isn’t on the list. Which leaves just one more thing to comment on, and since I like to have illustrations in my posts, let me end with a picture. The resolution isn’t particularly good – it was taken on my phone – but it’s my favorite one so far: 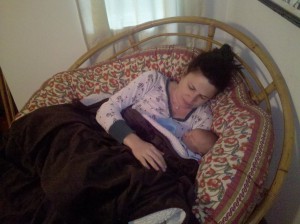