By Mike Konczal, a Fellow at the Roosevelt Institute.

No one else has been a stronger advocate for public disclosure. There’s a debate going on about who should be nominated to run the Consumer Financial Protection Bureau at the Federal Reserve. One side says Elizabeth Warren, while another says someone from Treasury, likely Michael Barr. At a quick glance you might not see a big difference. As Felix notes, Michael Barr is very strong on consumer finance. But I think Warren would be a far superior choice. There are many reasons why, but I want to discuss a very specific one here that distinguishes her from anyone in Treasury. The biggest: she is a strong critic of HAMP, Treasury’s largest intervention into the massive foreclosure crisis hitting millions of regular Americans, and she demands accountability on behalf of the people.

The Home Affordability Modification Program is widely considered to be a failure. Here is Shahien Nasiripour reporting on the latest numbers from June. They haven’t remotely hit the numbers they projected. Homeowners continue to suffer from a lack of modifications due to servicer problems and the overvaluation of their books. I wrote here about how the creator of the mortgage bond instrument in the early 1980s said in 2007 that a major market failure was coming. There was need for government action.

HAMP is such a failure that it is a bit of a game among the financial bloggers as to who has the best write-up of how bad it is each month and what the killer statistics are that prove it. I’m calling Stacy-Marie Ishmael over at FT Alphaville this month’s winner with BarCap vs HUD on HAMP.

Evidence shows that there are principal increases for 80% of the people who go through HAMP. That is the exact opposite of what you’d like to see! It lowers interest rates, but it also increases the length of the loan. 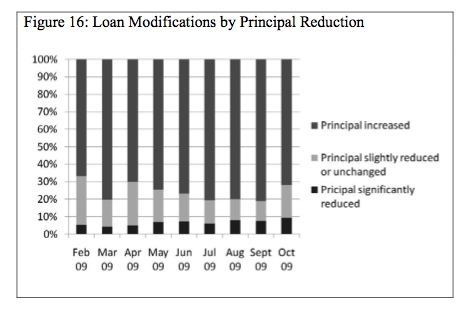 And for those who don’t have principal reduction, there is a massively high redefault rate. People lose their homes anyway, even after jumping through cumbersome hoops. 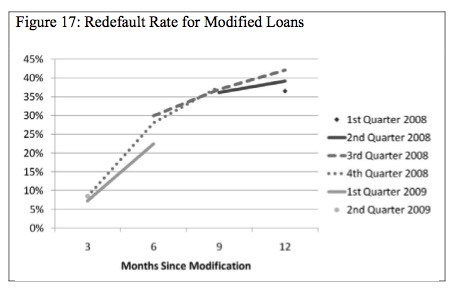 Predatory lending is hard to define, but a product is predatory that sinks people deeper into debt without the expectation that they can pay it off. And that is exactly how HAMP functions. For millions of people HAMP is their main interaction with the government and embodies what the government is capable of, and this creates disillusionment and discredits the liberal state in a profound way.

The Congressional Oversight Panel, lead by Warren, has been in the lead at making information public and bringing the complaints of the people straight to those in power. (It falls under her jurisdiction because HAMP uses TARP money.) When you see the fights on youtube between Warren and Geithner, the biggest ones, the ones that make Geithner cringe the most, it is about how HAMP isn’t working. Click through on that link to watch a video that gets straight to this. She demands accountability from the government and from the banking sector on the single most important issues facing Americans right now.

This is important. There’s pressure to be quiet, to hope that a quick housing and economic recovery will just make this whole foreclosure crisis go away. But Warren has demanded answers. COP released a report in early 2009 about the problems with HAMP, data collection and foreclosure, a report that still stands up. She’s done that at every step of TARP, but it matters here specifically for consumer protection.

And this is exactly how the CFPA should work. They fight to get good information disclosed to the public about how the banks and the Treasury department are failing the American people, reporters and wonks explain the information to the public, Treasury is held accountable. Treasury is currently working overtime to make HAMP work better; every month they are putting pressure where they can to make it better. That’s how a healthy government is supposed to work, but it can only be done if the tone is set by an outsider. And Elizabeth Warren is the one qualified candidate with a proven track record of standing up to the banks and to the Treasury.

And as Steve Clemons wrote: “It’s about time that at minimum, the White House got a ‘team of rivals’ on economic policy rather than just a ‘Team of Rubins.’”