Normally, I don’t reproduce or excerpt from John Mauldin’s popular e-newsletters, but today he features a writer I particularly like, uber bear Albert Edwards of Societe Generale.

To repurpose an old saw about pessimists, bears are bulls who have all the facts. Some of Edwards’ arguments, while well documented, aren’t new: employment stinks, the forward-looking manufacturing indicators say more deterioration is in store. But he has some interesting comments on the nature of bear markets, and why investors who believe that QE will keep equity values aloft are likely to be disappointed.

The current situation reminds me of mid 2007. Investors then were content to stick their heads into very deep sand and ignore the fact that The Great Unwind had clearly begun. But in August and September 2007, even though the wheels were clearly falling off the global economy, the S&P still managed to rally 15%! The recent reaction to data suggests the market is in a similar deluded state of mind. Yet again, equity investors refuse to accept they are now locked in a Vulcan death grip and are about to fall unconscious.

The notion that the equity market predicts anything has always struck me as ludicrous. In the 25 years I have been following the markets it seems clear to me that the equity market reacts to events rather than pre-empting them. We know from the Japanese Ice Age and indeed from the US 1930’s experience, that in a post-bubble world the equity market merely follows the economic cycle. So to steal a march on the market, one should follow the leading indicators closely. These are variously pointing either to a hard landing or, at best, a decisive slowdown. In my view we are poised to slide back into another global recession: the data is slowing sharply but, just like Japan in its Ice Age, most still touchingly believe we are soft-landing. But before driving off a cliff to a hard (crash?) landing we might feel reassured when we pass a sign that reads Soft Landing and we can kid ourselves all is well.

I read an interesting article recently noting the equity market typically does not begin to slump until just AFTER analysts begin to cut their 12m forward EPS estimates (for the life of me I can’t remember where I read this, otherwise I would reference it). We have not quite reached this point. But with margins so high, any cyclical slowdown will crush productivity growth. Already in Q2, US productivity growth fell 1.8% – the steepest fall since Q3 2006.Hence, inevitably, unit labour costs have begun to rise QoQ. This trend will be exacerbated by recent more buoyant average hourly earnings seen in the last employment report. Whole economy profits are set for a 2007-like squeeze. And a sharp slide in analysts’ optimism confirms we are right on the cusp of falling forward earnings (see chart below). 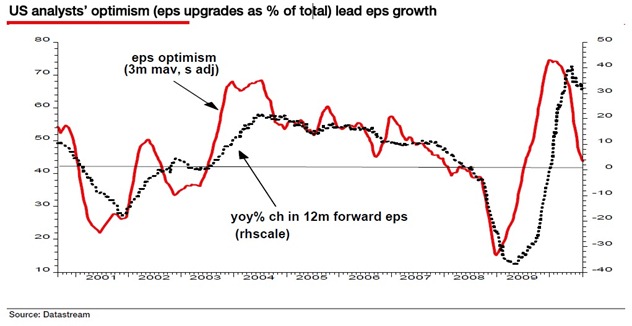 I love the delusion of the markets at this point in the cycle. It bemuses me why investors cannot see what is clear as the rather large nose on my face. Last Friday saw the equity market rally as August’s 67k rise in private payrolls and an upwardly revised July rise of 107kbeat expectations. But did I miss something? When did we switch from looking at headline payrolls to private jobs? Does the fact that government is shedding jobs not matter? Admittedly temporary census workers do mess up the data, but hey, why not look at nonfarm payroll data ex census? Why not indeed? Because the last 4 months run of data looks notably weaker on payrolls ex census basis than looking only at the private payroll data (ie Aug 60k vs 67k, July 89k vs 107k, June 50k vs 61k and May 21k vs 51k). But these data, on either definition, look dreadful compared to the 265k rise in April and 160k in March (ex census definition). If someone as pathologically lazy as me can find the relevant BLS webpage after a quick call to the BLS, why can’t the market? Because it is bad news, that’s why. 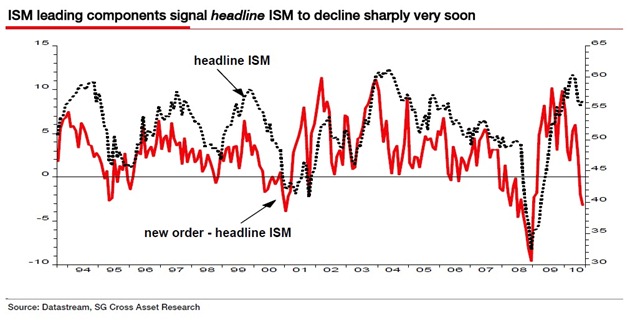 August’s rebound in the US manufacturing ISM was an even bigger surprise. This is a truly nonsensical piece of datum as it was totally at variance with the regional ISMs that come out in the weeks before. The ISM is made up of leading, coincident and lagging indicators. The leading indicators – new orders, unfilled orders and vender deliveries – all fell and point to further severe weakness in the headline measure ahead (see chart above). It was the coincident and lagging indicators such as production, inventories and employment that drove up the headline number. Some of the regional subcomponents (eg Philadelphia Fed workweek) are SCREAMING that recession is imminent (see left hand chart below). 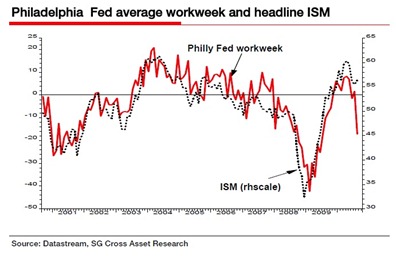 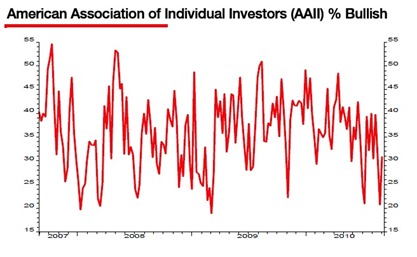 The real reason why markets reversed last week was that they got ahead of themselves. Aside from the end of 2008, government bonds were the most over-bought they had been over the last decade. And in equity-land the AAII two weeks ago recorded a historically low 20% of respondents as bullish (see chart above). These technical extremes will now be quickly worked off before the plunge in equity prices and bond yields resumes.

I am often asked by investors with a similar view of the world to my own (yes, there are some),whether the equity market will ever reach my 450 S&P target because of the likelihood that further Quantitative Easing will prevent asset prices from falling back to cheap levels.

Indeed we know that a central plank of the unhinged policies being pursued by the Fed and other central banks is to use QE to deliberately target higher asset prices. Ben Bernanke in a recent Jackson Hole speech dressed this up as a “portfolio balance channel”, but in reality we know from current and previous Fed Governors (most notably Alan Greenspan), that they view boosting equity and property prices as essential for boosting economic activity. Same old Fed with the same old ruinous policies. And by keeping equity and property prices higher, the US and UK Central Banks are still trying to cover up their contribution towards the ruination of American and British middle classes – (see GSW 21 January 2010, Theft! Were the US and UK central banks complicit in robbing the middle classes? – link).

The Fed may indeed prevent equity prices from slumping with any QE2 announcement. But this sounds a familiar refrain at this point in the cycle. For is monetary easing in the form of QE that different from interest rate cuts in its ability to boost equity prices? Indeed announced rate cuts in previous downturns often did generate decent technical rallies. But in the absence of any imminent cyclical recovery, equity prices continue to slide lower (see chart below). The key for me is whether QE2 can revive the economic cycle, not equity prices temporarily. 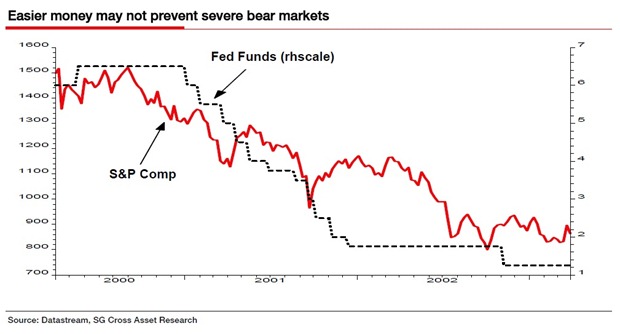 In the absence of a cyclical recovery I cannot see how QE is any different in its ability to revive asset prices than lower rates in anything other than a temporary fashion. (Interestingly many of our clients think QE2 might give a temporary fillip to the risk assets but that the subsequent failure to produce any cyclical impact will cause an extremely violent reaction as investors lose faith in QE as a policy tool and Central Banks in general.)

If we plunge back into recession, do not place too much confidence in the Central Banks having control of events. As my colleague, Dylan Grice, said last week “let them keep pressing their buttons.” Ultimately they cannot fool all of the investors, all of the time.