Martin Wolf, in today’s Financial Times, argues that the eurozone has done wonders for Germany by allowing it to keep the value of its currency down. With Germany’s persistent, large trade surpluses, the value of the deutschemark would eventually have risen, dampening Germany’s trade surpluses and forcing it either to accept a higher level of domestic consumption or greater unemployment.

This picture runs at odds against the stereotype of German industry, that its success is due to high levels of investment, attention to quality, a good workforce, etc. While all these things are no less true, consider: how would German businessmen have reacted if a German currency appreciated and stayed at a high level? They’d presumably shift operations to lower cost centers and reduce their level of domestic investment. They might also might be less keen to support high levels of infrastructure spending, since their operations would now make less use of it. And they might push for lower taxes to compensate for margin pressures at home.

In other words, they might adopt some of the bad behaviors of American executives.

So why….should Germans accept that they have an overwhelming interest in the success of the eurozone? The immediate answer is that the economy is hugely dependent on exports for demand (see chart). From 2000 to 2008 external demand generated as much as two-thirds of the growth in overall demand for German output. Germany needs both captive markets and a competitive exchange rate. The eurozone has delivered both, to an inordinate degree: the crisis in the periphery has dragged down the value of the euro; and many of Germany’s eurozone partners (who absorb two-fifths of its exports – nine times as much as China) are uncompetitive, after a decade of rising relative costs. 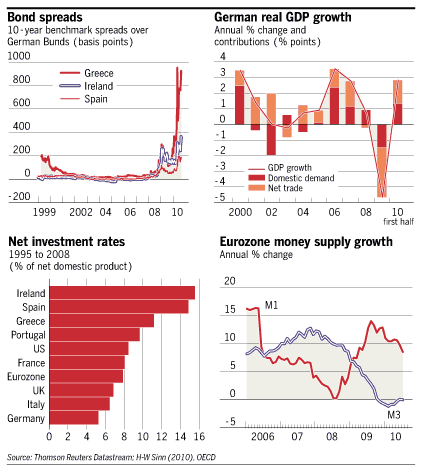 More important, imagine what would have happened, in the absence of the euro. The exchange rate of the D-Mark would have exploded upwards, as currency crises savaged the European economy, as happened in the 1990s. In peripheral Europe, currency depreciations would have been at least as big as, if not bigger than, sterling’s. The absence of such shocks has greatly enhanced the prospects for the German recovery. The creation of the eurozone was, for this reason alone, much more than a favour Germany did for its partners. It was also a big economic (not to mention political) gain for Germany. German industrialists are clear on this, as is the government.

Note how a cheap currency supports activities that look virtuous – high savings, investment in capital – but require other parties to run trade deficits (which implies they import capital, which usually means borrow) and consume. Mercantilism is a great model until your trade partners wake up and realize the real costs. As Niall Ferguson points out, “China gets 10pc growth: the US gets 10pc unemployment. That doesn’t seem the basis for a happy marriage.” And partners that can’t divorce often wind up making life miserable for each other.