By Steve Keen, Associate Professor of Economics & Finance at the University of Western Sydney, and author of the book Debunking Economics, cross posted from Steve Keen’s Debt Deflation.

The latest Flow of Funds release by the US Federal Reserve shows that the private sector is continuing to delever. However there are nuances in this process that to some extent explain why a recovery appeared feasible for a while.

The aggregate data is unambiguous: the US economy is delevering in a way that it hasn’t done since the Great Depression, from debt levels that are the highest in its history. The aggregate private debt to GDP ratio is now 267%, which is more than 30% down on the peak level of 298% achieved back in February 2009. 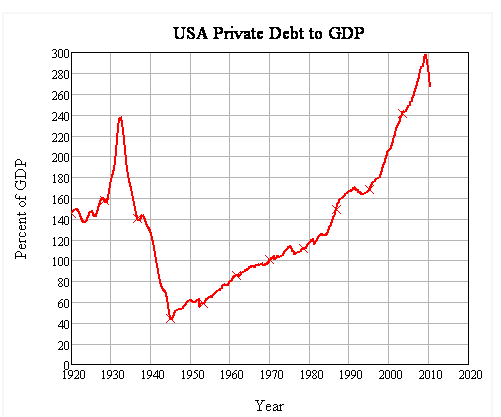 This dwarfs any previous post-WWII experience–even the steep recession of the mid-1970s. 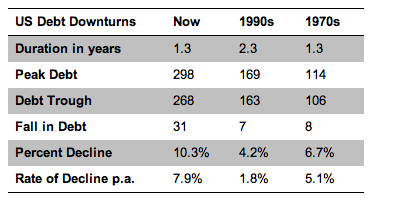 The aggregate level of private debt now towers over the economy, putting into sharp relief the obsession that politicians of all persuasions have had with the public debt. Rather like Nero fiddling as Rome burnt, politicians have focused on the lesser problem while the major one grew out of control. Now they are obsessing about a rise in the public debt, when in a very large measure that is occurring in response to the private sector’s deleveraging.

If they had paid attention to the level of private debt in the first place, then we wouldn’t be facing exploding public debt today.

However, though the decline in private debt is steep and continuing, the rate of decline has slowed. Because debt interacts with demand through its rate of change, this has given a stimulus of sorts to the economy in the midst of its deleveraging. 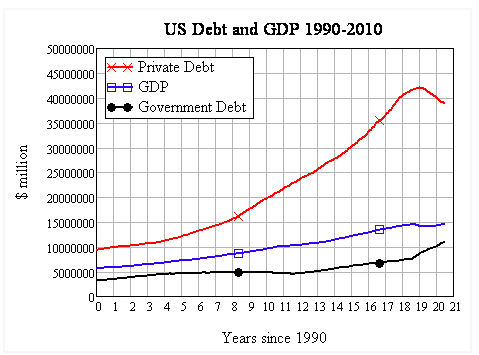 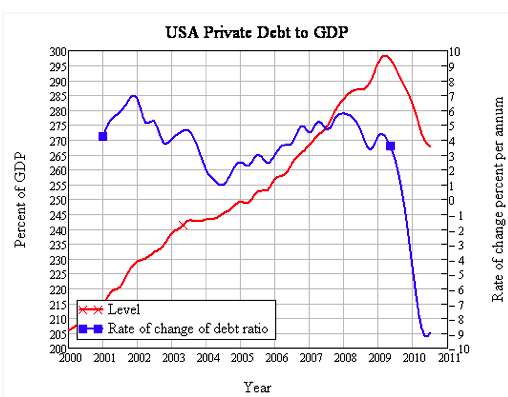 This is obvious when one considers aggregate demand as I define it: the sum of GDP plus the change in debt (where this demand is spread across both goods & services and the asset markets). Though debt levels are still falling, because they are falling less rapidly there has actually been a boost to aggregate demand from debt from the fact that debt is declining less rapidly in 2010 than in 2009: 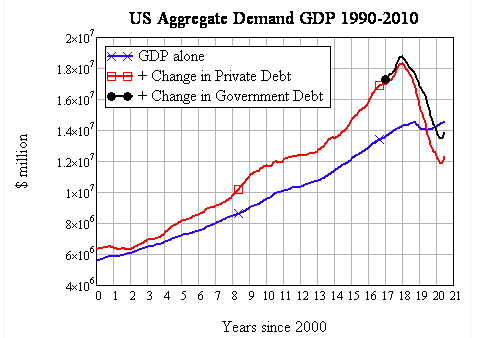 This is doubly so when the contribution to demand from the public sector is included, as this shorter term graph shows more clearly. 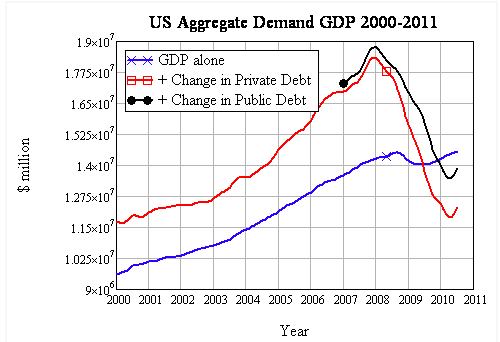 However while recent data shows a positive contribution to demand from debt falling more slowly, on an annualised basis, the change in debt is still subtracting from aggregate demand–and more so than in the previous year. So total demand (across all markets–commodity and assets) had to fall, even though GDP itself grew. Obviously most of the fall in demand has been absorbed by the asset markets, which have not recovered to the same level of turnover as in the boom years–and nor should they.

The next table, which uses the aggregate debt figure (public and private debt combined) from the Flow of Funds, shows that aggregate demand fell across July 2008 to June 2009, even though debt was still rising, because the rate of growth of debt fell from $3.7 trillion to $1.4 trillion. Across July 2009 to June 2010, the decline in aggregate demand was less than the previous year (a 9.7% fall versus a 15.2% fall), even though the change in debt had turned negative. 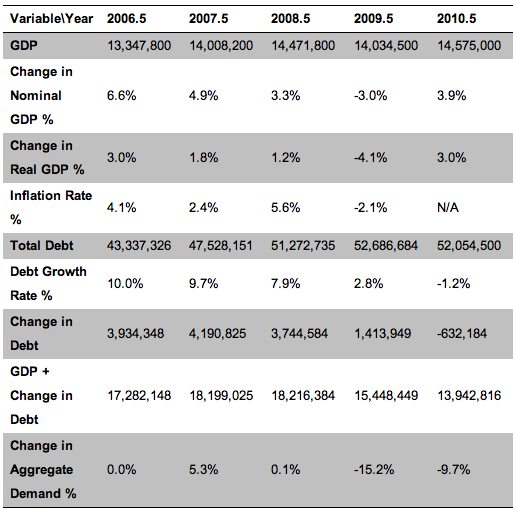 The rise in aggregate demand supported a recovery in employment, but the prospects of this continuing to the point at which economic activity booms once more are remote: with debt levels as high as they are, the potential for further deleveraging still exceeds the worst that the US experienced during the Great Depression. 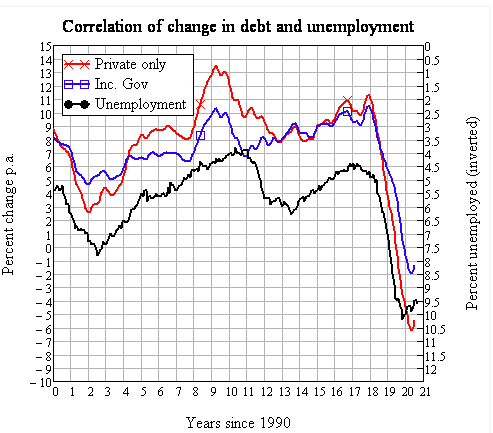 I have recently become aware of some other economists using a similar concept to my measure of the debt contribution to aggregate demand, which they call the “credit impulse” (Biggs, Mayer et al., http://ssrn.com/paper=1595980). They define this as the change in the change in debt, divided by GDP. The next few charts apply this concept using the recent Flow of Funds data, and shows why it is so important to consider the dynamics of debt when trying to understand why this downturn has been so severe—and why it also seems to have eased. Firstly, change in employment and change in real GDP are obviously correlated, and on this basis this downturn is bad, though not significantly worse than previous downturns in 1958, 1975 and 1983. However when you consider the correlation between the “credit impulse” and the change in employment, this crisis has no precedent in the post-WWII period: This is something that Keynes realized after writing the General Theory (Keynes 1936), but which never made its way into the textbook version of Keynes that conventional economists like Stiglitz and Krugman learnt as Keynesianism.

Planned investment—i.e. investment ex-ante—may have to secure its “financial provision” before the investment takes place; that is to say, before the corresponding saving has taken place. This service may be provided either by the new issue market or by the banks ;—which it is, makes no difference… let us call this advance provision of cash the ‘finance’ required by the current decisions to invest. Investment finance in this sense is, of course, only a special case of the finance required by any productive process; but since it is subject to special fluctuations of its own, I should (I now think) have done well to have emphasised it when I analysed the various sources of the demand for money. (Keynes 1937, pp. 246-247)

The good news in the latest Flow of Funds data is therefore that a slowdown in the rate of deleveraging can impart a positive impetus to employment. However the bad news is that the economy is now hostage to changes in the rate of deleveraging, from levels of debt that far exceed anything it has ever experienced beforehand. Since much of this debt was taken on to finance speculation on asset prices rather than genuine investment, it is highly likely that deleveraging will accelerate in the future, as speculators tire—literally as well as metaphorically—of carrying large debt loads that finance stagnant or declining asset prices.

Drilling down into the debt data, it’s apparent that the sector that caused the crisis—the finance sector—is the one that has delevered the most is also the one whose rate of delevering is slowing most rapidly. This is not a good thing, nor is it likely to last. The finance sector exists to create debt, and the only way it can do that is by encouraging the rest of the economy to take it on. If they were funding productive investments with this money, there wouldn’t be a crisis in the first place—and debt levels would be much lower, compared to GDP, than they are today. Instead they have enticed us into debt to speculate on rising asset prices, and the only way they can expand debt again is to re-ignite bubbles in the share and property markets once more. Here’s where the level of debt (when compared to income) matters, as opposed to its rate of change: reigniting these bubbles is easy when debt to GDP levels are low. But reigniting them when debt to income levels are astronomical is next to impossible. Speculators have to be encouraged to take on a level of debt whose servicing consumes a dangerously high proportion of their income, in the belief that rising asset prices will let them repay that debt with a profit in the near future.

With the debt to GDP levels for all non-government sectors of the American economy at unprecedented levels, the prospect that any sector can be enticed to take on yet more debt is remote. Deleveraging is America’s future.