More revelations from one of the epicenters of the housing implosion. 4ClosureFraud has published an eyepoppingly long list of affidavits of lost summons in foreclosure cases.

This is a teeny extract from their sample, so readers can see what their roster looks like: 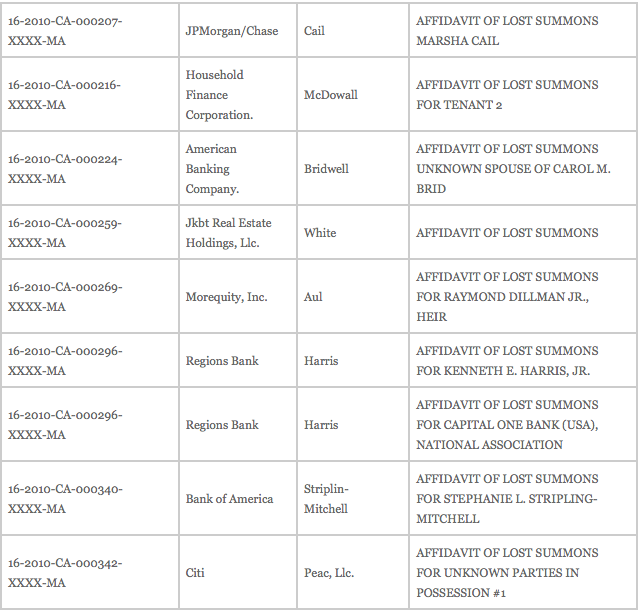 I spoke to the individuals who compiled this sample; the roster on the 4ClosureFraud site is from DuVal county only. They’ve pulled records from across the state and find similar high volumes in every county. They have refined their queries to exclude judicial notices that are not germane and are up to nearly 9000 questionable notices of lost summons, nearly all from 2010 (in three counties, they have gone into 2009 records). They are in the process of drilling back in time to come up with a more definitive figure.

Both judicial and non-judicial states require that the person being foreclosed upon receive some sort of notification that they are at risk of losing their home as a result of serious delinquency on their mortgage borrowings. In judicial states such as Florida, the first step is the service of process. As 4ClosureFraud noted:

Proper service of process initially establishes personal jurisdiction of the court over the person served. If the defendant ignores further pleadings or fails to participate in the proceedings, then the court or administrative body may find the defendant in default and award relief to the claimant, petitioner or plaintiff. Service of process must be distinguished from service of subsequent documents (such as pleadings and motion papers) between the parties to litigation.

One has to remember the timetable here: foreclosure notices take place during an active phase of the entire foreclosure process. What are the odds that these “lost” notices reflect legitimate lost documents, as opposed to failure to provide proper notice at all and lying to the court after the fact? The sheer volume strongly suggests the overwhelming majority are the result of the utter disregard of the foreclosure mills for due process. As noted earlier, this sample is from DuVal county (see the CA in the case identifier). And notice how many look bogus; they don’t even have the borrower’s name on them (“for unknown tenants/owners”, “for Mortgage Electronic Registry Services”; many in the name of Jane or John Doe).

It may seem incredible that the foreclosure mills aren’t bothering to provide summons; after all, how hard is it to provide service at someone’s home? All the process server needs to do is slip a notice under the door or tape it to their front door. But the foreclosure mills are processing cases in such volumes that performing this task has, well, become a tad inconvenient. An employee of one of the mills in Florida explained:

I worked at ProVest for 7 months a few years ago, as jobs are scarce. There were some issues there of some of the servers just “drop serving” the summons, (just leaving at the door and saying they gave it directly) or Sewer serves, (saying it was served and they never even left at the door). A few borrowers obtained legal counsel and executed their rights, as they were never properly served, but there are probably more borrowers unaware they have been “had”.

If Improperly served, the court dates cannot be set.

Due to ProVest’s aggressive style, and high volume of work, it is possible many servers, not direct employees, were forced to do the serves this way due to the volume and ProVest’s unrealistic expectations. They wanted a serve within 10 days of it being filed at the court house. As an employee, server or not, if you did not meet their outrageous timeframes it provoked what I call “public floggings” of employees. Not a nice place to work.

Yves here. Mind you, this is a report from a few years ago; foreclosure volumes have exploded since then. How hard is it to imagine that the foreclosure mills are simply skipping this step more than occasionally in districts with bank-friendly judges?

Make no mistake about it: the nature and scale of these frauds cut at the very heart of our judicial process. We didn’t call the Florida courts “kangaroo courts” lightly. A home is most people’s most important asset; shelter is a bedrock of personal security. Both the Fifth and the Fourteenth amendments enshrine the notion of due process, yet we see increasing evidence of it being violated on a routine basis in the Sunshine State.