I suppose I should be pleased, since readers wrote to inform me that Charles Gasparino of CNBC made mention of us on Friday (this clip, starting at 1:30) for our coverage of Lehman. However, I would have been happier if the statements made were correct. It’s remarkable that a seasoned journalist would assert that a critic of a company was short its stock, which implies an intent to manipulate its price, with no factual basis for that view, and no effort made to verify that statement. And indeed it is untrue, for I have never been short Lehman or indeed, any stock.

It’s even more remarkable that that same journalist called me a couple of hours later to threaten litigation over the accuracy of my reporting.

As readers of this blog hopefully recognize, we’ve been writing in the financial arena in the hopes of improving the quality of discussion and analysis. We believe in professionalism (despite our unfortunate propensity towards typos), fair reporting and critical thinking, with emphasis on overlooked stories and minority views when we think they have merit. I sometimes get it wrong; like reporters, bloggers are no better than their sources (and while we look for nuance, we can read things incorrectly). Nevertheless, we’ve sometimes had our contrarian perspective become mainstream, as with global warming and the seriousness of the credit contraction.

In this case, we took issue with on-air presentation of a a memornadum from Lehman that Gasparino said was internal and confidential, which presented material financial information that took place after Lehman’s last quarterly release. 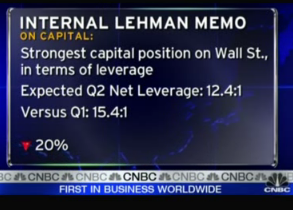 This information was presented without any analysis, definitions of terms (such as “liquidity position” at 2:00), or questioning of assumptions (except once when Gasparino said “if correct” relative to Lehman’s stock buyback numbers). Without proper disclosure and understanding how these figures and ratios were arrived at (for instance, as some firms have done with sales of CLOs and certain mortgage portfolios, were these sales financed?), one cannot assess veracity and significance.

I may only be speaking for myself, but I believe blogging has a useful role to play in combatting the inaccuracies and limitations of media reporting. Reporters have told me that companies are so adept at spinning stories that it is impossible to get to the bottom of them in a typical news cycle.

It appears that Gasparino has moderated his posture towards Lehman since reading this blog (although the dramatic selloff Friday may also have had an effect). In the segment where he said he had read our blog the night before, he went to some length to say his reporting was balanced. That’s a shift from his earlier segments on Lehman, where he was pro-Lehman, arguing against the accuracy and credibility of the so-called shorts. For instance, in his earlier reports, he repeatedly says that Dick Fuld is the more believable party, and once used as support the argument that Fuld rescued Lehman from the brink multiple times. Fuld has been CEO since 1993. The side of the issue that seems to have been lost is that Fuld is a recidivist CEO, one who repeatedly takes his company to the edge of survival.

Notice that it was never acknowledged that it’s difficult for a skeptic to analyze claims about financial performance that are made via internal company documents, for example, Lehman’s assertion that leverage levels have been reduced. This sort of campaign neuters any response, since all the critic can do is shadow box.

As for the shift in posture, don’t take my word for it; look at the segments yourself and decide.