Have you ever signed a document disposing of something valuable, like a house or your estate? Did you find you needed to get it witnessed, and that the witnesses couldn’t be family members, and had to put their addresses on the document too? Then it may surprise you to learn that you are following legal precepts established by a long dead Welshman; this one, in fact: 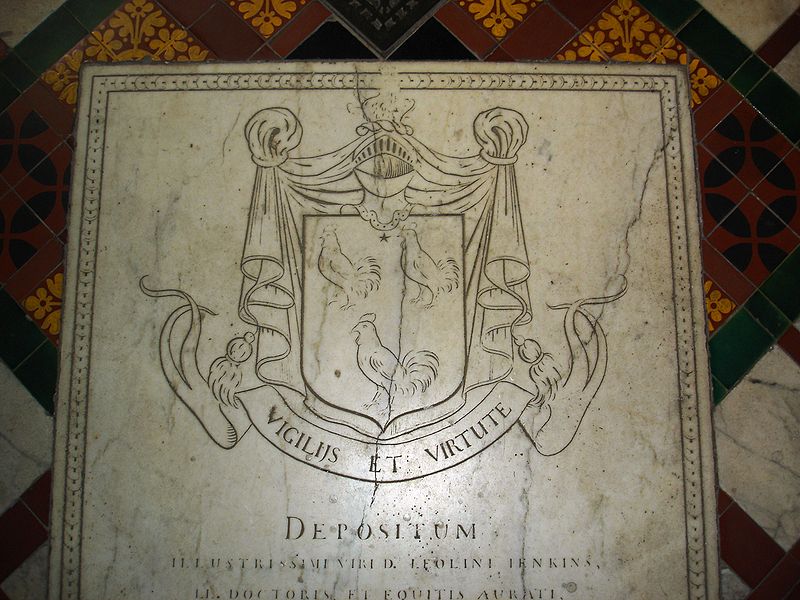 whose tomb is at Jesus College, Oxford; oddly, no more than ten minutes’ amble from where I am sitting, carving out this post. I like the way his “Llewellyn” has been semi-Englished to “Leoline”. Right now, he is probably spinning, at a fair clip, for he is the originator of the Statute of Frauds.

Here, via British History Online, is what the Statute of Frauds is for, in its original language:

For prevention of many fraudulent Practices which are commonly endeavoured to be upheld by Perjury and Subornation of Perjury Bee it enacted by the Kings most excellent Majestie by and with the advice and consent of the Lords Spirituall and Temporall and the Commons in this present Parlyament assembled and by the authoritie of the same That from and after the fower and twentyeth day of June which shall be in the yeare of our Lord one thousand six hundred seaventy and seaven All Leases Estates Interests of Freehold or Termes of yeares or any uncertaine Interest of in to or out of any Messuages Mannours Lands Tenements or Hereditaments made or created by Livery and Seisin onely or by Parole and not putt in Writeing and signed by the parties soe makeing or creating the same or their Agents thereunto lawfully authorized by Writeing, shall have the force and effect of Leases or Estates at Will onely and shall not either in Law or Equity be deemed or taken to have any other or greater force or effect, Any consideration for makeing any such Parole Leases or Estates or any former Law or Usage to the contrary notwithstanding.

As you see, the density of legalese hasn’t changed much since those days, though the spelling is different.

The “fraudulent Practices” that the Statute was designed to prevent grew up in the aftermath of the English Civil War, perhaps as various grudges were settled, or just as a kind of looting. Says this case notes specialist:

Our seventeenth century forebears, it seems, had realised the truth in the old adage that an oral contract was not worth the paper it was written on. The usual courtroom dramas about who had said what had gained an unsavoury edge in that some people were lying through their teeth in the witness box in order to support spurious agreements said to have been made orally. Parliament intervened and created five classes of contract for which a signed written record was required for the agreement to be enforced.

Actually, “unsavoury” is putting it mildly. This Canadian source (the Canadians inherited the Statute of Frauds, just as the US did – some version or other of it will tend to crop up in State laws) puts it thus:

By the middle of the 17th Century, the common laws courts were rather overworked with all the petitions to consider, that had been placed before them. One problem developed, and that was the professional witness. This witness would be someone with status in the community and their testimony would usually be accorded more weight than the average person.

Commercial activities were increasing at an exponential rate. There were lots of court cases, lots of witnesses and a lot of very good liars. In fact, witnesses might be offered a stake in the outcome of a case if their evidence were “truly favoured by the court”.

So, many cases simply came down to “one man’s word against another”. Really, this wasn’t entirely fair. From an historical perspective, there were landlords reclaiming vast ownership of properties, rather unfairly with a substantial coincidence in terms of similar facts and testimony.

Consequently, Charles II delegated the drafting of the Act to a loyal friend Sir Leo Jenkins who created the solution to the problem. Parliament enacted the Statute of Frauds and Perjuries in 1677. It was designed to prevent fraud. It did this, by insisting that certain contracts had to be in writing. These would be contracts that involved matters of considerable importance. Did John sell his farm to Peter? Yes, if Peter can produce a deed or a contract, and no, if the only evidence offered is the testimony of William who apparently overheard the two talking about the farm at a local pub.

In other words, perjury and corrupt process were the order of the day: some testimony was weighted more heavily than others, and money changed hands to help it happen. Unjust, and bad for business, too, as the courts got clogged up and commerce got entangled in disputes (sound familiar yet?). So stuff got put in writing. And, with the assistance of the contract law formulated in the Statute of Frauds modern capitalism takes off – by 1692 we have our central bank; by 1720 we have our first giant Bubble.

Now consider the impact of MERS (might as well be word of mouth), robosigners (corrupt process), dubious affidavits (perjury), neglect of the paper trail (sheer anarchy), and Florida courts that systematically favour some testimony (that of banks) over that of other participants in the foreclosure process.

We have been here before: that is the UK, pre-1677. Your servicers, robo-signers and the rest of the merry crew of crooks are set fair to unwind a third of a millennium’s worth of contract legislation that is key to the functioning of your economic system.

That is infrastructure neglect on an heroic scale, and it is why Sir Leoline Jenkins is no doubt spinning in his grave.