As readers may recall, the American Securitization Forum came out, in what it no doubt thought was guns-a-blazing style, to attack critics of securitization abuses. In particular, the ASF was taking aim at theories of the sort advanced on this blog, and later in Congressional hearings and in a Congressional Oversight Panel report, that the notes (meaning the promissory note, meaning the borrower IOU) in many cases, if not pervasively, had not been endorsed and conveyed as required by the pooling and servicing agreements, which are the contracts that govern mortgage securitizations. In other words, the industry had committed in contracts to investors to take some very particular steps to assure that the securitization complied with a host of legal requirements to assure that the investors got the benefits of the cashflows from the mortgages, and then proceeded to welsh on their deal.

Normally, this would not be such a big deal. Contracts are often breached; the usual remedy is to get a a waiver, which sometimes might involve a payment of some sort. But securitizations are particularly inflexible agreements. From the abstract of a 2010 paper by Anna Gelpern and Adam Levitin:

Modification-proof contracts boost commitment and can help overcome information problems. But when such rigid contracts are ubiquitous, they can function as social suicide pacts, compelling enforcement despite significant externalities. At the heart of the current financial crisis is a contract designed to be hyperrigid: the pooling and servicing agreement (“PSA”), which governs residential mortgage securitization. The PSA combines formal, structural, and functional barriers to its own modification with restrictions on the modification of underlying mortgage loans. Such layered rigidities fuel foreclosures, with spillover effects for homeowners, communities, financial institutions, financial markets, and the macroeconomy.

So given that the PSAs can’t be renegotiated, the securitization industry needs to find a way to argue that everything is hunky dory, despite the ever rising volume of lower court cases in which banks have had trouble foreclosing because borrower’s counsel challenges them to show that they are holders of the note (meaning not merely that they have possession, but that the securitization trust they represent is the owner). The big salvo was the ASF’s white paper, published last November, whose argument has been repeated and elaborated a tad. In effect, the white paper ignores the specific requirements of the PSA, and instead argues that “industry practices”, meaning the widespread disregard for contractual commitments, were OK. (We’ve taken apart the paper in previous posts, see here, here, and here)

As the white paper claimed:

While the real property laws of each of the 50 U.S. states and the District of Columbia affect the method of foreclosing on a mortgage loan in default, the legal principles and processes discussed in this White Paper result, if followed, in a valid and enforceable transfer of mortgage notes and the underlying mortgages in each of these jurisdictions. To be thorough, the White Paper undertakes a review of both common law and the Uniform Commercial Code (the “UCC”) in each of the 50 U.S. states and the District of Columbia. One of the most critical principles is that when ownership of a mortgage note is transferred in accordance with common securitization processes, ownership of the mortgage is also automatically transferred pursuant to the common law rule that “the mortgage follows the note.”

Despite the above cited authorities, the Massachusetts Land Court in a recent opinion cast doubt on the “mortgage follows the note” rule:

[E]ven a valid transfer of the note does not automatically transfer the mortgage. . . . The holder of the note may have an equitable right to obtain an assignment of the mortgage by filing an action in equity, but that is all it has. . . . The mortgage itself remains with the mortgagee (or, if properly assigned, its assignee) who is deemed to hold the legal title in trust for the purchaser of the debt until the formal assignment of the mortgage to the note holder or, absent such assignment, by order of the court in an action for conveyance of the mortgage. But . . .the right to get something and actually having it are two different things. U.S. Bank Nat’l Ass’n v. Ibanez, Nos. 08 MISC 384283 (KCL), 08 MISC 386755 (KCL), 2009 WL 3297551, at *11 (Mass. Land Ct. Oct. 14, 2009) (citations omitted).

The Ibanez case appears to stand in stark contrast to the principles embodied in the UCC. The Ibanez case is currently pending on appeal before the Massachusetts Supreme Judicial Court, that state’s highest court.

The paper, while mentioning Ibanez, nevertheless clearly viewed the lower court decision as an outlier, and asserted that the “mortgage follows the note” principle held in Massachusetts. But Massachusetts is a title theory state. As the Supreme Judicial Court said in its decision, taking the position opposite the one the ASF asserted was correct:

In a “title theory state” like Massachusetts, a mortgage is a transfer of legal title in a property to secure a debt. See Faneuil Investors Group, Ltd. Partnership v. Selectmen of Dennis, 458 Mass. 1, 6 (2010). Therefore, when a person borrows money to purchase a home and gives the lender a mortgage, the homeowner-mortgagor retains only equitable title in the home; the legal title is held by the mortgagee. See Vee Jay Realty Trust Co. v. DiCroce, 360 Mass. 751, 753 (1972), quoting Dolliver v. St. Joseph Fire & Marine Ins. Co., 128 Mass. 315, 316 (1880) (although “as to all the world except the mortgagee, a mortgagor is the owner of the mortgaged lands,” mortgagee has legal title to property); Maglione v. BancBoston Mtge. Corp., 29 Mass.App.Ct. 88, 90 (1990). Where, as here, mortgage loans are pooled together in a trust and converted into mortgage-backed securities, the underlying promissory notes serve as financial instruments generating a potential income stream for investors, but the mortgages securing these notes are still legal title to someone’s home or farm and must be treated as such.

Below is a map of title theory versus lien theory states: 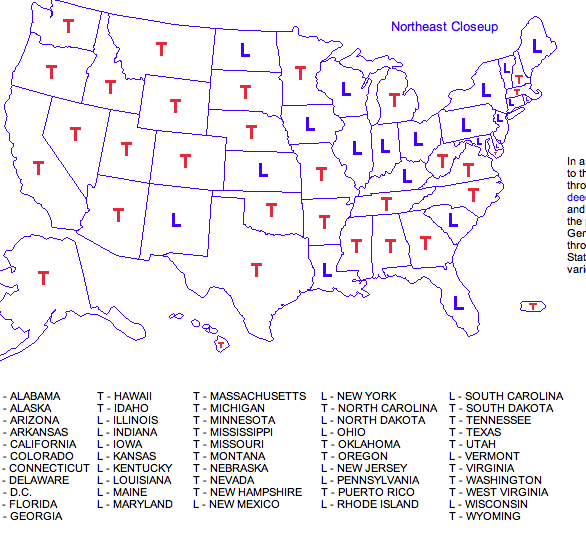 For the most part, title theory states are non-judicial foreclosure states.

So here the ASF managed to miss a whole raft of precedents that the Supreme Judicial Court saw as germane. And the ASF confidently asserted that the mortgage (the lien) always follows the note, when the Ibanez case suggests that other title theory states might come to a similar conclusion, that the lien also needs to be assigned. And in Massachusetts, the lien cannot be assigned in blank, because it is effectively a deed, meaning it conveys legal title to real estate. I am not certain to what degree other title theory states take that view. But even if Massachusetts in the only state to operate this way, it’s a significant enough exception to be worth taking note of in securitization procedures, yet no such effort was made.

As Tom Adams said in an e-mail:

If they were mistaken on such fundamental issues as “possession of the note trumps everything” and “the mortgage follows the note”, what else were they wrong on? How can anyone doubt, now, that the outstanding securitizations face some material risks that were not disclosed and not understood at the time the deals were made.

Even more important: how can any investor in current or future private label securitizations be comfortable that their investments are not exposed to significant material risks due to improper conveyance and why would anyone invest in such securities while these issues remain unresolved? If private label MBS have such uncertainties, how will a market for MBS outside of the guarantees of Fannie and Freddie ever really be rebuilt?

Yet as we have said before, the securitization industry seems convinced that denial is a viable business strategy.