One of the noteworthy features of 2007 was a pronounced divergence in sentiment between the bond and stock markets, with the credit indices sending out warning signals while equities continued to soar higher. This is hardly surprising; an old joke is that the bond market predicted 9 of the last 4 recessions.

We are seeing the same type of divergence again, this time in European bank stocks. And if the credit worry warts are correct, this could be a harbinger of bigger shocks. The Eurobanks are at the heart of the interlinked European sovereign/bank solvency crisis. The European market is also more connected to the US than most analysts chose to admit, with roughly 25% of S&P earnings coming from Europe. And with virtually all asset classes linked in the dynamic of “risk on-risk off” trades, an elevated risk reading in Europe would propagate to other markets.

According to one view of the world, reflecting credit market sentiment, European banks are more likely to default on their debt than at any time in the last few years, save for the peak of the financial panic in March 2009 and the worst moment of the Greek crisis in early summer last year. Another collective opinion, however, that of the equity markets, tells us that bank shares are relatively cheap…

The Markit iTraxx Europe Senior Financials index, which measures the cost of insuring against the default of a basket of senior unsecured bonds issued by 25 European banks, traded above 200 basis points on Monday January 10 for the first time since June last year. June 2010 was a period of heavy speculation about possible default on Eurozone government debt. The 200 basis points index level had only been breached once before, in early March 2009, and that reflected widespread panic about the safety of leading bank names.

The Markit iTraxx Europe Subordinated Financials index, meanwhile, hit 375 basis points in trading on January 10, well above any levels recorded in 2010 and only just shy of the record daily high of 405 basis points, hit on 9 March 2009, the day both credit and equity markets hit bottom.

By contrast with the credit markets, however, indices of bank equity prices are still well above the lows recorded during the worst of the financial crisis.

At Monday’s intraday (euro) price of 198.45, the Stoxx Europe 600 banks index, for example, an aggregate measure of European banks’ share prices, was 120% higher than on the March 9 2009 market bottom. The index is down by just over 15% from year-ago levels, and banks have been one of the poorer performing sectors in an equity market that’s been making positive ground. But we’re still nowhere near the crisis lows. 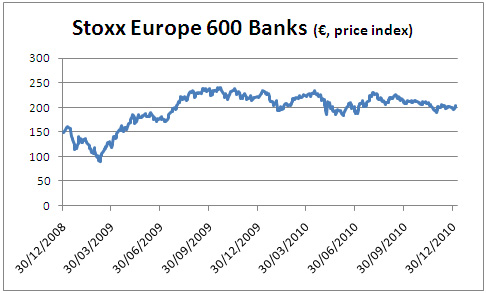 Yves here. One cause for the difference in readings may be uncertainty about bank resolution regimes. Negotiations are under way now, and credit market investors are reacting to the notion that they will be expected to be a hit. Stock market investors, ironically, appear more sanguine, either postponing judgment until details are worked out, or perhaps believing that the measures will never be used, given the fact that major banks are international, and bankruptcy laws in various nations are not being changed to accommodate bank wind-downs. Back to Amery:

Bank equity investors may simply not be paying that much attention to what’s going on in the credit markets, said Suki Mann, credit strategist at the London branch of Société Générale. Technical factors, such as the demand to hedge bank risk, may also be leading to the relative underperformance of credit indices, he explained.

“The equity market doesn’t seem to be focussing on default risk, while credit markets are,” said Mann. “The resolution regime only matters if a bank is restructured, so you could argue that, absent a default, equity investors don’t have to worry too much. Look at what happened to BP last year, for example – its credit default swap reached 600 basis points at one point, then two weeks later was at 85. Are the credit indices a real measure of bank default risk? I’d argue no – they are reflecting market sentiment more than anything.”

“There’s also demand by dealers to hedge the default risk of specific banks by using Markit’s broad credit indices for financials, since the market for credit default swaps in single bank names is thin,” explained Mann. “This is also contributing to the increase in credit index spreads.”

Perhaps bond investors are losing patience with the Perils of Pauline quality of Euromarket rescues (today, it’s Japan that has ridden in from stage right to save the distressed damsel, since the Germans appear to be tiring of the role) and want it to be over and done with, while equity investors cheerily assume that an euro breakup or even defection is just too messy, hence the authorities will muddle through somehow, which means the banks will be OK too. But like it or not, this drama will reach a resolution, perhaps sooner rather than later.