Yves here. This long and informative post on the pending train wreck in the Australian financial system might seem to be too narrow a topic for most Naked Capitalism readers, but it makes for an important object lesson. Australia managed to come out of the global financial crisis largely unscathed because its banks did not swill down toxic assets from the US (chump quasi retail investors were another matter) and it benefitted from the commodities boom.

Nevertheless, one might think its bank regulators might see what happened abroad as a cautionary tale. Mortgage debt took center stage in the crisis, and Australia is in the throes of a serious housing bubble. Yet as this post describes, the regulators seem asleep at the switch as to one of its major drivers.

By Deep T., a senior banking insider who is fed up with his colleague’s reliance on public support. Cross posted from MacroBusiness.

Previously I have posted on how the major banks recycle capital in The Capital Rort. I want to extend that subject by showing how mortgage ‘rehypothecation’ in Australia has led to the massive expansion in liquidity available to Australian banks which is at the root of the mortgage affordability issues in Australia and has put Australia’s banking system on the unstoppable path to collapse or government bailout.

What is rehypothecation? From “hypothecate”- to pledge collateral. Rehypothecation is the reuse or pledging of collateral received from one transaction in an entirely unrelated transaction. For more on the definition try this interview with Gary Gorton, Yale University finance economist.

To understand how rehypothecation applies to the Australian mortgage markets, I’m going to start with where the money comes from to fund our oversized mortgages and why? But to warn you, what I’m about to describe is not pure rehypothecation because the mortgage collateral is not directly passed to the lender but it is used to prop up the bank’s balance sheet, the strength of which the lender relies on. So the ultimate effect can be the same as rehypothecation. 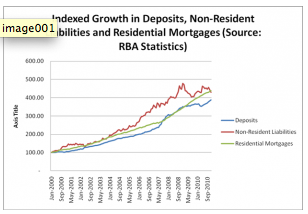 The graph represents a clear view of how offshore borrowings have funded Australia’s growth in residential mortgages both in size and number. However, there seems to be a puzzling change of trend in the last few months with deposits increasing at a greater rate and offshore borrowings decreasing. Maybe it’s not so puzzling. The following is the RBA’s definition of Deposits and Non-Resident Liabilities:

I have highlighted the relevant parts of the definition. I did a bit of a double take when I saw this. In simple terms, loans or liabilities from non-residents appear in both deposits and non-resident liabilities as defined by the RBA. I do not see this as any action that’s deliberately trying to deceive but rather a reflection of the poor information produced by the banks and reported to APRA. Does anyone really know how much non-residents have lent to Australian banks when non-residents in the deposit base are not identified?

My proposition based on the above graphs is that a considerable amount of what previously was properly defined non-resident liabilities have been transferred to deposits and that overall bank’s liabilities to non-residents continues its upward trend. This transfer is to the benefit of the offshore lenders but at Australia’s cost and risk. I have three reasons for my proposition.

Firstly, deposit rates are at all time high rates relative to the cash rate and bank bills. Please take a look at this site which gives a good summary of bank deposit rates across the board. With the CBA offering a 1 year deposit rate of 6.1%, would this tempt any non-resident investor? Maybe Bill Gross from PIMCO, the world’s largest fund manager, provides the definitive answer to that question when advising that investor’s portfolios perhaps should be:

…replaced with more attractive alternatives both from a risk and a reward standpoint. It is still possible to produce 4–5% returns from a conservatively positioned bond portfolio – you just have to do it with a different mix of global assets.

I think that’s one for the affirmative, Matilda.

Secondly, the increase in the strength of the A$ across most major currencies did not come about because of current account surpluses, we still have deficits. Global punters have been buying A$ and lending those A$s to Australia. Why they are doing this is not the point. The point is that if you buy A$s it must be used to buy assets or equities or as a loan or deposit. I’m betting on the later with the clear support of Mr Gross. For the moment anyway, I’m also sure that Mr Gross or any other possible investor does not care one iota that imposing this strength on the $A is slowly strangling Australia’s manufacturing, tourism and overseas student education sectors.

Thirdly and by no means the least of the reasons, is the credit risk of certificates of deposit. If an Australian ADI/Bank collapses, deposits are generally believed to rank ahead of other wholesale lending for repayment. That’s why deposit interest rates are considerably lower than other types of securities issued by banks. What the actual credit ranking is very complex? See for yourself.

Regardless, in an environment where in effect the Australian government has shown their willingness to step in and support our banks come what may, as a deposit holder in a major Australian bank, your risk is as good as the Commonwealth of Australia itself. Forget the Banking Act, the market believes that the Australian Government will not let any bank default on deposits but just may let defaults occur on wholesale funding. At over 6% for 12 months, I’m again betting that our Mr Gross thinks that’s great value “from a risk and a reward standpoint.”

In summary, because of deposit interest rates, FX strength of A$ and credit risk, offshore funds continue to pour into Australian banks but in a different and riskier form for Australians. Whilst I don’t have enough data, this is a provable proposition once data becomes available.

The last point on credit risk is what links me back to the continual rehypothication of Australian mortgages by the Aussie major banks. The offshore investors who are pouring money into Australia on an ever increasing basis do not want to worry about credit. It’s not their bailiwick. Absolute returns over the next year or so relative to the alternative global investment are what they are after. These money jockeys will plow funds into Aussie banks so long as relative returns continue and the perceived risk is not worth worrying about.

So for risk oversight they’re relying on APRA and for credit opinions on the rating agencies. I gotta tell you at this point my friends, I’m sure glad I’m not in either of those shoes. Relying on continual mortgage rehypothication to prop up the perceived credit risk and support capital levels (aka haircut) of the Australian banks is a very dangerous game.

It is a truism that any financial system that can continue to increase borrowings to meet liquidity requirements will not fail. The question is when or if the “continue” stops. My proposition for Australia is that it’s a “when” due to excessively aggressive mortgage rehypothication. Don’t get me wrong, like securitization, rehypothication is a valuable financial tool, so how did things get out of control?

In my post, “The Capital Rort”, I explained how the bankers were rorting the system to fill their fat wallets by reducing capital allocated to each mortgage as property values rise. Now we need to take that analysis to another level, to show how they’ve actually put Australia’s financial system on the relentless march to either collapse or further government rescue. But don’t be concerned about our friends the bankers as they’ll continue stuffing their wallets until this occurs and if offshore experience is anything to go by for sometime after that as well.

For information I’m going to refer to: the RBA publication, Australian Bank Capital and the Regulatory Framework by Adam Gorajek and Grant Turner.

Confirmation of the banks using internal models to determine capital for residential mortgages is given in words and numbers. The words:

Some banks, including the four largest, use an alternative Internal Ratings-based approach whereby risk weights are derived from their own estimates of each exposure’s probability of default and loss given default.

But also from Table 2 in the paper as it relates to residential mortgages:

Under APRA’s Prudential Standard APS 112, the lowest standard risk weighting for mortgages is 35% for a standard mortgage with an LVR of 60% (Table 4). The above table produced by the RBA states that the average weighting across the whole ADI mortgage book is only 26%!

Clearly the internal risk models are gaining an incredible regulatory capital advantage for those banks that use them. With risk-weighted assets allocated capital at the rate of 8% the total amount of regulatory capital required against the total $1.157 Trillion mortgages on the banks books is only $24 billion a rate of a touch above 2%. Are you shocked?

Ok, so how much capital is behind the mortgage insurers? The vast majority of mortgage insurance is provided by just 2 companies ie Genworth and QBE LMI (formerly PMI). An analysis of the accounts should reveal the capital held against the risk of Australian mortgages. Well, be my quest. For Genworth and for QBE. I could not figure out from these published accounts, the very simple piece of information that is, how much capital is held against Australian mortgage risk?

At this point, and although I cannot produce public information to support my case, I need to use my knowledge of the capital position of the mortgage insurers. To the nearest percent, the collective capital base of Genworth Australia and QBE LMI against approximately $600bn of Australian mortgages is 1%.

So in simple terms the total amount of capital in Australia dedicated to the risk on $1.157 Trillion of mortgages is approximately $30bn. How did this occur and how is it being allowed to continue?

It occurred because APRA allows the capital requirements of banks and insurers to be adjusted down as the value of the collateral behind mortgages increase. For collateral, see house prices. But those organizations make more and more money by writing bigger and bigger mortgages. So APRA and regulation have created a system which incentivises the lenders and insurers to take more and more risk on the basis that bigger and more loans reduce the risk of the mortgage book.

This is absurd. But every participant has their snout in the trough, all the while publicly espousing the quality of Australian mortgages. When all they’ve done is expose every Australian to massive systemic risk. How can we believe that in a country which has the most unaffordable housing in the world also has one of the lowest mortgage risk? If it quacks like a duck…

However, no system is sustainable without a continual money supply which is where the rehypothecation of mortgages comes to the fore. By continually revaluing the mortgage collateral to support further borrowing without needing to provide significant amounts of extra capital (hair cut, in securities rehypothecation), provides the turbo charge to excessive lending and the relentless march to systemic failure or government rescue. But this is done by piling more and more risk on every Australian, not just homeowners, not just by using the artificially created equity that may accrue in a house but also the real equity, which provides the base that spins money flow through excessive rehypothecation. This has all occurred under APRA’s reign and encouragement, so much for reliance on public institutional oversight.

So when will the money wheel stop and the gangs take over the highways? I have a few ideas on that but it’s certain that it’s not never.