Yves here. I thought this post was useful not only in describing how high food prices posed a particularly difficult policy problem for North African countries, but also in providing important background.

By Ronald Albers and Marga Peeters; cross posted from VoxEU.

World food prices are now even higher than their peak just before the global crisis. During periods of high commodity prices, North African and Middle Eastern governments have a long tradition of subsidising food and fuel products. But this column shows that food price inflation and consequently subsidies were also high during periods when global commodity prices were falling. Now these countries have an opportunity to correct this.

Just before the global crisis struck in September 2008, food and fuel prices soared, pushing up inflation in most countries (see for example, Tangermann 2008 and Conceição and Mendoza 2009 on this site). The impact was particularly large in North Africa and the Middle East (such as Algeria, Tunisia, Libya, Egypt, Israel, Jordan, Palestinian territories and Syria) where food constitutes a large share of consumer spending. Only those countries with more developed agricultural sector, such as Morocco, escaped to some extent from a rise in its consumer price inflation due to the available domestic supply of basic commodities.

In 2009, the global crisis reduced the global demand for food and fuel and subsequently stopped the surge in global commodity prices. On its own, this lower inflation was a welcome blessing, notably in countries such as Egypt where annual consumer price inflation had reached 24% in August 2008. 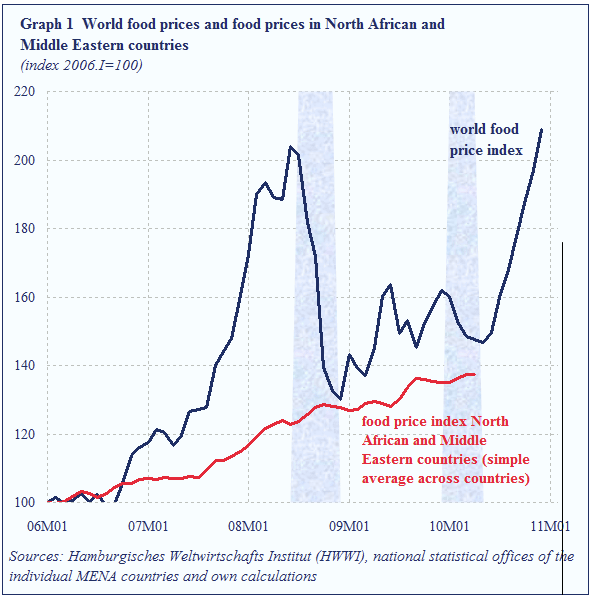 The impact of the soaring commodity prices on public finances

Governments in North African countries have a long tradition in subsidising food and fuel – and higher prices have led to higher spending. Across these countries, the impact of the subsidies on the fiscal balances varies but subsidies take up at least 10% of current government expenditures in most countries (see Albers and Peeters 2011, and Figure 2). 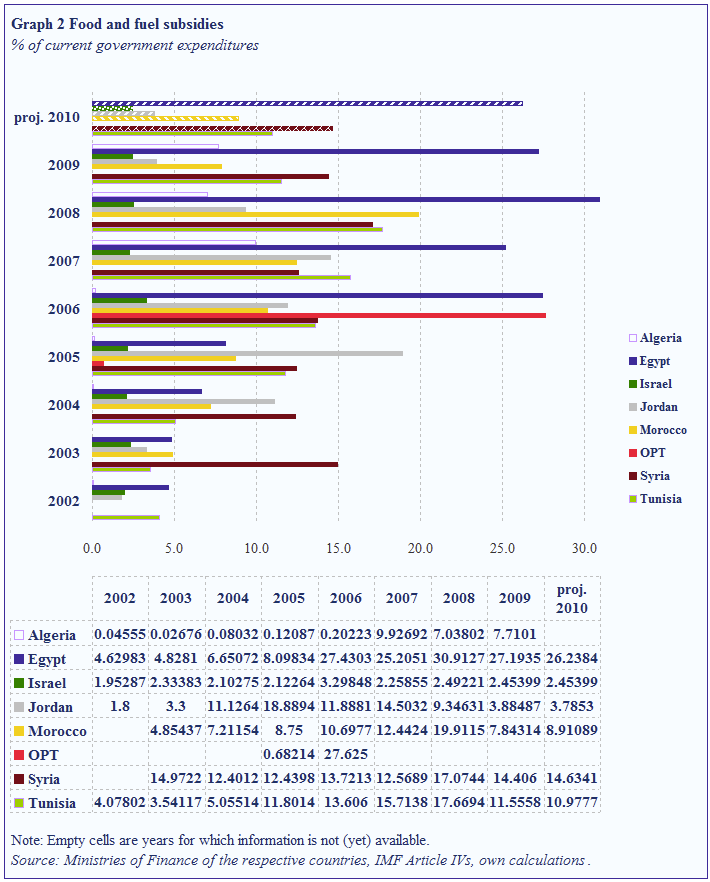 The dilemma for policymakers and possible ways out

Cutting down these subsidies, particularly for food, is extremely difficult for governments. The recent (successful) revolts by the public in Northern African countries, but also earlier revolts that took place at a smaller scale just before the global crisis, show the pressure on the North African and Middle Eastern governments. Reforming the subsidy system on food would add to the unrest.
Reforms in food subsidy systems directly imply that the basic necessities will become more expensive, which would disproportionally affect the poorest families. In addition, from a macroeconomic perspective, consumer price inflation that has already been high for many years would rise even more. Cutting subsidies implies higher final consumer prices and this would immediately make it harder for the monetary authorities to achieve price stability. The fiscal and monetary authorities therefore face a dilemma:

Not cutting subsidies implies that their fiscal balances remain in a bad shape.

Cutting subsidies deteriorates the purchasing power of consumers, where the poorest will be disproportionally affected

Between the two extremes of cutting and not cutting subsidies, there are however intermediate solutions. One solution is to phase out subsidies gradually, which is already high on the reform agenda in some countries (Jordan and Egypt). This gives the fiscal authorities gradually more room to manoeuvre in their choices for fiscal spending and consumers and monetary authorities can also gradually adjust to the new prices. Alternatively, a solution lies in a more precise system of targeting subsidies in such a way that only the people that are in need of the subsidies receive them (a policy that, among others, Egypt started). This measure is not easy to implement as family income needs to be determined and a cut-off line needs to be drawn. But if this policy can be implemented, two important objectives would be achieved:
I

t would help improve fiscal balances by creating more room for manoeuvring on discretionary spending, and

it would not hit the poorest consumers.

Yet, as shown, inflation came down only little in the North African and Middle Eastern economies (see also Peeters and Strahilov 2008). This is puzzling. Apparently there are factors that prevent domestic food prices from dropping. These downward rigidities can come from several domestic sources that must lie in the domestic food production and distribution chain that starts at the point where basic food products are imported at a country’s borders until the point where the finished food product is sold to the consumers.

The collective governmental organisation of importing basic food products at the world markets or monopolistic behaviour, price speculation on the scarce products at the domestic market, or (superfluous) intermediaries in the food chain must have been impacting food prices and driving them up, despite the sharp drops of prices at the world markets.

If domestic food prices are not only pushed upwardly by positive world price shocks, but also domestically by non-functioning markets, the fiscal authorities need to not only seek the solution for reforming the subsidy system to achieve lower subsidy spending in phasing-out subsidies or direct targeting of subsidies. Policy actions should also be taken to allow a better functioning of the markets, such as the breaking down of (government) monopolies, reducing the food supply chain, stimulating more competition in the private market to import and trade in agri-food and the food distribution business.

Econometrically, the existence of the downward rigidities in food inflation follows directly from inflation regressions. Consumer price inflation is explained by, among others, world food inflation split into decreases and increases in annual world food inflation. It follows that negative world price changes are insignificant in North African and Middle Eastern countries. This implies that inflation does not go down in case world food prices drop. In order to show the contrast with other countries, this analysis is also performed for a similar size group of most recently acceded EU countries. The results of this analysis show that negative adjustments in world food prices significantly depress inflation in these countries. Thus, inflation easily goes up but hardly goes down in North African and Middle Eastern countries while in other countries inflation drops in response to negative shocks. Our simulation (Figure 3) illustrate this point based on our econometric results.

Figure 3a. Response of CPI inflation to a 10% shock in world food prices 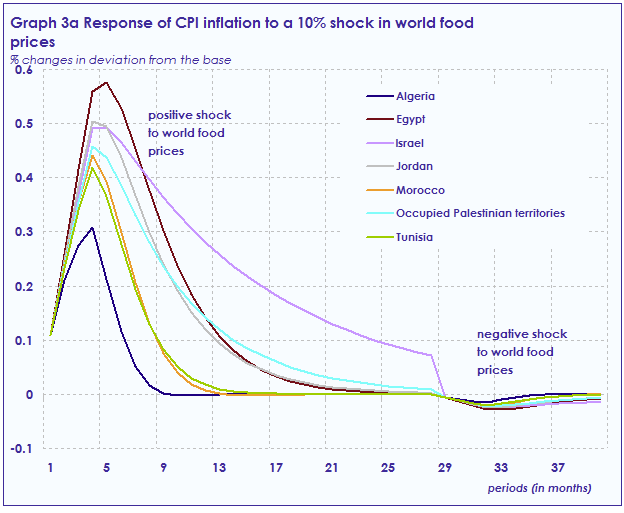 Figure 3b. Response of CPI inflation to a 10% shock in world food prices 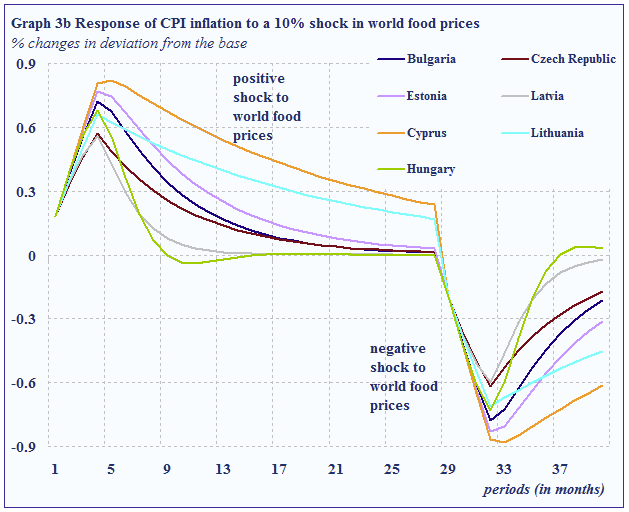 Apart from the non-functioning domestic food markets, another relevant point is the policy reaction of some governments to the soaring consumer price inflation. Instead of tackling the main causes for the high food prices, wages were regularly raised in the public sector in order to compensate government employees for the loss in purchasing power (notably, this happened in Egypt and Jordan). This not only creates an even sharper difference between the public and private sectors than the already existing big difference. It also fuels inefficiencies and monopoly keeping in the food supply chain that is by and large part of the public sector. Moreover, raising wages in the government sector can accelerate a price-wage spiral. Wages should not be raised in response to higher inflation. Taking policy measure to achieve a well-functioning of the domestic food supply chain according to market standards is the highest priority.

The current political changes in the south Mediterranean region offer an opportunity to take these type of reform measures.