Of the many origins of the global crisis, one that has received comparatively little attention is income inequality. This column provides a theoretical framework for understanding the connection between inequality, leverage and financial crises. It shows how rising inequality in a climate of rising consumption can lead poorer households to increase their leverage, thereby making a crisis more likely.

The US has experienced two major economic crises during the last century – 1929 and 2008. There is an ongoing debate as to whether both crises share similar origins and features (Eichengreen and O’Rourke 2010). Reinhart and Rogoff (2009) provide and even broader comparison.

One issue that has not attracted much attention is the impact of inequality on the likelihood of crises. In recent work (Kumhof and Ranciere 2010) we focus on two remarkable similarities between the two pre-crisis eras. Both were characterised by a sharp increase in income inequality, and by a similarly sharp increase in household debt leverage. We also propose a theoretical explanation for the linkage between income inequality, high and growing debt leverage, financial fragility, and ultimately financial crises. 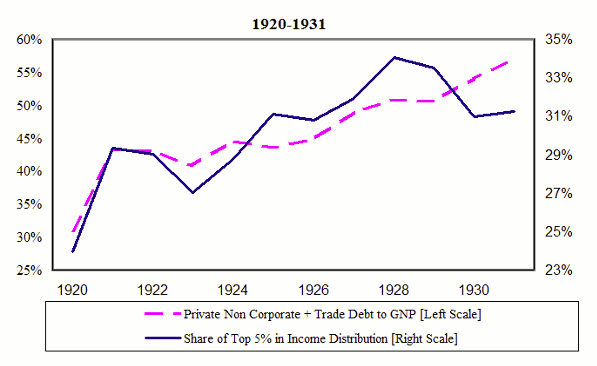 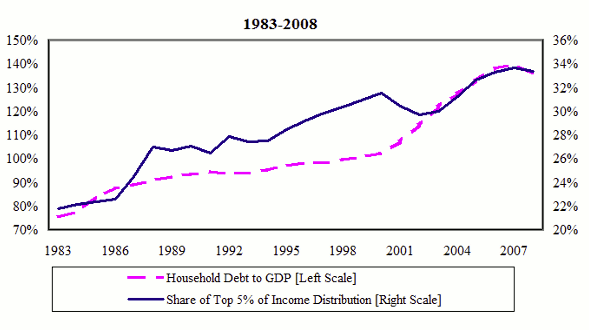 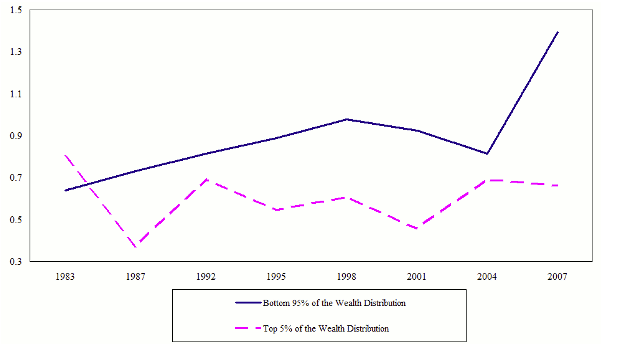 Borrowing and higher debt leverage appears to have helped the poor and the middle-class to cope with the erosion of their relative income position by borrowing to maintain higher living standards. Meanwhile, the rich accumulated more and more assets and in particular invested in assets backed by loans to the poor and the middle class. The consequence of having a lower increase in consumption inequality compared to income inequality has therefore been a higher wealth inequality.

The share of the financial industry in GDP doubled as well, from 4% to 8%. As borrowers’ debt leverage increases, the economy becomes gradually more vulnerable to the risk of financial crises. When a crisis eventually materialised in the fall of 2008, it was accompanied by a generalised wave of defaults, with 10% of mortgage loans becoming delinquent, and a sharp output contraction.

The link between inequality, debt, and crises

The link between income inequality, household debt leverage, and crises has recently also been discussed in the books of Rajan (2010) and Reich (2010). But these authors do not make a formal case to support their argument. This matters because there is a debate as to whether high debt levels were primarily driven by the demand for credit, as in Rajan (2010), or by the supply of credit, as in Levitin and Wachter (2010).

In our work, a general equilibrium model allows us to reconcile both views, by way of a shock that simultaneously increases the supply and demand of credit. Our model has several novel features that are motivated by the stylised facts above.

First, households are divided into a top 5% income group that derives all of its income from returns on its ownership of the economy’s capital stock and from interest on loans, while the remaining 95% earn income through wage labour. We refer to these groups as investors and workers.

Third, wages are determined by a bilateral bargaining process between investors and workers that is subject to persistent shocks.

Fourth, following the “capitalist spirit” specification of Carroll (2000), investors have preferences not just over consumption, but also over the ownership of physical capital and financial assets.1 This implies that investors will allocate any increase in income gained at the expense of workers to a combination of higher consumption, higher physical investment, and higher financial investment. The latter consists of increased loans back to workers, thereby allowing the latter to continue to maintain sufficient consumption levels to support the economy’s production.

The baseline results are shown in Figure 3. The horizontal axis represents time, with the shock hitting in year 1 and the final period shown being year 50. A slow-reversing shock to the distribution of incomes in favour of investors generates a gradual increase of the debt-to-income ratio of the bottom group. 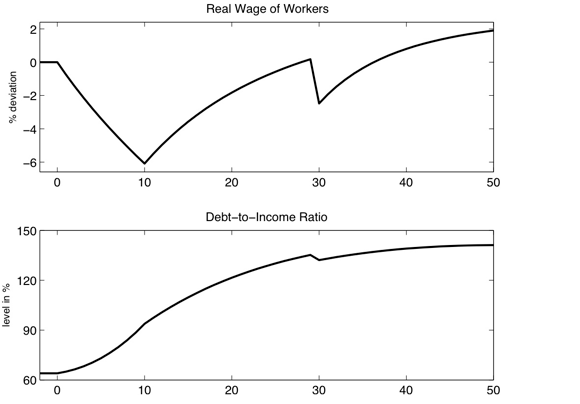 In our closed economy set-up, the increase in leverage of the bottom 95% is made possible by the re-lending of the increased disposable incomes of the top 5% to the bottom 95%, resulting in consumption inequality increasing significantly less than income inequality. Saving and borrowing patterns of both groups create an increased need for financial services and intermediation. As a consequence the size of the financial sector increases. The rise of poor and middle income household debt leverage generates financial fragility and a higher probability of financial crises. With workers’ bargaining power, and therefore their ability to service and repay loans, only recovering very gradually, the increase in loans and therefore in crisis risk is extremely persistent.

In our model, a crisis materialises in period 30. It is characterised by large-scale household debt defaults on 10% of the existing loan stock, accompanied by an abrupt output contraction as in the 2007-2008 US financial crisis, which is modelled as a destruction of physical capital.

The crisis barely improves workers’ situation however. While their loans drop by 10% due to default, their wage also drops significantly due to the collapse of the real economy, and furthermore the real interest rate on the remaining debt shoots up to raise debt servicing costs. As a result their leverage ratio barely moves, and it in fact increases further later on so that by year 50 it is above its pre-crisis level, with a very slow reduction thereafter.

A number of factors could make the increase in leverage even worse.

First, if capital owners allocate most of their additional income to consumption and financial investment rather than to productive investment, leverage increases much more because workers’ income does not benefit from a higher capital stock.

Second, if the rate at which workers’ bargaining power recovers is even slower than in the baseline, then even a financial crisis with substantial loan defaults of 10% of all outstanding loans provides little relief, with leverage continuing to increase for decades post-crisis, and making repeated financial crises very likely.

Third, if the subsistence level of consumption is significantly higher than in the baseline, households borrow more aggressively to avoid what they perceive as a catastrophic drop in consumption.

A chance of success

There are, however, two possibilities for a successful deleveraging of households.

The second possibility, which is illustrated in Figure 4, is a restoration of workers’ bargaining power and therefore income that allows them to work their way out of debt over time. Leverage drops immediately, but due to a higher income level rather than a reduced loan stock. More importantly, and unlike under a debt reduction, leverage goes onto a declining path that immediately starts to reduce the probability of a further crisis. 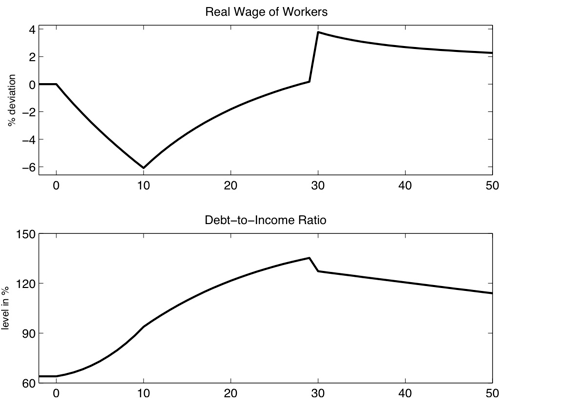 This line of research could be extended to an open economy setting. An increase in lending by high income households would then extend not just to domestic poor and middle income households, but also to foreign households. The counterpart of this capital-account surplus in the foreign country would of course be a current-account deficit. In other words, this approach provides a potential mechanism to explain global current-account imbalances triggered by increasing income inequality in surplus countries.