Yves here. As we noted in January,

Treasury Secretary Timothy Geithner is trying to duck the assignment given the Financial Stability Oversight Council under the Dodd Frank legislation, namely, that of identifying “systemically important” financial institutions….The Treasury devised a list of banks it subjected to stress tests; conceptually, how is this process any different?

I’m pleased to see four professors from New York University’s Stern School take up this task. And they end their analysis with a rebuke:

This is the easy part for the Financial Security Oversight Council. The tough part is to then design efficient regulation that discourages the build up of excessive risk.

As part of the US policy response to the global crisis, the Dodd-Frank Financial Reform Act calls for regulators to identify systemically risky financial firms – the sort that took the US financial crisis global. But how to identify these firms remains unclear. Some claim the task is impossible. This column begs to differ and names the 10 most systemically risky financial firms in the US.

The Financial Stability Oversight Council is beginning to confront its various mandates under the Dodd-Frank Financial Reform Act. These include implementation of the Volcker Rule, the establishment of concentration limits for financial firms, and the procedures for designating systemically risky financial “utilities” (Acharya et al 2010). While all of these steps may enhance financial stability, arguably the most important step is the identification of systemically risky firms. After all, the market failure of the financial crisis was that firms created massive amounts of systemic risk without “paying” for it.

It was somewhat disconcerting that Treasury Secretary Timothy Geithner, who is the Chairman of the Financial Stability Oversight Council, believes “creating effective, purely objective criteria for evaluating systemic risk is not possible” (Nicholson 2011).

This simply isn’t true. And, the Council’s initial proposals miss what is the critical element in such risk assessment, which is the extent of correlation between the risk of a firm and the whole financial sector. Their primary focus on firm size and firm capital (based on current risk assessments) misses this entirely.

Objective criteria can identify the majority of systemically risky firms and their contribution to risk. And if a few are missed, the Council can add to the mix using more subjective information.

While the financial crisis started in the summer of 2007, it was not until the early autumn of 2008 that systemic risk fully emerged. Around this time, Fannie Mae, Freddie Mac, Lehman Brothers, AIG, Wachovia, Washington Mutual, and effectively Merrill Lynch and Citigroup, all failed. An important insight is that this risk was due not just to these failed financial firms, but also to other large banks, investment banks, and insurance companies that were struggling. In a financial crisis, it is the capital shortfall in the system as a whole that causes financial markets to freeze with devastating follow-on effects for the real economy.

And after the capital shortfall in late 2008, over the next 3-4 months, the economy fell off a cliff. Stock markets worldwide fell between 40%-50%, GDP dropped 3% in developed nations and international trade fell 10%. The link between the financial sector’s undercapitalisation and economic collapse is unmistakable. For that reason alone it is imperative to measure the build-up of systemic risk.

The first step then is to be clear about what constitutes systemic risk. A natural assumption is that systemic risk emerges when the aggregate financial sector falls short of capital, and that the costs of this risk increase with the magnitude of the shortfall. Given this assumption, everything follows. Economic theory provides a precise measure of systemic risk for a financial firm (see for example Acharya 2010a, 2010b). It consists of two parts. First, the costs to society of a systemic crisis measured per dollar of capital shortage in entire financial sector, times a second part which is the firm’s anticipated contribution to the capital shortage in that sector.

The first term – expected systemic costs – is difficult to measure precisely, but it is the same for all firms, so it has no impact on which firms are systemic on a relative basis. The second term, formulated as the anticipated percentage contribution of the institution to costs incurred in a financial sector collapse, is clearly measurable.

With our colleagues at the NYU Stern School of Business, we have done just that using publicly available stock return and balance-sheet data for financial firms in the US. We are currently in the process of expanding our work to European and Australasian firms. The analysis is provided as the measure SRISK% (% contribution to systemic risk) on the NYU Stern Systemic Risk Rankings page here.

First, it estimates the daily drop in equity value of this firm that would be expected if the aggregate market falls more than 2%. This is called Marginal Expected Shortfall (MES). The measure incorporates the volatility of the firm and its correlation with the market, as well as its performance in extremes. These are estimated using asymmetric volatility, correlation and copula methods similar to those in other sections of VLAB (for econometric details see Brownlees and Engle 2010).
In a second step this is extrapolated to a financial crisis which involves a much greater fall (eg, 40%) over a much greater time period (six months).
Finally, equity losses expected in a crisis are combined with a measure of the financial firm’s leverage (LVG), measured using current equity market value and outstanding measures of debt, to determine how much capital would be needed in such a crisis. A firm is assumed to require at least 8% capital relative to its asset value.
Then, the Systemic Risk Contribution, SRISK%, is the percentage of financial sector capital shortfall that would be experienced by this firm in the event of a crisis. Firms with a high percentage of capital shortfall in a crisis are not only the biggest losers in a crisis but also are the firms that create or extend the crisis. This SRISK% is the NYU Stern Systemic Risk Ranking of the US Financial sector.

As an illustration, applying these methods in July 2007, of the top 10 systemic firms, Citigroup, Merrill Lynch, Freddie Mac, Lehman Brothers, Fannie Mae and Bear Stearns all show up. By March 08, AIG, Bank of America and Wachovia enter into the top 10 rankings. Currently, the biggest contributor to risk by a wide margin is Bank of America and the top five riskiest firms account for over 70% of the risk.

As another illustration, we report below the top 10 systemically important financial institutions, as per SRISK%, using our analysis up to the week of 20 February 2011. Just five institutions are anticipated to contribute to up to 55% of the financial sector’s under-capitalisation in case of a market-wide crash, with Bank of America alone contributing 17.5%, not just because of its size but also due its high correlation with the market and relatively high leverage (contrast, say to JPMorgan Chase). Several nation-wide insurance firms show up as significant contributors as well. And, Citigroup and AIG still rank at number two and five, respectively, even though their immediate problems may have been resolved through government backstops. 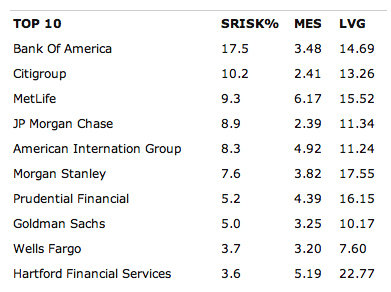 There is no doubt that relying only on publicly available data has issues. The financial crisis is the poster child for manipulation of leverage numbers. But these statistics can be supplemented with a more thorough micro analysis of each financial firm by regulators using confidential information and all the tools at their disposal. The Council cannot argue this is beyond their capabilities because, in fact, the US government already did this for 20 financial firms in 2009 when they conducted the highly regarded stress tests of these firms. These stress tests were completely analogous to the above measure of systemic risk, and to our statistical calculations mentioned above. Our statistics align well with the government’s stress tests (see Acharya 2010a).

The advantage of objective criteria based on traded market data is that it is very difficult for financial firms to manipulate these numbers. The statistical methods can provide estimates in real time. As a check, and also as a more careful update, periodic stress tests can be performed which provide alternative estimates of the exact same systemic risk measure. And the newly legislated Office of Financial Research can collect exclusive regulatory data on inter-connections of financial firms to augment such estimates. It is important that firms that want to avoid systemic prudential regulation have clear paths to follow. They can de-lever, de-merge, and decline the bets of the rest of the sector.

This is the easy part for the Financial Security Oversight Council. The tough part is to then design efficient regulation that discourages the build up of excessive risk.