Paul Krugman correctly anticipated that I would be unable to resist taking issue with him again regarding his view that the recent increase in commodities prices are warranted by the fundamentals.

Note that I am not saying in this post that “commodities prices have increased as a result of speculation.” That takes more granular analysis of conditions in various markets; we’ll be looking at some that look suspect in the coming days and weeks.

I intend to accomplish something much simpler in this post: to dispute the logic of Krugman’s overarching argument. He professes to be empirical, but as we will show, he is looking at dangerously incomplete data, so his conclusions rest on what comes close to a garbage in, garbage out analysis. And that’s been a source of frustration given his considerable reputation and reach.

Here is the guts of Krugman’s reasoning, from a recent post, “Signatures of Speculation“:

OK, how can speculation affect this picture? The answer is, it has to work through accumulation of inventories — physical inventories. If high futures prices induce increased storage, this reduces the quantity available to consumers, and it can raise the price. And you can, in fact, argue that something like this has been happening for cotton and copper, where there are apparently large and growing inventories.

I’m taking the liberty of putting in my redraw of an older version of his cartoon; I think it makes the point more clearly: 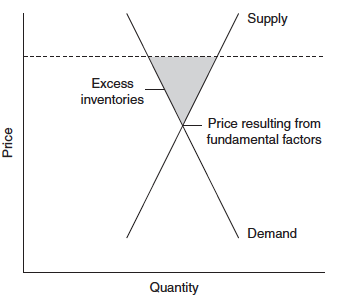 This is another statement of his argument in a 2008 post:

My problem with the speculative stories is that they all depend on something that holds production — or at least potential production — off the market. The key point is that the spot price equalizes the demand and supply of a commodity; speculation can drive up the futures price, but the spot price will only follow if the higher futures prices somehow reduces the quantity available for final consumers. The usual channel for this is an increase in inventories, as investors hoard the stuff in expectation of a higher price down the road. If this doesn’t happen — if the spot price doesn’t follow the futures price — then futures will presumably come down, as it turns out that buying futures produces losses.

So Krugman’s point is that if the price is higher than the level determined by supply and demand (the dashed line), you’ll see inventories, or more accurately, an increase over “normal” inventories, since the real world is not frictionless and there are various buffer stocks in the production system. And note he is NOT making a strong form claim that the speculators are the ones doing the hoarding (“usual channel” falls short of that); it’s merely that if the price is too high (say as a result of people in the cash markets somehow getting bad signals from all those evil speculators in the futures markets), the result will be opportunistic stockpiling.

That is not where our bone of contention with Krugman over oil in 2008 or our reservations now lie. It’s over statements like this:

But for food, it’s just not happening: stocks are low and falling.

This is simply not knowable, or at least not to the degree of confidence that Krugman has.

One thing I do on a regular basis is analyze information about market size and activity, and over time, it’s taken place in a very wide range of industries (yours truly specializes in oddball deals). Unless you are dealing with markets in which the government demands extensive reporting (like Japan, the data you can get in Japanese is just fantastic) or ones where you have a system of centralized reporting or other tight controls (like pharmaceuticals), it is very difficult even to get decent estimates of market size. So a basic issue is: understand the integrity of data.

Now consider commodities. Inventories can be held LOTS of places: storage facilities by private owners (major refiners such as flour mills), finished product, private speculators (there have been reports for years of base metal stockpiling in China), even the consumer level (during the oil crisis, people kept their auto gas tanks fuller due to the even-odd license plate gas station system). Consider what a monstrous supervisory apparatus around the world would be required to track all or even a substantial portion of where inventories in various commodities could be held.

The logical fallacy for Krugman is the official inventories he is looking at are only a subset of the places where inventory can be accumulated, and in many if not most cases a small enough subset that he cannot reach conclusions of the absence of inventory accumulation. For instance, in our long running discussion about oil prices in 2008, Krugman focused on official inventories. We pointed out that that storage was limited and actually surprisingly impractical. Those figures did not include the Strategic Petroleum Reserve (which was increasing its holdings during the 2008 price rise) nor did it consider that oil can simply be stored in the ground, via reducing well output. Our resident petroleum engineer Glenn Stehle explains:

Now let’s look at one of Krugman’s current concerns, which is food price increases. The blog Clouded Outlook (hat tip Ed Harrison) tells us how the food “inventory” data that Krugman is relying upon is woefully incomplete:

Since Krugman lives in New York, it is perhaps understandable that his knowledge of farming is a little limited. There is no such thing as data on inventory. The USDA produces a time series called grain stocks. This number is not the same as inventory. This stocks number has very limited coverage, focusing mainly on government holdings of grain. The USDA produces these estimates largely by looking at grain reserves in the US and reading reports produced by other governments.

Most countries run strategic grain reserves, and there is some limited data for what governments are holding. However, these reserves are disbursed across many sites across the world. Often there is wastage, theft, and miss-reporting. To put the issue in perspective; does anyone really think that the grain supply numbers coming out of say, Chad are accurate? Undoubtedly, the Chadian authorities are doing their best, but gathering comprehensive data on grain storage is not as easy as New York journalists might think.

In some parts of the world, grain markets are subject to government intervention, and price controls. This increases the incentives for corruption and misreporting. In more than one country, grain reserves have mysteriously disappeared, especially when food prices have suddenly accelerated. We should never forget there are some very powerful incentives at work here.

To make the point more forcefully, does anyone really think they know how much grain the private sector are holding? If private wholesalers are hoarding grain, I doubt very much that are reporting their stocks accurately to government officials. If prices are going through the roof, the incentives to hide grain are very potent.

Just to be clear, I am not saying we know nothing about grain stocks. I am sure the numbers coming out of the US, the EU and Canada are reliable. But strategic grain stock numbers from Russia, Kazakhstan and Ukraine? There I pause for a moment and wonder. Maybe, these numbers might be in the ballpark of the truth, but I would treat them with caution. As for private sector holdings of grain, only the Almighty knows that number.

There are estimates of production, which are partly taken from satellite imaging, and assumptions about yield per hectare. There is an obvious relationship between amounts produced last year and likely stocks this year. It is helpful, but I would feel uncomfortable about relying on those numbers.

Furthermore, when I hear that USDA estimates project a 5 percent decline in production, I am inclined to believe it. Nevertheless, reported harvests have been very good over the last few years. Even a five percent decline still puts the projected 2011 harvest up there in the top five years over the last two decades or so.

Nevertheless, these qualifications shouldn’t detract from the point that we shouldn’t take too seriously any argument suggesting that speculation in food markets is implausible, simply because there is a lack of inventory build-up. It is the sort of argument that city folk make. Country people know better.

The Australian blog MacroBusiness, in a recent post “Paul Krugman is Wrong,” reads the UN Food and Agriculture Office reports differently than Krugman does:

So, what about food prices. According to Krugman:

Not much evidence of hoarding, as far as I can tell. So this is straightforward supply and demand. Demand may be up to some extent because of that emerging-market boom. But if you look at the FAO reports it becomes clear that the key thing for cereals prices is that production is down in advanced countries, largely owing to terrible weather. And yes, it’s likely that climate change has played a role.

Well, this blogger read the FAO reports. And yes, one does show a small drop in wheat production. However, another also says the following (h/t threedogsandakid):

In its 2009 Trade and Development Report, the United Nations Conference on Trade and Development (UNCTAD) contends that the massive inﬂow of fund money has caused commodity futures markets to fail the “efﬁcient market” hypothesis, as the purchase and sale of commodity futures by swap dealers and index funds is entirely unrelated to market supply and demand fundamentals, but depends rather on the funds’ ability to attract subscribers….

The Groups recognize that unexpected price hikes and volatility are amongst major threats to food security and that their root causes need to be addressed, in particular:

a) The lack of reliable and up-to-date information on crop supply and demand and export availability;
b) Insufﬁcient market transparency at all levels including in relation to futures markets;
c) Growing linkage with outside markets, in particular the impact of “ﬁnancialization” on futures markets;
d) Unexpected changes triggered by national food security situations;
e) Panic buying and hoarding.

Now while there are markets where the inventory data may be more comprehensive (for instance, where the good are perishable, so the requirement for refrigeration and cold storage limit both distribution and inventory options), this pattern strongly suggests that at a minimum, relying primarily on inventory data is risky.

It therefore behooves analysts and commentators to look at market mechanisms and price movements relative to underlying changes in supply and demand before concluding that speculation isn’t playing a role in commodity price increases. Many of the people making these claims are not newbies; in fact, some are professionals with decades of experience, and most have nothing to gain by using the “s” word; in fact, they would damage their reputations if they cried wolf. That does not mean their opinions should be taken as a matter of faith, but it at least suggests that their arguments deserve a serious hearing.