New Zealand dolphin makes animal hero list Sydney Morning Herald (hat tip reader Crocodile Chuck). Moko was a favorite NC antidote, but hero? He didn’t put himself at risk….Has altruism become so rare that we are unable to distinguish it from heroism? Here is Time’s list so you can see the other stories.

Our Billion Dollar Turd Sandwich David Swanson. That billion dollars is just the down payment.

Manufacturing Alliance Chief: Obama Turning to ‘One of Country’s Leading Outsourcers’ in Immelt ABC. From two months ago, but contains an important factoid: the number of US factories GE has closed since Obama took office. Guess before you look.

In Debate Over Bank Capital Regulation, a Trans-Atlantic Gulf ProPublica. Good of them to wake up and take notice; perhaps it will help traction in the US a tiny bit. NC has been on this beat since early February.

NY Fed to AIG: thanks, but no FT Alphaville. The only theory that makes sense was AIG was trying to force a sale of ML II assets so it could get the equity and any gain, which it will now achieve.

Goodies and Baddies Adam Curtis, BBC (hat tip Mark Ames). Today’s must read/watch. On the origins and flawed premises of humanitarian interventions. And if you haven’t, you must see Curtis’ four part BBC series, The Century of the Self (via Google Video).

Just about this time of year, though several years ago, my wife and I stopped at a wonderful bed and breakfast on the Fraser River Delta, just south of Vancouver B.C. We borrowed one of their kayaks the next morning, and when we were headed upriver (those are the Cascade mountains in the background) a great blue heron took off from the river bank. I grabbed my camera and managed to snap this just in time. This magnificent bird truly captured the spirit of a perfect spring day. 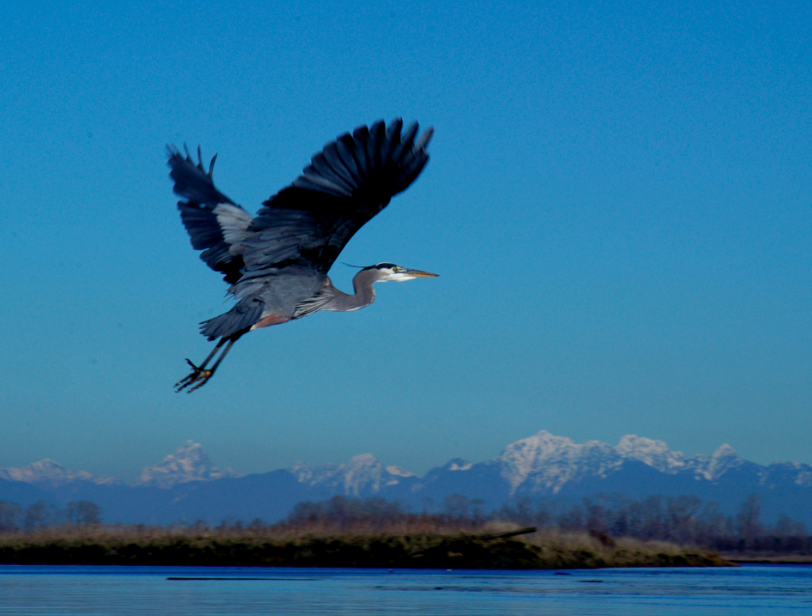