Yves here. I managed to miss this post last week, but since it did not get the notice it deserved, I thought I’d feature it.

One of the recent disturbing indicators of the triumph of the doomsday machine known as modern finance is Timothy Geithner’s vision that banks will continue to grow via increased penetration of emerging economies. From a recent interview by Noam Scheiber in The New Republic:

He told me he subscribes to the view that the world is on the cusp of a major “financial deepening”: As developing economies in the most populous countries mature, they will demand more and increasingly sophisticated financial services, the same way they demand cars for their growing middle classes and information technology for their corporations. If that’s true, then we should want U.S. banks positioned to compete abroad.

“I don’t have any enthusiasm for … trying to shrink the relative importance of the financial system in our economy as a test of reform, because we have to think about the fact that we operate in the broader world,” he said. “It’s the same thing for Microsoft or anything else. We want U.S. firms to benefit from that.” He continued: “Now financial firms are different because of the risk, but you can contain that through regulation.”

As anyone one with an operating brain cell realizes, “can contain” is not the same as “have contained” or “have a snowball’s chance in hell of containing”. Simon Johnson was also not happy with the Geithner vision of US financial firms occupying even bigger swathes of the world economy.

This post is important because it tackles a very basic question: when does the financial sector become so large as to be unproductive? And the answer is at levels of GDP that the US passed shortly after 1980.

Over the last three decades the US financial sector has grown six times faster than nominal GDP. This column argues that there comes a point when the financial sector has a negative effect on growth – that is, when credit to the private sector exceeds 110% of GDP. It shows that, of the advanced countries currently suffering in the fallout of the global crisis were all above this threshold.

The idea that a well-working financial system plays an essential role in promoting economic development dates back to Bagehot (1873) and Schumpeter (1911). Empirical evidence on the relationship between finance and growth is more recent.

Goldsmith (1969) was the first to show the presence of a positive correlation between the size of the financial system and long-run economic growth. He argued that this positive relationship was driven by financial intermediation improving the efficiency rather than the volume of investment. However, Goldsmith made no attempt to establish whether there was a causal link going from financial development to economic growth. Several economists remained thus of the view that a large financial system is simply a by-product of the overall process of economic development. This position is well represented by Joan Robinson’s (1952) claim that “where enterprise leads, finance follows.”

In the early 1990s, economists started working towards identifying a causal link going from finance to growth. King and Levine (1993) were the first to show that financial development is a predictor of economic growth. More evidence in this direction came from Beck et al. (2000) who used different types of instruments and econometric techniques to identify the presence of a causal relationship going from finance to growth. Finally, Rajan and Zingales (1998) provided additional evidence for a causal link going from financial to economic development by showing that industrial sectors that for technological reasons are more dependent on finance grow relatively more in countries with a larger financial sector. There is by now an enormous literature showing that finance does indeed play a positive role in promoting economic development and few economists now doubt the existence of such a causal link (Levine 2005).

The recent crisis has however raised concerns that some countries may have financial systems that are “too large” compared to the size of the domestic economy. Wolf (2009), for instance, noted that over the last three decades the US financial sector grew six times faster than nominal GDP and argued that there is something wrong with a situation in which, “instead of being a servant, finance had become the economy’s master”. For his part, Rodrik (2008) asked whether there is evidence that financial innovation has made our lives measurably and unambiguously better.

The idea that there could be a threshold above which financial development hits negative social returns is hardly new. Minsky (1974) and Kindleberger (1978) emphasised the relationship between finance and macroeconomic volatility and wrote extensively about financial instability and financial manias. More recently, in a paper that seemed controversial at the time, and looks prophetic now, Rajan (2005) discussed the dangers of financial development suggesting that the presence of a large and complicated financial system had increased the probability of a “catastrophic meltdown”. In an even more recent paper, Gennaioli et al. (2010) show that, in the presence of some neglected tail risk, financial innovation can increase financial fragility, even in the absence of leverage.

In a new paper (Arcand et al. 2011), we contribute to the literature on financial development and economic growth in three distinct ways.

First, we build a simple model finding that, even in the presence of credit rationing, the expectation of a bailout may lead to a financial sector that is too large with respect to the social optimum.

Second, we use different datasets (both at the country and industry-level) and empirical approaches (including semi-parametric estimations) to show that there can indeed be “too much” finance.

Our results show that the marginal effect of financial development on output growth becomes negative when credit to the private sector surpasses 110% of GDP. This result is surprisingly consistent across different types of estimators (simple regressions and semi-parametric estimations) and data (country-level and industry-level). The threshold at which we find that financial development starts having a negative effect on growth is similar to the threshold at which Easterly et al. 2000 find that financial development starts increasing volatility. This finding is consistent with the literature on the relationship between volatility and growth (Ramey and Ramey 1995) and that on the persistence of negative output shocks (Cerra and Saxena 2008).
Third, we discuss how our results relate to the current crisis and show that all the advanced economies that are now facing serious problems are located above our “too much” finance threshold.

We also run a battery of tests showing that the size of the financial sector played an important role in amplifying the effects of the global recession that followed the collapse of Lehman Brothers in September 2008. While most of the recent discussion on the negative effects of financial development concentrates on the advanced economies, we show that during the recent crisis the amplifying role of the financial sector was also important for developing countries.

We believe that our results have potentially important implications for financial regulation. The financial industry has argued that the Basel III capital requirements will have a negative effect on bank profits and lead to a contraction of lending with large negative consequences on future GDP growth (Institute for International Finance 2010). While it is far from certain that higher capital ratios will reduce profitability (Admati et al. 2010), our analysis suggests that there are several countries for which tighter credit standards would actually be desirable.

Yves again. In case you were curious, here are the US and Australian private debt to GDP ratios, courtesy Steve Keen: 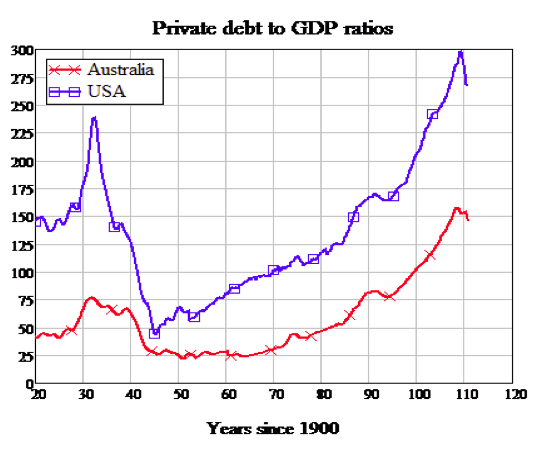