It has been widely argued that natural-resource wealth is a curse that leads to corrupt politicians, closed and illiberal societies, and defunct economies. This column presents new evidence on the political impacts of oil wealth. It argues that the effects depend on geology and history, shedding light on the recent uprisings in the Middle East and North Africa.

Can the recent protests across the Middle East and North Africa help spread democracy in the region? Many respond to this question by pointing out that a lot of these countries have substantial oil wealth and that natural resources are often a curse. For example, oil wealth is said to make bad authoritarian regimes more durable because it enables dictators to become stronger by funding patronage. But how do we reconcile the coexistence of some oil-rich non-democratic regimes, such as Saudi Arabia’s royal family, and some of the most democratic countries, like Norway, where the Norwegian Oil Fund is used to fuel the economy?

Research in economics and political science has found that democracy’s advances are limited in oil-exporting countries (Barro 1999, Ross 2001). In a recent paper (Tsui 2011), I use detailed industrial data on the history of worldwide oil discoveries to provide new evidence for the long-term effect of oil wealth on democracy. While oil exploration and extraction activities extend over time, my data suggest that a country’s major discoveries are usually concentrated in a few years, known as the peak discovery period. For example, while many oil-rich Middle East countries have a peak discovery prior to 1950, Norway’s peak discovery year is 1979. Figure 1 shows the long-term change in democracy in countries before and after their peak discovery. While for democracies oil discovery essentially has no effect, in non-democracies democracy scores for oil and non-oil countries have been diverging since the peak discovery year.

Figure 1. Democracy before and after peak discovery year 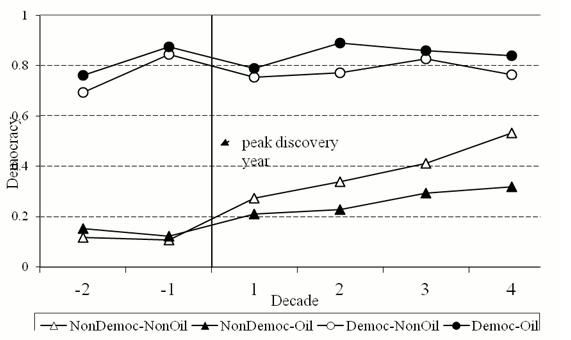 Controlling for other factors, I estimate that on average, when non-democratic countries discover 100 billion barrels of oil (approximately the oil endowment of Iraq), it pushes their democracy score about 15 percentage points below trend three decades later. As a point of reference, Bahrain is about 15 percentage points more democratic than Saudi Arabia. So the estimated effect appears to be modest. But taking account of geological factors – such as oil quality, oil-field depth, and other indicators of the costs of extraction – the negative effect of oil on democracy almost doubles. A difference of 30 percentage points in democracy is approximately the difference between Jordan and Saudi Arabia. Moreover, the negative effect of oil is larger the higher the oil quality and the lower the exploration and extraction costs. Norway is a relatively high-cost oil-producing country because of the technological challenge involved in extracting North Sea oil.
Another major finding of this research is that oil discovery has essentially no political impact in democratic countries. Norway has been a democratic country since the beginning of the twentieth century. More than 70 years of democratic experience made Norway a consolidated democracy when oil was discovered in the 1970s – and Norway has not become less democratic since then.

Indeed it is often cited as one of the most robust democracies in the world.
Before the 1950s, Egypt was one of the most democratic countries in the Middle East and North Africa region. Its limited oil discoveries peaked in 1965 and oil production in Egypt has been declining since the mid-1990s. Tunisia has a similar oil history. The findings of my research suggest that the relatively peaceful political transitions in these two countries recently may not be coincidences.

Oil wealth can be a political curse when oil-rich dictators oppose democratic development because they will have more to give up from losing power. However, my study highlights the importance of the possibility of heterogeneous effects when evaluating the social impact of resource wealth. In joint work with Anca Cotet, we find that oil-rich non-democratic countries do not experience more civil war on average. Rather, oil-rich non-democratic countries have significantly higher military expenditures (Cotet and Tsui 2011). In research with Casey Mulligan, we argue that lucrative oil reserves provide strong incentives for greedy dictators to remain in power – and they use fear to deter their greedy political opponents (Mulligan and Tsui 2008, Tsui 2010). In contrast with Egypt and Tunisia, Libya has the largest oil reserves in Africa. Our results shed light on the behavior of oil-rich dictators such as Colonel Gaddafi, as well as internet censorship and control in other oil-rich states such as and Saudi Arabia and the United Arab Emirates.