Wow, this is what debt slavery looks like on a national level.

The Financial Times reports that a new austerity package is about to be foisted on Greece. It amounts to asset stripping and a serious curtailment of national sovereignity:

European leaders are negotiating a deal that would lead to unprecedented outside intervention in the Greek economy, including international involvement in tax collection and privatisation of state assets, in exchange for new bail-out loans for Athens….pressure is building to have a deal done within three weeks because of an IMF threat to withhold its portion of June’s €12bn bail-out payment unless Athens can show it can meet all its financing requirements for the next 12 months.

Officials think Greece will be unable to return to the financial markets to raise money on its own in March – as originally planned in the current €110bn package – meaning that the IMF is now forbidden from distributing any additional cash. Without the IMF funds, eurozone governments would either be forced to fill the gap or Athens could default.

To bring the IMF back in, the new deal must be reached by a scheduled meeting of EU finance ministers on June 20.

Even if they get their way, the rescue package is certain to fail to forestall an eventual default or restructuring because none of these rescues is a rescue. When the banks got in financial trouble, they got to borrow at discount rates. If Greece were to borrow from the ECB, say at 2% over the EBC’s policy rate, instead of the punitive rates on offer, it would look a hell of a lot more viable near term. I’m not saying that this is the best or only remedy, but the ECB is also blocking a restructuring, specifically, anything that would be deemed to be a credit event. Clearly the concern is not Greek CDS; John Dizard has pointed otu that the level of Greek CDS is miniscule, less than 2% of the outstanding debt, so what happens to the CDS writers is simply noise compared to what happens to the bonds themselves. The concern seems to be setting a precedent, that the ECB seems desperate to maintain the fiction that no eurozone sovereign will default or restructure (and these are hardly the only options; a voluntary restructuring would get the job done).

Another reason this rescue is not a rescue is that one of its major elements, that of stripping Greece of assets, is unlikely to raise the €50 billion expected. The demands here are astonishing. Greek premier George Papandreou agreed to only €5 billion of asset sales a year ago; the best state owned assets are expected to fetch at best €15 billion. Trust me, if that’s all you can get from the best properties, anything else that can be cobbled together is likely to be worth at most half that in toto. So it’s not hard to foresee that the receipts from the infrastructure sales are likely to fall short by about half.

And the notion that the invading banker hoards are going to “supervise” tax collection is sure to mean that they will make certain that they are first in getting tax receipts. As various readers have pointed out, lower middle and middle class Greeks have taxes withheld from wages; it’s the rich and the participants in the black economy that escape. It is far fetched to think that foreign involvement will improve matters; indeed, I’d expect everyone who can to operate out of the black economy as an act of rebellion.

Greece looks to be on its way to be under the boot of bankers just as formerly free small Southern farmers were turned into “debtcroppers” after the US Civil War. Deflationary policies had left many with mortgage payments that were increasingly difficult to service. Many fell into “crop lien” peonage. Farmers were cash starved and pledged their crops to merchants who then acted in an abusive parental role, being given lists of goods needed to operate the farm and maintain the farmer’s family and doling out as they saw fit. The merchants not only applied interest to the loans, but further sold the goods to farmers at 30% or higher markups over cash prices. The system was operated, by design, so that the farmer’s crop would never pay him out of his debts (the merchant as the contracted buyer could pay whatever he felt like for the crop; the farmer could not market it to third parties). This debt servitude eventually led to rebellion in the form of the populist movement.

The Greeks appear to have a keen appreciation of what is in store for them. Protests have been underway in Athens, and the locals seem to think they could eventually produce bloodshed. We received an e-mail forwarded from a source claiming to be in Athens; the inclusion of Greek-language charts suggests it is genuine. Note that it says that “parts of the national capitalist class” are taking the idea of leaving the Eurozone seriously. But reading between the lines, the writer of the e-mail appears to see that as a local looting scheme, as opposed to one to benefit foreign bankers. Ugh.

This is the fifth day and the crowd is increasing in Syntagma square in Athens. There must have been more than 30.000 people this evening and there are still there more than 10.000 at 11.30 pm (today). As a genuine gathering of the multitude there are not prevailing slogans apart from “thefts” and “take a helicopter and leave this place” (it refers to what has happened in Argentina). Flags of Argentina can be also seen among the demonstrators. In the front a banner says in Spanish “we are desperate, we woke-up. What time is it? Its time for them to leave”. People are dancing shouting or just hanging around talking to each other. A “general assembly” is held at late hours in the square, where people can take the microphone, speak and say what they think freely. It’s not stopping and it will not stop although I think that maybe there will be less people the forthcoming days.

Maybe you are not aware on the details of the Greek time lines. There are enough money for the government until the 14 July and they desperately need the next dose of the IMF and the EU to keep the country running. EU governments are blackmailing, asking for a national consensus of at least the governing socialist party and the conservative right party, but the conservatives do not accept. They are asking for a huge privatization plan which practically spans all public enterprises including water companies and land. The latter is something quite difficult to be accepted by the public opinion.

The idea that prevails is that after selling all these crucial resources nothing will really change for the people and most possibly we will be in the same position of bankruptcy after a year or maybe two having lost by this time most of public resources. Also a huge tax collection plan is under finalization which according to leakages it will cost 3.000-4000 euros annually for a family with 4 persons . This means that a lot of marginally surviving people will fell below the elementary standard of living. Another 150.000 unemployed are expected for the forthcoming year. Final decisions will be announced most probably at 6th of June – so keep this date in mind. It might be the beginning of real bloody demonstrations.

What are the political implications of this mass mobilization and which are the probable effects? Although is difficult to say I am thinking that most probably if this dynamic goes on it might be impossible for the government to vote for the new measures. At this stage political instability with these time lines means bankruptcy.

Another interesting story is that parts of the national capitalist class are seriously thinking of bankrupting the country and take over with a new drachma. This is not discussed politically openly because a return to a national currency will be extremely painful for the masses. In fact the story of Argentina is well known. My impression of the overall situation is that for several reasons Greece follows the road to an open bankruptcy with several people waiting to benefit from that and nobody taking the political risk to support it. Since European governments are deeply divided on the Greek crisis, it is difficult to believe that they will act in a coordinated, quick and generous way to avoid the storm, although this cannot be ruled out.

Now, some figures from the public opinion 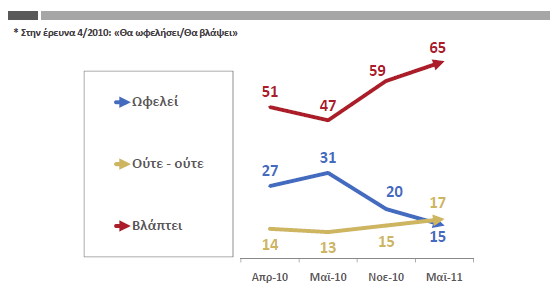 The most important slide which shows the bankruptcy of the ruling system in Greece is the following. Please pay attention… 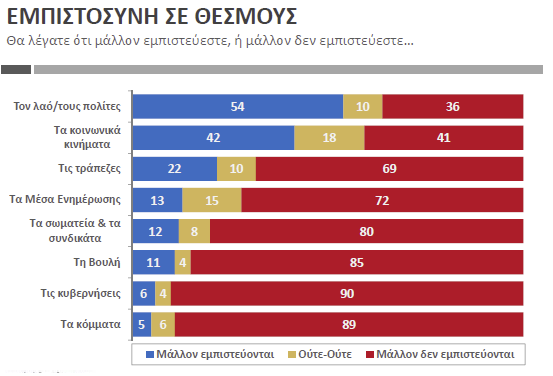 Does this explain to you what happens now at Syntagma square?