Yves here. This post is certain to annoy some readers. Note that Kelton does not address under what circumstances it is desirable to have the government run a surplus versus a deficit, merely what the implications are. Bill MItchell is rather forceful on this matter:

The US press was awash with claims over the weekend that the US was “living beyond” its “means” and that “will not be viable for a whole lot longer”. One senior US central banker claimed that the way to resolve the sluggish growth was to increase interest rates to ensure people would save. Funny, the same person also wants fiscal policy to contract. Another fiscal contraction expansion zealot. Pity it only kills growth. Another commentator – chose, lazily – to be the mouthpiece for the conservative lobby and wrote a book review that focused on the scary and exploding public debt levels. Apparently, this public debt tells us that the US is living beyond its means. Well, when I look at the data I see around 16 per cent of available labour idle in the US and capacity utilisation rates that are still very low. That tells me that there is a lot of “means” available to be called into production to generate incomes and prosperity. A national government doesn’t really have any “means”. It needs to spend to get hold off the means (production resources). Given the idle labour and low capacity utilisation rates the government in the US is clearly not spending enough. The US is currently living well below its means. But the US government can always buy any “means” that are available for sale in US dollars and if there is insufficient demand for these resources emanating from the non-government sector then the US government can bring those idle “means” into productive use any time it chooses.

Spending equals income. Someone has to spend for incomes to exist. For incomes to grow there has to be growth in spending. There are three sources of spending growth in a macroeconomy – the external sector (if net exports are positive); the private domestic sector; and the government sector (if the budget is in deficit).

That is indisputable. Economic growth is defined in terms of production and production only occurs if there are goods and services being purchased. Firms do not produce to hold inventory. Firms may invest in response to their guesses about future sales. These guesses will be heavily influenced by current consumer actions.

So when you get commentators and high-level monetary officials arguing that growth comes from not spending you have to ask why anyone would listen to their views and why they are paid to express them. I don’t mind bloggers who do it for free saying what they like but when highly-paid and highly-visible express views that are not grounded in any economic theory that is comprehensible but nonetheless seek to influence the policy debate then I get angry.

One problem in the US is that these decisions are politicized due to a lack of consensus on national priorities and an unwillingness to admit that we need a significant change in economic policy. Even though the evidence is all around us that the economic paradigm of the last 30 years, of using rising consumer debt to substitute for rising worker wage levels, is tapped out, those at the top of the economic heap still benefit from reimplementing it even if it isn’t very successful and looks likely to end in tears very soon. As we wrote in ECONNED:

The situation we are in now echoes that of the Great Depression. Although scholars still debate its causes eighty years later, a persuasive view comes from MIT economics professor Peter Temin. Temin, in his Lessons from the Great Depression, first sets forth the prevailing explanations and explains why each falls short. He argues that the culprit was the impact of World War I on the gold standard.

Recall that starting roughly in the 1870s, major European economies increasingly adopted the gold standard, and a long period of prosperity resulted. The regime was suspended in the UK and the major European powers during the war. Afterward, they moved to restore it, sometimes at considerable cost (England, for instance, suffered a nasty downturn in the early 1920s). But the aftereffects of the war meant the Edwardian period framework was unworkable. The deflationary forces they set in motion could have been countered by countercyclical measures after the Great Crash. But that was impossible with the gold standard. Indeed, as Temin notes, “Holding the industrial economies to the goldstandard last was about the worst thing that could have been done.”

Now readers may have trouble with that comparison, particularly since the conventional wisdom is that our policy responses have been so much better than those of the early 1930s. But the key point here is that the institutional framework locked the major actors into a particular set of responses. They were not able to see other paths out because they conflicted with an architecture and a set of beliefs that had comported themselves well for a very long time. It’s hard to think outside a system you grew up with. And remember, the gold standard did not break down overnight; the process took more than a decade.

By Stephanie Kelton, Associate Professor of Economics at the University of Missouri-Kansas City, Research Scholar at The Levy Economics Institute and Director of Graduate Student Research at the Center for Full Employment and Price Stability. Cross posted from New Economics Perspectives.

The laws of accounting allow us to demonstrate that similarly powerful concepts apply to the science of economics. Beginning with the simple identity for GDP in a closed economy, we have:

For economists, this is as obvious as stating that a linear foot is the sum of 12 sequential inches. It simply recognizes that the total amount of money spent buying newly produced goods and services will yield an equivalent income to the sellers of these products. Thus, it demonstrates that expenditures are a source of income.

Once earned, income can be allocated in one of three ways. At the end of the day, all income (Y) will be spent (C), saved (S) or used in payment of taxes (T):

Since they are equivalent expressions for Y, we can set equation [1] equal to equation [2], giving us:

Or, after canceling (C) from both sides and moving terms around:

In the above scenario, the government is balancing its receipts (T) and expenditures (G), and you are balancing your savings and investment spending. There is no net gain/loss.

This should make intuitive as well as mathematical sense, because when Uncle Sam runs a deficit, you receive more financial assets than you lose through taxation. Put simply, Uncle Sam’s deficit lifts you into a surplus position. Moreover, bigger deficits mean bigger surpluses for you.

Finally, let’s see what happens when Uncle Sam tightens his belt. Suppose, for example, that we were able to duplicate the much-coveted surpluses of 1999-2001. What would (and did!) happen to the private sector’s financial position? 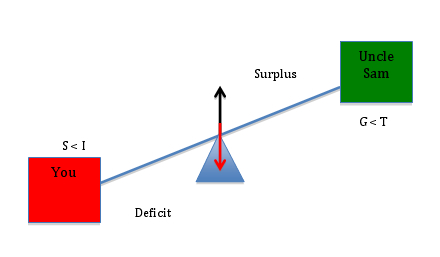 Because the economy’s financial flows are a closed system – every payment must come from somewhere and end up somewhere – one sector’s surplus is always the other sector’s deficit. As the government “tightens” its belt, it “lightens” its load on the teeter-totter, shifting the relative burden onto you.

This is not rocket science, but it appears to befuddle scores of educated people, including President Obama, who said, “small businesses and families are tightening their belts. Their government should, too.” This kind of rhetoric may temporarily boost his approval ratings, but the policy itself will undermine the efforts of the very families and small businesses that are trying to improve their financial positions.

* I’ll be back with a second installment that shows what happens when we ‘open’ the economy to take into account the foreign sector (and the relevant financial flows). Many of us have been working with financial balance equations for years (see here for references), so the current effort is nothing new. I am merely trying to make the arguments more accessible by changing the way they are presented.