One of the interesting features of the seemingly unending Eurozone crisis is that the half life of rescue measures is decreasing.

The elephant in the room, which we will put aside to focus on the current state of play, is that everyone knows the Greek debts must be restructured. To have Greece pay out punitive rates on past debt will simply grind the economy into a deeper hole, worsening its debt to GDP ratio and eroding its physical and human infrastructure. All the delay of the inevitable does is allow for more extend and pretend while Western financial firms strip the economy for fun and profit. And this is terribly inefficient looting; their profits from this pilferage will be small relative to the pain inflicted on the Greek populace.

Late last week, various commentators made a bit too much of the clearing of one obstacle to the extension of yet another short lifeline to Greece, namely, that Angel Merkel had relaxed one of conditions that stood in the way of a planned €12 billion credit extension. She had wanted private creditors to share in the pain, and agreed that a rollover of currently maturing debt would do. Before she had insisted on a full bond exchange, which would have resulted in a much more significant hit to investors.

This concession did not go over well in Germany. Per the Financial Times:

“What has been agreed is not a real participation of [private] creditors,” said Frank Schäffler, a rebel leader in the Bundestag from the ranks of the Free Democratic party, the liberal junior partner in Ms Merkel’s coalition. “It does not correspond to what the German Bundestag has agreed,” he told the Frankfurter Allgemeine newspaper on Sunday.

Klaus-Dieter Willsch, another dissident backbencher in Ms Merkel’s own Christian Democratic Union, warned that “it will be difficult [for her] to win a majority in parliament” for a new Greek rescue on the basis of a bond rollover.

Even the opposition Social Democrats, who are in principle more positive about a new Greek rescue, are threatening to withhold their votes in the Bundestag if Ms Merkel cannot deliver a majority from the ranks of her supporters.

Even though Germany has been the heavy thus far, it is France that is actually the most exposed to Greece, when you include private debt, as this chart from the BBC shows (hat tip Daniel Pennell): 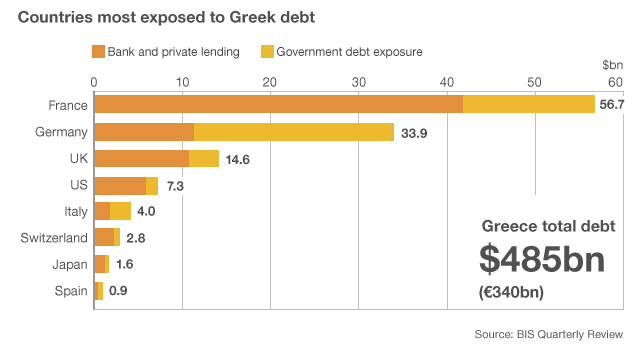 The update this morning from meetings over the weekend among Eurozone ministers is fragmentary and confused (the disparity among various reports on the same story is unusually wide) but the bottom line is clear. First, a deal has not been agreed to although they insist there will be a deal before Greece really needs the dough. Second, the eurozone ministers insist that the Greek parliament nevertheless pass tough austerity measures as a precondition for any rescue.

The BBC, which was more coherent than some other accounts, depicts the action as a “delay”:

Eurozone finance ministers have postponed their decision on a 12bn euro ($17bn; £10bn) loan to Greece until it introduces further austerity measures.

The ministers said they expected to pay the latest tranche of a 110bn euro EU and IMF aid package by mid-July.

But it will depend on the Greek parliament passing 28bn euros of new spending cuts and economic reforms.

The ministers also committed to put together a second bail-out package to keep the country afloat.

It isn’t lost on anyone that “expected to pay” isn’t a resounding commitment. The Financial Times more pointedly called it “A failure by eurozone governments over the weekend to agree the release of a €12bn bail-out payment for Greece.” Bloomberg pointed to another obvious concern, whether the full €12 billion would be forthcoming even if the Greeks knuckled under.

Recall also that this €12 billion isn’t a new deal; it’s another tranche in the €110 billion package agreed (well, supposedly agreed) for Greece last year. And the Greek government does have the upper hand here; it is ironically the same leverage point the US banks used to push through the heinous TARP in 2008: “If you don’t rescue us, all hell breaks loose.” But it has been cowed into not making that threat. As Mark Weisbrot wrote in the Guardian last Friday:

Imagine that in its worst year of our recent recession, the United States government had decided to reduce its federal budget deficit by more than $800bn – cutting spending and raising taxes to meet this goal. Imagine that, as a result of these measures, the economy had worsened and unemployment soared to more than 16%; and then the president pledged another $400bn in spending cuts and tax increases this year. What do you think would be the public reaction?

It would probably be similar to what we are seeing in Greece today, including mass demonstrations and riots – because that is what the Greek government has done….What makes the Greek public even angrier is that their collective punishment is being meted out by foreign powers – the European Commission, the European Central Bank and the IMF. This highlights perhaps the biggest problem of unaccountable, rightwing, supranational institutions….If it had leaders of its own who were stupid enough to massively cut spending and raise taxes during a recession, those government officials would be replaced….

And if that required a renegotiation of the public debt, that is what the country would do. This is going to happen even under the European authorities, but first, they are putting the country through years of unnecessary suffering. And they are taking advantage of the situation to privatise public assets at fire sale prices and restructure the Greek state and economy, so that it is more to their liking…

The IMF is going to hand over the money anyway…the prospect of a disorderly default… is too scary for the European authorities to contemplate. For this reason, the many news articles about the possibility of a financial collapse comparable to what happened after Lehman Brothers went under in 2008 are somewhat exaggerated. The European authorities are not going to let that happen over a measly $17bn loan installment.

There appears to be three ways that the Greek conditional deal gets upended. The first two are that the austerity plan, which is tantamount to stripping the country of assets, is repudiated by Parliament or in the streets. The third is a bank run (which is already underway and could accelerate if the public pushback is severe enough).

It isn’t clear that the austerity plan will be approved by the Greek legislators. Weisbrot claimed polls showed opposition at 80%: the more widely cited polling results in the Western media is a mere 47% (note that poll showed only 35% in favor of the deal). Given how poorly the economy has performed and how the deal amounts to an end of Greek sovereignity, it isn’t hard to imagine that opposition is over 50%, particularly since reports over the last month indicate that even Greek businessmen are against it.

The key Parliamentary decisions are a vote of confidence on Tuesday, which Papandreou is expected to survive, and a vote on the austerity package next week. A report last week by the BBC’s Paul Mason (which I urge you to read in full) gives a sense of both how deep the discord is in Greece and how the European elites are misreading it. He contends that they are mistaking the protests as typical leftie opposition that can be ignored, when the citizens are withdrawing their consent to be ruled:

There is a social crisis under way and I think it is different from the one our history books teach us to expect. It’s not like the cracking of the state, or mass unrest, but simply that the Greek state – whose reach was never far into society – is beginning to lose its grip slightly on the actual functions a state should do.

It cannot decide its economic policy; it can’t convince its own people of any good intent; the rule of law is imposed hard here – with the impounding of yachts bought through tax evasion – only to break down somewhere else, as people begin to pledge non-payment of bills for the privatised utilities… the violence is a sideshow: it is the political paralysis of the Greek government that is of world importance because – while the European Union bickers about how much bankers should lose versus how much the EU should lose as Greece defaults – you are seeing the lines of defence against financial and social chaos within this part of Europe getting very frayed…

I think the level of mismatch between perception and reality within the Eurozone is worrying. Because last year’s protests were mainly leftist; and the strikes mainly token, a pattern of thinking has emerged that dismisses all Greek protest as essentially this.

But a new situation is emerging: Greek people I have spoken to are beginning to express things in terms of nation and sovereignty – and this makes the Greek situation different, for now, to Ireland and Portugal.

While the centre right New Democracy would probably win any snap election, it is hard to find support for pro-austerity politics among ND’s natural support base, the business class. Because austerity for them means getting hammered with a tax bill the like of which they have never dreamed, nor indeed paid.

And I will repeat the point about hostility to the media…The “mainstream” – whether it’s the media, politicians or business people – is beginning to seem illegitimate to large numbers of people.

He was quite calm and rational as he waved his hand in my face: “It’s too late for that.”

Gavin Hewitt, the BBC’s Europe editor, echos the same theme this morning: the real risk is not from the not well focused protests, but the simmering resentment among broad swathes of the public.

The ever pragmatic John Dizard thinks the public be damned, the real hazard is a bank run:

Again, don’t pay too much attention to the striking civil servants. They aren’t going to destroy the country. The issue is the avoidance of deposit runs, and widespread decapitalisation of the Greek financial system. These could quickly overwhelm any reasonable commitments of multilateral support.

Among the problems with the buy-time kick-the-can approach to restructuring of troubled European sovereign debt is that it creates a succession of critical dates before which panic can build. After a while, the depositing public gets educated to the advantages of withdrawing pre-restriction, or pre-devaluation, currency.

The tacit assumption underlying the eurozone push for the Greek government to put its neck in the noose before any commitments are made is that the markets will go along with this gamesmanship (or to be more precise, any adverse reaction will be short term in nature). So far, they’ve won this game of Russian roulette. But with everyone with an operating brain cell understanding that a Greek restructuring is inevitable, the point will come when kicking the can down the road is no longer credible. And that juncture is likely to come before the eurozone officialdom is prepared to make tough decisions and force losses on to bondholders and banks.