If more women were elected, would political sex scandals disappear? Syracuse (hat tip reader bob). I’m not big on this sort of article, but I liked the straightforward thesis (which does not depend on the annoying assumption of greater virtue among women): powerful women don’t attract interest from the opposite sex they way powerful men do.

Please respect FT.com’s ts&cs and copyright policy which allow you to: share links; copy content for personal use; & redistribute limited extracts. Email ftsales.support@ft.com to buy additional rights or use this link to reference the article –

Al Jazeera at Home on a Former PBS Outlet New York Times. If this keeps up, the right may come to regret its defunding of PBS.

How to End the War on Terror Karen Greenberg, TomDispatch

The Regulator Down the Hall Wall Street Journal

The cat mother, Tito. The kitten, Paco. And the baby squirrel, Firulais. They became family last year, when Rubén Darío Gaviria, who lives in Colombia, found the squirrel under a tree, limping and unable to climb up. The squirrel instinctively cuddled with him, hiding from the cold weather, at 6 a.m.

As Rubén got home, he introduced the little squirrel to mom Tito, who was not so pleased to see the newcomer. A quick reprimand of “Bad Tito! He’s family now,” followed. The mom got the message and immediately welcomed the squirrel into her bed with Paco, the baby kitten. The squirrel, then named Firulais, bonded with his new mother when she started nursing him back to health.

The unusual family plays together daily. At night, Firulais ventures into the woods, where he dug a hole. He’s free to go whenever he wants, says Rubén, but he doesn’t seem to be very interested in giving up the comforts of his new home. He always comes back to sleep all curled up with Tito and Paco. 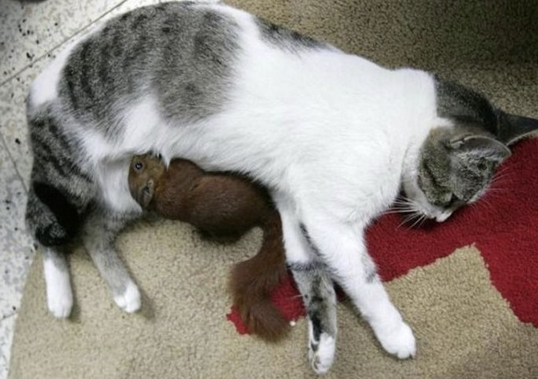 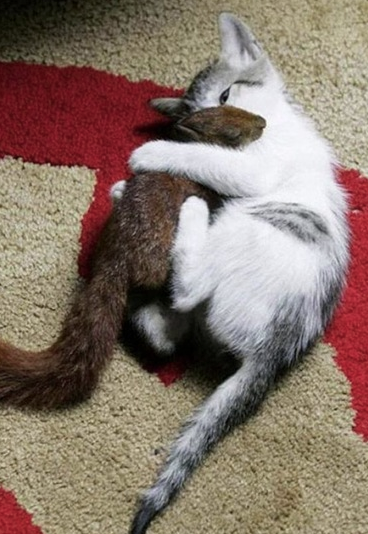