You know that Fukushima reactors 1, 2 and 3 all melted down within hours of the Japanese earthquake.

You also know that at least some of the subsequent explosions could have been caused by small-scale nuclear reactions called “prompt moderated criticalities”.

But you might not know that nuclear reactions may still be ongoing.

Specifically, it is well-known by nuclear scientists that the ratio of iodine 131 to cesium 137 tells a lot about when nuclear reactions have stopped. For example, on May 2nd, University of Tokyo physics professor Tetsuo Matsui published a scientific paper with the following summary:

We calculate the relative abundance of the radioactive isotopes Iodine-131 and Cesium-137 produced by nuclear fission in reactors and compare it with data taken at the troubled Fukushima Dai-ichi nuclear power plant. The ratio of radioactivities of these two isotopes can be used to obtain information about when the nuclear reactions terminated.

When a reactor switches off, the iodine decays more quickly so the ratio between these two isotopes changes rapidly over a period of days. That’s why measuring this ratio is a good way to work out when the nuclear reactions terminated.

There are some complicating factors, however. The most important of these is that the ratio of iodine-131 and cesium-137 to start with depends on how long the reactor has been operating and so is not constant.

Today, Tetsuo Matsui at the University of Tokyo, says the limited data from Fukushima indicates that nuclear chain reactions must have reignited at Fuksuhima up to 12 days after the accident.

Matsui says the evidence comes from measurements of the ratio of cesium-137 and iodine-131 at several points around the facility and in the seawater nearby. He has calculated what the starting ratio must have been by assuming the reactors had been operating for between 7 and 12 months.

The data from the drain near reactor 2 and from the cooling pond at reactor 4, where spent fuel rods are stored, indicate that the reactions must have been burning much later.

“The data of the water samples from the unit-4 cooling pool and from the sub-drain near the unit-2 reactor show anomaly which may indicate, if they are correct, that some of these ﬁssion products were produced by chain nuclear reactions reignited after the earthquake,” he says.

These chain reactions must have occurred a significant time after the accident. “It would be diﬃcult to understand the observed anomaly near the unit-2 reactor without assuming that a signiﬁcant amount of ﬁssion products were produced at least 10 – 15 days after X-day,” says Matsui.

So things in reactor 2 must have been extremely dangerous right up to the end of March.

The IAEA has said that the Fukushima nuclear power plant may have achieved re-criticality. “There is no final assessment,” IAEA nuclear safety director Denis Flory said at a press conference on Wednesday, according to Bloomberg News. “This may happen locally and possibly increase the releases.”

Unit 3 may not have melted through and that means that some of the fuel certainly is lying on the bottom, but it may not have melted through and some of the fuel may still look like fuel, although it is certainly brittle. And it’s possible that when the fuel is in that configuration that you can get a re-criticality. It’s also possible in any of the fuel pools, one, two, three, and four pools, that you could get a criticality, as well. So there’s been frequent enough high iodine indications to lead me to believe that either one of the four fuel pools or the Unit 3 reactor is in fact, every once in a while starting itself up and then it gets to a point where it gets so hot that it shuts itself down and it kind of cycles.

Radiation levels in water inside the silt fence near reactor 2 are high and rising, despite large amounts of dilution. Continued very high levels of Iodine 131 with a half life of 8 days are very hard to explain for a reactor that has been “shut down”. Normally Iodine levels would drop several orders of magnitude below cesium activity levels over the sixty day period shown in the graph, but instead they continue to track each other. The level of 10,000 Bq/liter I-131 is very problematic. It is much higher than would be expected for a reactor in cold shut down for 2 1/2 months. 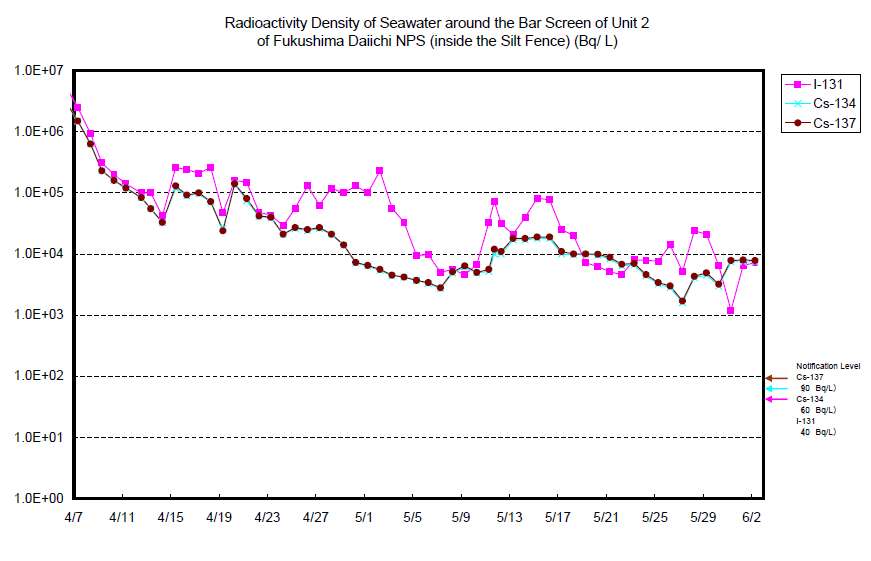