While a tornado partially knocked out at the Browns Ferry reactors in Alabama in April, power began to be restored within a month without incident.

The flood waters in the Missouri continue to pose a danger to the Fort Calhoun nuclear plant in Nebraska. As you may know, an electrical fire at the spent fuel pools at Fort Calhoun temporarily knocked out power for cooling, and the operator flooded the containment building.

So far, I have seen no evidence of any release of radiation, although there are a number of worrying factors in the form of a “perfect storm” which could – in a worst-case scenario – lead to an accident.

The latest updates include:

The State of Vermont has denied relicensing to the Vermont Yankee Nuclear power plant.

But Senator Sanders says that 100% captured Nuclear Regulatory Commission has pressured the Department of Justice to sue the state to allow relicensing, and to side with the nuclear operator instead of the state.

The Anshas Nuclear Reactor outside of Cairo has leaked small amounts of radioactive water. See this, this and this.

The New York Times has a must-read report on a situation at a reactor hundreds of miles from Fukushima which hasn’t turned into a catastrophe net, but could become a large-scale disaster:

Three hundred miles southwest of Fukushima, at a nuclear reactor perched on the slopes of this rustic peninsula, engineers are engaged in another precarious struggle.

The Monju prototype fast-breeder reactor — a long-troubled national project — has been in a precarious state of shutdown since a 3.3-ton device crashed into the reactor’s inner vessel, cutting off access to the plutonium and uranium fuel rods at its core.

Engineers have tried repeatedly since the accident last August to recover the device, which appears to have gotten stuck. They will make another attempt as early as next week.

But critics warn that the recovery process is fraught with dangers because the plant uses large quantities of liquid sodium, a highly flammable substance, to cool the nuclear fuel.

Prefecture and city officials found that the operator had tampered with video images of the fire to hide the scale of the disaster. A top manager at the plant recently committed suicide, on the day that Japan’s atomic energy agency announced that efforts to recover the device would cost almost $21.9 million. And, like several other reactors, Monju lies on an active fault.

Chubu Electric Power Co. said Friday that 43 pipes in a turbine steam condenser were found to be damaged at the Hamaoka nuclear plant in Shizuoka Prefecture, after the utility last month probed the leak of seawater into a reactor at the plant.

Two other pipes were found to be deformed, the utility added, without elaborating.

On May 14, some 5 tons of seawater entered the No. 5 reactor at the plant in the city of Omaezaki, following the discovery of around 400 tons of seawater in the condenser, which cools steam from the turbine and turns it into water.

The trouble occurred during work to put the reactor into a state of cold shutdown, according to Chubu Electric. At that time, about 530 tons of water were flowing per hour through the recirculation pipe for adjusting the water volume inside the reactor.

As the recirculation pipe had a fracture on its welded part near the lid, water that gushed out of it possibly damaged the pipes, the utility said.

As of June 4th, highly radioactive steam was escaping inside reactors at Fukushima:

As of June 14th, radioactive steam was still escaping into the air:

Japan is dangerously contaminated by radioactivity over a far larger area than previously reported by TEPCO and the central government according to new reports from multiple sources. The prefectural government of Iwate released new data that shows radioactive contamination of grass exceeds safety standards at a distance of 90 to 125 miles from the damaged Fukushima nuclear power plants.

The prefectural government found on Tuesday radioactive cesium exceeding the limit of 300 becquerels per kilogram in grass collected from pastures in four areas, including Tono and Otsuchi. The areas are located about 150 to 200 kilometers north of the Fukushima nuclear power plant.

Science Magazine reports that Japanese scientists have become so concerned about the health of their children that they have initiated their own radiation monitoring program and made their own maps. The results are shocking.

It shows one wide belt of radiation reaching 225 kilometers south from the stricken reactors to Tokyo and another extending to the southwest. Within those belts are localized hot spots, including an oval that encloses northeast Tokyo and Kashiwa and neighboring cities in Chiba Prefecture.

A map of citizen measured radiation levels shows radioactivity is distributed in a complex pattern reflecting the mountainous terrain and the shifting winds across a broad area of Japan north of Tokyo which is in the center of the of bottom of the map. 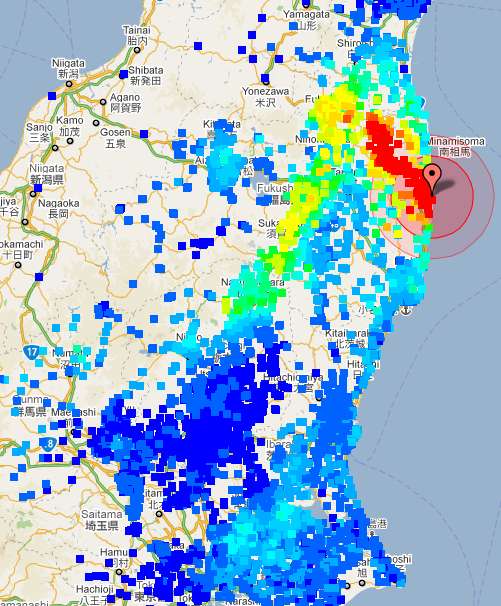 Radiation limits begin to be exceeded at just above 0.1 microsieverts/ hour blue. Red is about fifty times the civilian radiation limit at 5.0 microsieverts/hour. Because children are much more sensitive than adults, these results are a great concern for parents of young children in potentially affected areas.

I’ve previously noted that some Japanese tea is contamination with radiation. And now, reports of radioactive tea shipped into other countries are starting to surface.

The journal Nature notes that the governments knew, but covered up, early knowledge about the release of radiation from Fukushima.

“We have 20 nuclear cores exposed, the fuel pools have several cores each, that is 20 times the potential to be released than Chernobyl,” said Gundersen. “The data I’m seeing shows that we are finding hot spots further away than we had from Chernobyl, and the amount of radiation in many of them was the amount that caused areas to be declared no-man’s-land for Chernobyl. We are seeing square kilometres being found 60 to 70 kilometres away from the reactor. You can’t clean all this up. We still have radioactive wild boar in Germany, 30 years after Chernobyl.”

TEPCO announced that the accident probably released more radioactive material into the environment than Chernobyl, making it the worst nuclear accident on record.

Meanwhile, a nuclear waste advisor to the Japanese government reported that about 966 square kilometres near the power station – an area roughly 17 times the size of Manhattan – is now likely uninhabitable.

In the US, physician Janette Sherman MD and epidemiologist Joseph Mangano published an essay shedding light on a 35 per cent spike in infant mortality in northwest cities that occurred after the Fukushima meltdown, and may well be the result of fallout from the stricken nuclear plant.

The eight cities included in the report are San Jose, Berkeley, San Francisco, Sacramento, Santa Cruz, Portland, Seattle, and Boise, and the time frame of the report included the ten weeks immediately following the disaster.

“There is and should be concern about younger people being exposed, and the Japanese government will be giving out radiation monitors to children,” Dr MV Ramana, a physicist with the Programme on Science and Global Security at Princeton University who specialises in issues of nuclear safety, told Al Jazeera.

According to Gundersen, the exposed reactors and fuel cores are continuing to release microns of caesium, strontium, and plutonium isotopes. These are referred to as “hot particles”.

“We are discovering hot particles everywhere in Japan, even in Tokyo,” he said. “Scientists are finding these everywhere. Over the last 90 days these hot particles have continued to fall and are being deposited in high concentrations. A lot of people are picking these up in car engine air filters.”

The hot particles on them can eventually lead to cancer.

“These get stuck in your lungs or GI tract, and they are a constant irritant,” he explained, “One cigarette doesn’t get you, but over time they do. These [hot particles] can cause cancer, but you can’t measure them with a Geiger counter. Clearly people in Fukushima prefecture have breathed in a large amount of these particles. Clearly the upper West Coast of the US has people being affected. That area got hit pretty heavy in April.”

Gundersen pointed out that the units are still leaking radiation.

Gundersen worries about more earthquake aftershocks, as well as how to cool two of the units.

“Unit four is the most dangerous, it could topple,” he said. “After the earthquake in Sumatra there was an 8.6 [aftershock] about 90 days later, so we are not out of the woods yet. And you’re at a point where, if that happens, there is no science for this, no one has ever imagined having hot nuclear fuel lying outside the fuel pool. They’ve not figured out how to cool units three and four.”

A water decontamination system has been halted after a rapid rise in radiation. Radiation limits were reached in 5 hours, when it wasn’t supposed to happen for a month

As Jamail notes, the long-term prognosis is challenging:

“Units one through three have nuclear waste on the floor, the melted core, that has plutonium in it, and that has to be removed from the environment for hundreds of thousands of years,” he said. “Somehow, robotically, they will have to go in there and manage to put it in a container and store it for infinity, and that technology doesn’t exist. Nobody knows how to pick up the molten core from the floor, there is no solution available now for picking that up from the floor.”

Dr Sawada says that the creation of nuclear fission generates radioactive materials for which there is simply no knowledge informing us how to dispose of the radioactive waste safely.

“Until we know how to safely dispose of the radioactive materials generated by nuclear plants, we should postpone these activities so as not to cause further harm to future generations,” he explained. “To do otherwise is simply an immoral act, and that is my belief, both as a scientist and as a survivor of the Hiroshima atomic bombing.”

Gundersen believes it will take experts at least ten years to design and implement the plan.

“So ten to 15 years from now maybe we can say the reactors have been dismantled, and in the meantime you wind up contaminating the water,” Gundersen said. “We are already seeing Strontium [at] 250 times the allowable limits in the water table at Fukushima. Contaminated water tables are incredibly difficult to clean. So I think we will have a contaminated aquifer in the area of the Fukushima site for a long, long time to come.”

Unfortunately, the history of nuclear disasters appears to back Gundersen’s assessment.

“With Three Mile Island and Chernobyl, and now with Fukushima, you can pinpoint the exact day and time they started,” he said, “But they never end.”