Yves here. I’ve long been interested in the German approach to housing, since it has two noteworthy features: very high rates of rentals and reasonable costs. This post from MacroBusiness provides a short but very instructive overview. I’m intrigued to see this article highlight an issue that I have stressed as a New York City resident, where tenants have much stronger rights than almost anywhere in the US: that strong tenant protections actually help landlords. The result is that people rent not because they can’t afford to own (which means they are financially less stable) but because they prefer not to (for instance, they prefer the flexibility, or decided to put their money in a second home or in investments). And tenants who have property rights (as in the landlord cannot deny them a lease renewal if they are current on their rent) not only take better care of their unit, but I’ve seen them actually make meaningful investments in them (this happens a lot in my building).

A few months ago, after posting numerous articles advocating the Texan approach to land-use planning, I promised fellow MacroBusiness blogger, The Prince, that I would undertake an analysis of the German housing system, which is regarded as amongst the most affordable and liberal in Europe.

In my findings presented below, I have compared and contrasted the German housing system with that of the United Kingdom (UK), which is considered amongst the most unaffordable and supply-constrained markets in the world.

You will see that German and UK housing policies are polar opposites, with the former providing highly responsive housing supply, significant rental controls, and tighter credit regulations compared with the latter.

Before I kick-off, consider the following broad indicators relating to the German and UK housing markets. 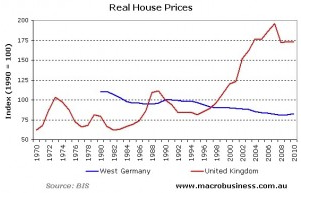 Second, consider the rate of population growth in both countries: 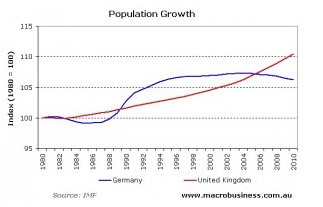 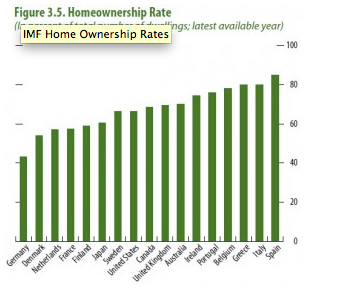 Germany has some distinct features that enables it to provide a plentiful supply of housing in response to increasing demand.

First and foremost, the German constitution contains an explicit ‘righ-to-build’ clause. According to The Policy Exchange:

…this “means that everyone is entitled to a permission to build on his or her property as long as there is no explicit legal rule against it.

…if the proposed building fits into the plan, permission has to be granted and if the local authorities deny it then a court will enforce it…

Although there is very close control of what can be built on any site, provided it meets the requirements of the master plan, a developer just can get on and build new housing without seeking development permission.

Most importantly, the local governments that control the planning process have a direct financial incentive to provide land for housing, since they receive grants based on the number of inhabitants. Therefore, encouraging development is an important way for local politicians to increase their budgets.

Now compare the liberal German system to the centrally planned approach in the UK, which has for decades explicitly constrained the supply of land for development.

First, UK cities are surrounded by strict ‘greenbelts’ (similar to urban growth boundaries), which prevent development past a certain point. These greenbelts have significantly restricted the availability of land for development, helping to push up prices.

Second, and related to above, the overriding planning objective in the UK has been ‘urban containment and ‘densification’. There is now a target that 60% of all land for housing should be brownfield land – i.e. land which has already been developed for some other purpose – which necessarily means the restriction of land supply and higher land prices.

Third, any change from the status quo – such as a change in land use from rural to urban, housing to office, or an increase in housing size – requires planning permission.

Finally, the UK operates a centralised fiscal system, whereby local authorities – which are the primary decision makers on development and have statutory obligations to provide services for new houses – receive very little revenue from increased population and housing. As such, these local authorities tend to oppose development.

Summing it up, the UK and Germany share all the factors that explain housing demand…

However, as comparable as they are with regard to housing demand, they are wildly different in terms of housing supply… The Germans built more houses than the British, both in per capita and absolute terms.

The EU collects data for the housing markets of its 27 member states. According to their statistics, Germany’s rate of dwellings completions per 1,000 inhabitants was consistently higher than the UK’s. In some years the difference was only 10 per cent, in others more than 110 per cent.

The differences in completions were also reflected in the land made available for development. The Cologne Institute for Economic Research calculated that last year there were 50 newly developed hectares of land per 100,000 population in Germany but only 15 hectares in the UK.

The German rental system is another key factor contributing to the stability and affordability of the housing market. While the majority of rental dwellings in Germany are private, rents are regulated and prices are prevented from increasing sharply. Tenants also have security of tenure as long as they pay the rent and behave well, except on the rare occassion when a member of the landlord’s family needs the accomodation or when the building is going to be replaced.

Further, because renting is the dominant housing choice in Germany, the political system is highly sensitive to tenants’ rights and perecived threats to the status quo typically receives prominant media attention and political responses.

Since home prices are relatively stable (owing to liberal supply) and renters enjoy secure tenure, Germans have little incentive to rush into owner occupation. As such, Germany doesn’t suffer from the ‘panic buying’ and speculation often present in bubble housing markets.

In comparison, the UK rental system could not be more different. According to the RICS European Housing Review:

The UK now has probably the most liberalised housing sector in Europe since the 1989 abolition for new tenancies of previous controls. There is only limited security of tenure for the first six months of a tenancy in the most common types of rental contract and rents are freely negotiable…

The typical rental property is a terraced house in an outer or inner suburb of a town or city. The property will rarely be new: only 13% are post-1985, and almost two-thirds are pre-1945, although most will have been recently modernised.

And because of the volatile nature of UK home prices (caused largely by supply constraints) and the lack of security of tenure in the rental market, ’panic buying’ from first-time buyers and investor speculation is prevelent when house prices are rising, adding to price volatility:

House price expectations influence tenure choice. Periods when rising prices are expected encourage households to enter owner occupation and the opposite occurs when prices are expected to stagnate or fall. Demand cycles for owning and renting consequently tend to vary over time. Currently, more people are renting because of expectations of continuing falling prices as well as because of greater problems in finding mortgages and raising deposits.

Mortgage finance in Germany is also conservative relative to most economies that have experienced housing bubbles. According to RICS:

…credit availability is more strictly rationed in Germany compared with the pre-financial crisis experience in many other countries. For example, there is conservative loan appraisal, no sub-prime segment and thorough vetting of loan applicant details.

Moreover, base loan-to-value ratios (LVRs) from mortgage banks (the main provider of home loans) are capped at 60%, although other unsecured loans are often added into loan packages (at higher interest rates), which tends to increase the overal LVRs.

In contrast, the UK mortgage market was fully deregulated in the early 1980s. During the height of the 2000s credit/housing bubble, UK lenders were offering 100% plus LVR (i.e. no deposit) mortgages to first-time buyers. However, since the onset of the global financial crisis, lenders have rationed credit and required higher deposits (reduced LVRs), thus contributing to the boom/bust cycle inherent in the UK housing market.

The contrast between the German and UK housing markets couldn’t be more stark.

Unlike Germany, the UK housing market is essentially a bubble factory. Wheras Germany’s highly responsive supply ensures that extra demand manifests itself in rising new home construction rather than increased prices, the opposite is the case under the UK’s restrictive land-use policies.

The UK’s deregulated rental market and lack of tenure has also ensured that renting is a second rate option, thereby encouraging residents to strive (and borrow big) for owner occupancy. And of course the UK’s lax financial system has been only too happy to oblige, providing households with no deposit mortgages during the boom followed by rationed credit during the bust.

When all these factors are combined, is there any wonder why Germany’s home prices have remained stable and affordable, and free of the speculative behaviour, ’panic buying’ , and price volatility inherent in the UK system?