Readers may be aware of the firestorm this blog kicked off by criticizing the decision of the Roosevelt Institute to accept a grant from the Peterson Foundation (later disclosed to be $200,000) to have its Campus Network, a group of college students affiliated with the Institute, its Campus Network, to prepare a budget for a Peterson-funded event, the “Fiscal Summit”. The purpose of the exercise was to discuss ways to reduce the fiscal deficit, when the Roosevelt Institute has heretofore taken the position that budget cuts at this juncture are bad policy (we cited two papers by Roosevelt Fellows as examples;many other Roosevelt Fellows, including Bill Black, Jamie Galbraith, Randy Wray, Rob Parenteau, and Marshall Auerback, have made similar arguments).

After writing a second post on this disgraceful episode, and cross posting one from Jon Walker, which analyzed the health care recommendations in the students’ budget and found them to be sorely wanting, I had wanted to step back from this fray a bit. However, readers continue to ask for an explanation as to how the Roosevelt Institute came to make the decision to cast its lot with Peterson.

I’m not privy to the Institute’s inner workings, and to the extent that particular Fellows of the Institute are, I doubt that it is appropriate for them to comment on a controversy. However, Jane Hamsher of Firedoglake, who posted the piece from Zach Kolodin, the student who heads the Roosevelt “Future Preparedness Initiative,” sent me an e-mail from Hilary Doe, who is the National Director of the Roosevelt Institute Campus Network and Young Professionals Network. Jane took this missive to be an official statement and advised me that it was “fair game for publication”.

I’m interested to get reader interpretations. The adminisphere at Roosevelt clearly saw the participation in the Peterson program as within their purview; note they “informed” the board rather than needed to obtain approval. It is not clear how extensive the disclosures to the board were (but anyone who knew anything about the Peterson Foundation should have seen this was going to be trouble). Nevertheless, it appears that the onus was on the board to intervene in a program management was keen to undertake.

As the National Director, I had been promoting our Blueprint for the Millennial America–a vision for the future established through in person and online visioning conversations with thousands of young people nationwide during 2010. When Peterson heard about the Blueprint for the Millennial America, they approached us to see if we wanted to include that vision in their summit alongside the budget plans of other organizations.

Because the only real push back we’d received on our Blueprint was to the effect of, “of course this is a great vision, but it’s made by young people, and it’s idealistic.” We wanted to prove that it was possible to actually achieve this vision for the future that our network had so passionately articulated, so we asked our network of thousands if they wanted to form working groups and design a Budget for the Millennial America that reflected their vision. The idea was received with tons of enthusiasm, and a group of entrepreneurial students in the network immediately got started work designing a comprehensive plan for the US that reflected their values and prorities between now and 2035.

As an initiative of the Roosevelt Institute, my board is always informed of the programming that we decide to engage in and that student self-initiate. They were supportive of our decision to take the grant that allowed us to do this work, and represent the important perspective of the millennials that will bear the consequences of the decisions our leaders in power make today. Beyond that, they did not have oversight over the process of engagement or the content that was ultimately produced–in fact, only the students did. We designed a forum for them, informed by their preferences, convened the working groups, providing research support for their ideas, and aggregated their preferences, but I can assure you that everything in the budget–each innovative idea, forward-looking vision for america, and hard fought compromise–was the result of the Millennials in our network. They coalesced around a vision together, designed the policy options to get them there, and ultimately produced, through a democratic process, a Millennial-generated vision for the future of America.

These are the names listed at the Roosevelt Institute site as members of the Board of Directors: 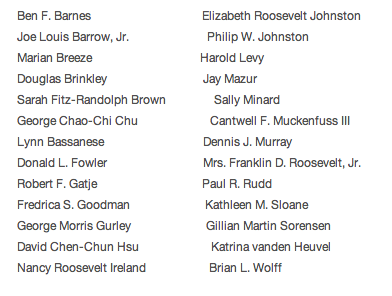 Since the firestorm over the grant has taken place in the blogosphere, it is quite possible that the board remains unaware of the damage done to the Roosevelt name.

Update: I neglected to clip the section from the Roosevelt site with the officers of the board, lordie. As discussed in comments, it is possible that the Peterson initiative was presented only to a board subcommittee rather than the full board, and we also have no way of knowing when that conversation took place relative to the negotiations with the Peterson Foundation: 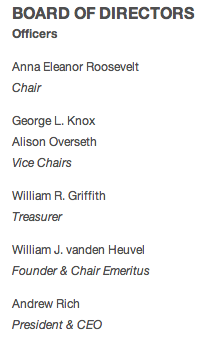