We took an immediate dislike to the so called Bank of America mortgage settlement, in which the trustee for 530 mortgage trusts, Bank of New York, has entered into deal in which the bank will pay $8.5 billion to settle not only putback liability (having to compensate investors by buying back loans that never should have been put in the trusts in the first place) but also chain of title liability to investors (otherwise known as “my dog ate your mortgage”; note this would NOT impair the ability of homeowners to raise that issue in foreclosure).

We criticized the deal as being bad for homeowners (as in likely to accelerate foreclosures, rather than alleviate them, as claimed), bad for investors (due to the amount being too low for putbacks and an outrageous sellout based on the waiver for chain of title problems) and rife with conflicts of interest. Indeed, almost immediately after the settlement was announced, a group of investors who had been pursuing their own claims on three of the trusts in the settlement filed a petition as a means of objecting to the deal and its failure to provide a means for investors like them to opt out.

Two public officials, Eric Schneiderman, the New York attorney general, and Representative Brad MIller, who is a member of the House Financial Services Committee, apparently also suspect the pact does not pass the smell test and are asking some tough questions.

As described by both Bloomberg and Gretchen Morgenson of the New York Times, Schneiderman sent a letter to Bank of America and the 22 investors that suggested that he may oppose the deal. The bone of contention is that the parties that put this deal together failed to include or even consult all the investors (that is an allegation in the petition mentioned above). This is a non-trivial issue. Investors are afraid to sue Wall Street firms (they are concerned they will be excluded from information or otherwise relegated to less favored nation status, which would then hurt them competitively). So while they might have been able to register their views privately and anonymously if the attorney who put this deal together had been acting in their interests, by being exclude, the onus on them is now to sue, which is a far more visible and risky stance. Thus it’s entirely possible that the majority of the economic interests in most, even all, of these trusts are opposed to the deal, yet they’ve been effectively stymied by the way the settlement was put together. (It is stunning that the attorney, Kathy Patrick, is having her $85 million fee paid by Bank of America. Even if she obtained waivers, the optics and the incentives are clearly troubling).

Investment managers were asked to identify clients affiliated with New York state government entities and public authorities, as well as nonprofit or charitable corporations that invested in the 530 residential mortgage-securitization trusts established from 2004 to 2008, according to copies of the letters obtained by Bloomberg News. The letters also request the total par amount and current market value of all securities issued by the trusts covered in the settlement agreement for each client that meets the criteria.

This line of inquiry suggests that the AG’s office either has concluded the settlement is bad for investors or is at least investigating that theory and wants to be in a position to object. I would assume that the AG would act on behalf of any New York government entities and would further allege that the 22 investors had breached their fiduciary duty to the non-profits and charitable organizations (the investor equivalent of widows and orphans).

His emphasis on obtaining the dollar amount held in each of the various trusts points to objecting to the settlement on any trusts where a 25% (or possibly a 51%, depending on what basis he uses for his argument) threshold has not been met. One securitization expert who does not have a dog in this fight noted, by e-mail:

The investor group almost certainly does not represent 25% of each of the deals subject to the settlement yet the settlement seeks to waive future claims by investors in all of the deals. This suggests that BoNY, as trustee, is permitting the settlement to proceed on deals where the 25% rule hasn’t been met despite the clear terms of the PSA. Why would the trustee permit such a relaxation of the PSA rules in this settlement when it was so resistant to it in other cases (specifically the Greenwich Financial case)?

As we noted earlier, Bank of New York’s conduct on this deal stinks:

The biggest challenge, in the court of public opinion as well as presumably before the judge, is the idea that this is not at all an arm’s length transaction, and that the trustee, Bank of New York, is effectively engaged in self-dealing, selling out the investors to save its own hide. To put it more simply, parties that are presented as representing the investors’ interests are actually working to advance the BofA cause.

Bank of America gave the Trustee, Bank of New York, a side letter than indemnifies it for all liability incurred in entering into this deal. That means if any investors are unhappy, the costs are borne by BofA (the party that benefits from this settlement) not Bank of New York, the party supposedly representing the investors….

the side letter also indemnifies the trustee broadly against liability in the pooling and servicing agreements, the contracts that govern these deals. Since trustees like Bank of New York provided multiple certifications that the trusts held the assets (and that would include observing the chain of title niceties) when lawsuits all over the country have established that that did NOT happen. In addition, a senior Countrywide employee in testimony in Kemp v. Countrywide said Countrywide had retained the notes (the borrower promissory note) when the trust was supposed to have them. Whoops!

So the trustees have a ton of liability the are eager to escape. And that means that the indemnification in the Bank of America side letter is tantamount to a very big bribe to Bank of NY to go along with this deal.

The Bloomberg article also covers the response BoNY made in court to the challenge by the dissident investors. It seek to block discovery till other parties have objected. This gambit is not merely a delaying tactic but a ruse to neuter discovery, since the timeframe between the filing of objections and the court hearing is too short to allow for meaningful discovery to take place.

But even more brazenly, Bank of New York asked that no other parties be permitted to intervene in the case. That is a admission that it is not even trying to pretend to act on behalf of investors; it is actively trying to shut them down. And this bit is so disingenuous as to amount to misrepresentation:

As for its alleged conflicts of interest, Bank of New York Mellon said the governing agreements provided that the trustee be indemnified.

That’s irrelevant. The indemnification in question is not only broader than the sort contained in the pooling and servicing agreement (which does NOT contemplate more expansive waivers being entered into) but it specifically indemnifies BoNY from liability from investor claims, yet comes from Bank of America! The party that provides indemnification is almost without exception a principal indemnifying an agent, not the party on the other side. This arrangement is so irregular as to beggar belief.

But this should come as no surprise. Bank of New York has a history of slimy dealings. From Mark Ames, the former editor of the famed (one might say notorious) Russian newspaper Exile:

This is just sickening. Looks like this is a big part of the scam we’ve been looking for: moving the MBS’s onto Fannie/Freddie’s books, then settling for pennies on the dollar with no transparency and it’s all done and settled.

And in the middle of all this is BoNY, no stranger to plunder, fraud and covering everyone’s trails. BoNY was the bank used by the Russian oligarchs and by Yeltsin’s own family to steal tens or hundreds of billions in the 1990’s. At some point the whole scandal just got hushed up, a couple people took the fall and no one talked about it again. There was a point in mid-1999 when it looked like everyone from Yeltsin to IMF head Michel Camdessus, not to mention BoNY, were going down. Then some deal was cut that no one ever figured out–had to do with Yeltsin, Putin, the war in Kosovo…anyway, suddenly the Republicans lost interest in hearings and the whole thing shut down and that was that.

That brings us to Brad Miller’s concerns. The Congressman wrote to Ed DeMarco, the acting head of the Federal Housing Finance Agency. He raised the issue of the Bank of New York conflicts of interest and the questionable indemnification, and turned to the adequacy of the settlement and the failure to do any discovery: 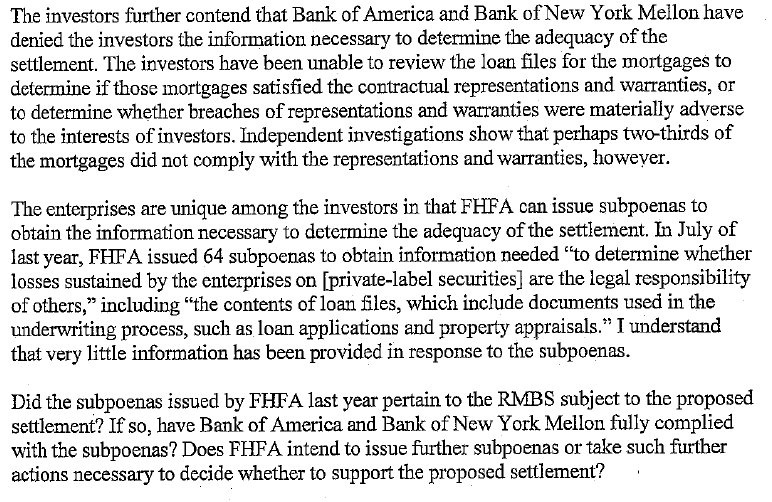 It’s clear that Bank of America is trying to position this settlement as a “we’ve put this mortgage mess behind us” strategy. Fortune published a puff piece on its CEO Brian Moynihan, and it stressed the differences with his predecessor, Ken Lewis, and did a bit of “Mission Accomplished” cheerleading about the settlement. And as we indicated, the bank and the other parties to the deal no doubt had called in some chips to get Bill Clinton to tout it as good for homeowners.

But interestingly, the media is not falling into line, perhaps because the usual application of porcine maquillage cannot cover up how ugly the settlement is. Maybe they’ve learned from the crisis to be wary of banks claiming to have cleared out their toxic assets and exposures. Bloomberg ran an article on June 30 stating the obvious: a lot of investors think 2% of original par value is too cheap. Similarly, the New York Times carried a story over the weekend at odds with the Clinton/bank PR: the pact is meant to, and will, accelerate foreclosures.

As we’ve stressed, following the observations of Richard Bookstaber , in tightly coupled systems, measures to reduce risk typically do precisely the opposite. The Charlotte bank may have thought it had found a way to cut loose its chain of title risk and leave it stranded with investors. But the pushback on the settlement, which has the potential to put the level of the bank’s misconduct on the mortgage crisis, has the potential to bring this festering problem to a head.