We had thought the authorities and the banks (no doubt with winks and nods from the Fed) would work to make sure that haircuts on collateral were maintained while the Washington game of debt ceiling chicken played itself out.

Either the Merc (more formally, the Chicago Mercantile Exchange) wasn’t on the distribution list or it decided not to play ball. It announced an increase in haircuts on Treasury and agency securities today (meaning Treasuries and agencies are now given less credit than before when posted as collateral). But it increased haircuts even more on foreign sovereign debt. This will force players who have been using any of these assets as collateral that are also pretty fully leveraged to either cut their positions or put up more cash or other collateral. But note the concern stated is “market volatility” rather than creditworthiness per se (hat tip reader Robert M, from Clusterstock): 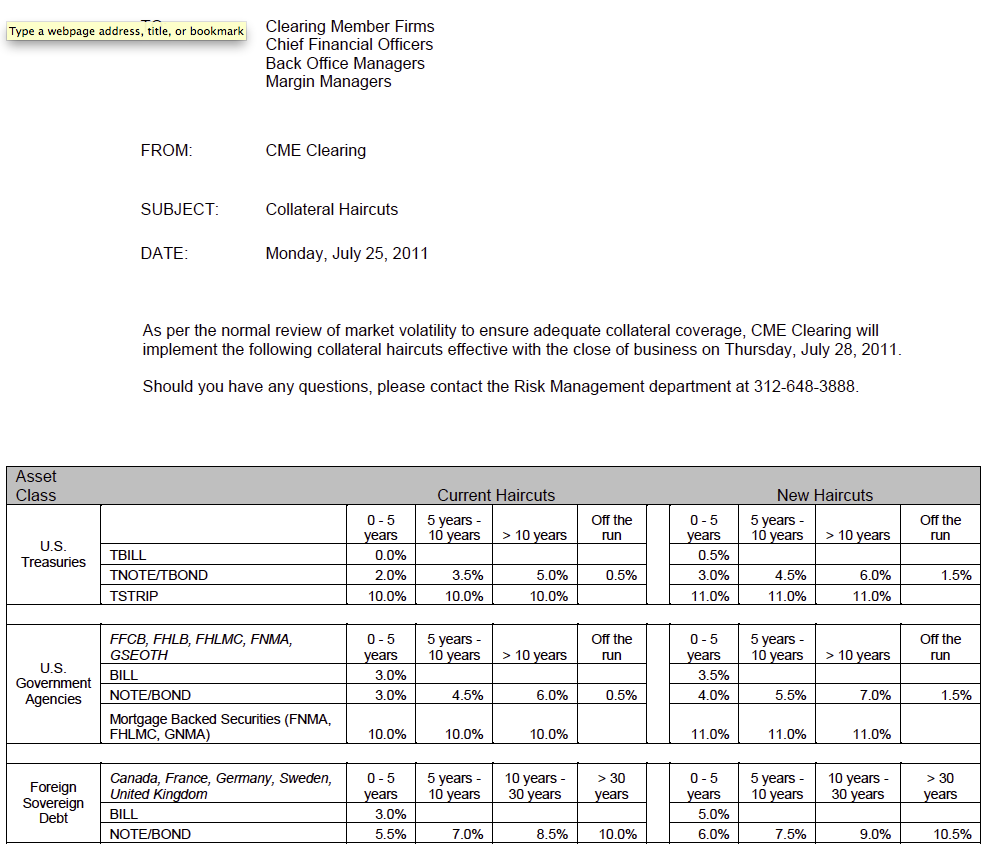 This is the first sign I’ve seen that looks troubling. The stock and Treasury bond markets have actually been pretty well behaved thus far (we saw vastly bigger one day moves in Tbond prices during the crisis, and the news on Friday was decidedly not pretty). My assumption has been that things would just be wobbly and not go critical until the Federal government started actually shutting operations and the gridlock persisted despite the howling from the public. But forced deleveraging feeding on itself could change that picture.

The financial system operates on leverage. The central bank backstopped players can probably be cajoled into not cutting repo haircuts to each other on Treasuries and agencies. But repo and collateral haircuts are a function not just of the collateral but who you are in relationship to your credit provider. For instance, the big prime brokers (Goldman and Morgan Stanley are over 60% of this market) increased haircuts on a lot of assets during the crisis to a degree where some hedge funds felt they were being abused (as in the increases were in excess of what even the rocky market conditions would buy, and some felt the dealers were trying to take advantage of them). Treasuries are also one of the biggest types of collateral for derivatives positions, and some may blow out if investors start shedding risk at the same time the collateral is worth less.

Mind you, the flip side is even though this is another sign we aren’t in Kansas any more, these changes in haircuts are trivial compared to the ones that blew up the banks in the crisis. Look at this table from ECONNED. Take a look at the “AAA CDO” line. 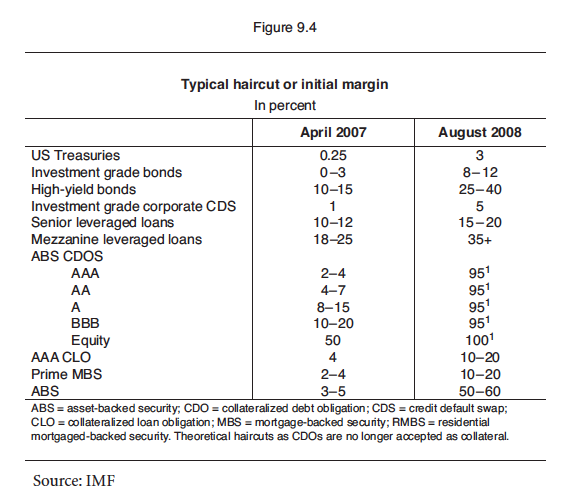 Notice also that even Treasury haircuts rose during the crisis, so widening haircuts in roiled markets is normal. Nevertheless, this change is a sign that some parties are already starting to trim their sails as a precaution against rough weather.