By Marshall Auerback, a portfolio strategist and hedge fund manager

For once, President Obama has sought to address his progressive critics, without caricaturing them as a bunch of out of touch, irresponsible radicals. At his press conference on Friday, the President made the following argument:

If you are a progressive, you should be concerned about debt and deficit just as much as if you’re a conservative. And the reason is because if the only thing we’re talking about over the next year, two years, five years is debt and deficits, then it’s very hard to start talking about how do we make investments in community colleges so that our kids are trained. How do we actually rebuild $2 trillion worth of crumbling infrastructure.

It would be very helpful for us to be able to say to the American people: “Our fiscal house is in order. So, now the question is, what should we be doing to win the future, and make ourselves more competitive, and create more jobs, and what aspects of what government’s doing are a waste, and we should eliminate.” And that’s the kind of debate that I’d like to have.

You want a debate on this, Mr. President? Consider it done. In a nutshell, your proposed cuts will NOT set the stage for a “progressive agenda” going forward. The austerity measures contemplated by your Administration will suck income and wealth out of the private sector. This will cause private spending to fall, leading to yet more downsizing and unemployment. Tax revenues will decline further as corporate profitability sags, social welfare expenditures will rise as the automatic stabilizers kick in. And before you know it, we’ll be bumping up against that troublesome debt ceiling again, experiencing the same kind of political grandstanding that is characterizing today’s conflict, sort of like a nightmare version of “Groundhog Day”. The government will, in effect, be chasing its own tail. You will not “put the nation’s fiscal house in order”, Mr. President, but tear down its foundations even further.

Democrats, like President Obama, persistent invoke the halcyon Clinton budget surpluses as some kind of Holy Grail for the country. But the mythical “virtue” of the Clinton budget surpluses is one of those unfortunate pieces of misinterpreted history that continues to afflict the Democrats in regard to their conduct of fiscal policy. Implicit in this argument is the belief that somehow balanced budgets are the norm, that President Clinton’s responsible stewardship righted the fiscal ship of state, after it has been left close to “insolvent” by the irresponsible legacy of Reagan’s supply-side economic adventurism.

Well, let’s look at the history first: for the past 82 years, the US government’s budget has been in deficit of varying proportions of GDP over 80 per cent of the time. There is nothing insidious or inherently sinister about these deficits. Each time the government tried to push its budget into surplus, a major recession followed which forced the budget via the automatic stabilizers back into deficit, ultimately helping to put a floor on demand and prevent a recurrence of the Great Depression.

All debt is not created equal. The expansion before the end of the Internet bubble crash in 2001, and the subsequent recovery in the 2001-2008 period (which had its roots in the housing bubble and massive financial fraud) were both largely products of an unprecedented private sector borrowing binge. Both businesses AND households borrowed (and spent) on an unprecedented scale. If a picture is worth a thousand words, then consider this chart, courtesy of Professor Scott Fullwiler 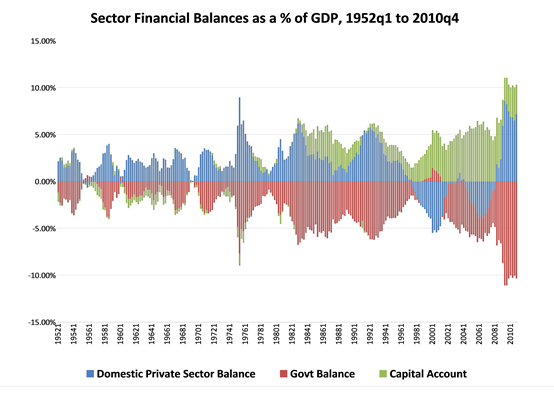 During the Clinton years, everybody – Democrats and Republicans alike – applauded these surpluses because it meant that the government’s outstanding debt was being reduced. But Professor Fullwiler’s chart confirms that as the government budget moved to surplus during the latter years of the Clinton Presidency, the private sector’s deficit correspondingly grew larger: It was the mirror image to the budget surplus plus the current account deficit. In other words, this chart illustrates that the budget surplus meant by identity that the private sector was running a deficit.

Why is that? It is because budget surpluses suck income and wealth out of the private sector. As the budget surpluses grew, households and firms were going ever farther into debt, and they were losing their net wealth of government bonds. Even when the government went back into deficit, it was insufficient to offset the cumulative effect of huge private debt accumulation and rising trade deficits, both of which ultimately laid the foundations for the Great Financial Crash of 2008.

It is true that we could diminish our budget deficits via an improving trade account. But the trade option is highly problematic: It’s all very well to suggest that we should export more, but it takes two to tango, and if our trading partners (such as Germany, Japan or China) do not want to increase US imports, there’s very little the US can do. When I was living in Japan in the 1980s, this was a huge issue: the US tried to “force” Japan to revalue the yen (shades of China today), and pressured the Japanese into a whole host of liberalizing/deregulatory measures designed to increase US exports to Japan. Hardly any of them worked. Japan’s trade surpluses continued to expand.

There is also the issue of government restrictions at home. China would glad buy tons of our military hardware, but we restrict its sale on the grounds of national security. Since this is one of the areas where the US literally has a “cutting edge”, it makes export growth even more problematic.

Finally, you run into the old fallacy of composition argument: not every country can be a so-called “export superpower” as our President keeps urging on the US. As an example, consider Germany, which refuses to even run a current account deficit with its fellow European Union “partners” (even though this is arguably in Germany’s economic self-interest, as it would mitigate some of the strains currently being experienced in the euro zone periphery). Do we seriously expect the Germans to run big trade deficits with the US?

All things equal, then, leaves the government sector. Given our current account deficit (and the corresponding demand leakage) to sustain anything like the level of aggregate demand required to reduce unemployment, rebuild our infrastructure, etc., that means our budget deficit has to be even larger to allow our private sector to save.

To re-emphasize the point which the President should be making day in and day out: It was NOT “profligate” government expenditures that created the current fiscal state of affairs. To the extent that the US has experienced any “government profligacy” over the past 3 years, it is because of our mindless bailout of Wall Street institutions (and note how conspicuously quiet today’s fiscal hawks were during that period when the Treasury and Federal Reserve established trillions of dollars of financial guarantees to fundamentally insolvent banking institutions). The real issue is that those who are better off don’t want to have government intervention in economic affairs unless it benefits them. When the government intervenes with bailouts, Wall Street stands with hat in hand.

No one wants to bear the actual discipline of markets if that means losses. Those at the high end of income distribution aren’t against deficits when it suits them, but are frequently against it if that might make the workers stronger, or create competition for private businesses (in the case of a public option healthcare reform, for example).

Here’s the thing: deficits DO matter, but not in the way that is being formulated by President Obama. if a government spends too much after getting us to a state of full employment and higher economic growth, excessive government spending can create inflationary pressures. So to that extent, there is a limit. But acknowledging that unconstrained government spending can create inflation is not the same as arguing that it is in any way operationally constrained. Contrary to conventional “gold standard” thinking, where every dollar spent has to be ‘financed’ by an ounce of gold already in existence, our government can afford anything that it is for sale in its own currency (unless we artificially constrain ourselves via stupid self-imposed limits such as a debt ceiling – the US being the only sovereign issuer of its currency that chooses to constrain itself this way).

The debate that the President is calling for, then, should not be focused on “affordability” but on what constitutes the national priorities of our government. The political process, not a non-existent gold standard, or a foolishly imposed debt ceiling of questionable constitutionality, should determine our national priorities. Promising jam tomorrow in exchange for “eating our peas” today might make for a good sound bite, but it is predicated on a fundamentally flawed model. The whole basis of our growth over the past quarter century has been based on households borrowing and the continuation of negative saving trends. A good place to start recovery efforts, therefore, would be to change this method of economic growth toward restoring incomes and job growth, rather than propping up zombie banks and embracing “rentier economics” through this misconceived emphasis of public debt reduction. No ostensible progressive can achieve anything close to the objectives ostensibly desired by the President, if we embrace his flawed economic thinking. Concerns about government deficits and the government debt have served as a very useful way of masking the real issue, the unwillingness of conservatives to allow the government to work for the good of the population, something that a democratic government is supposed to do.