The Eurozone crisis moved into phase 2 this August when the contagion spread to Italian debt, Spanish debt, and most EZ banks. Radical ECB actions prevented a disaster. This column argues that the ECB emergency policies are unsustainable politically and perhaps legally. The only policy combination that EZ leaders could agree on quickly enough involves political cover for ECB bond buying in exchange for national fiscal reforms of the German “debt brake” type.

IMF Chief Christine Lagarde made phase 2 official: “Developments this summer have indicated we are in a dangerous new phase” (Lagarde 2011).

Phase 1 was the Eurozone (EZ) periphery;

It is now possible that more Eurozone nations will need bailouts and Europe will fall into a Lehman-size recession (Wyplosz 2011).

This changes everything. Eurozone leaders must wake up and get a grip on the situation before it tumbles out of control. They’ve been sleepwalking since May 2010, so it may take a stock market crash to stir them to action – and the stock-market alarm clock looks set to go off soon.

There is a line between illiquidity and insolvency for nations and banks. However,

Fear-gravity can drag illiquid nations across the event-horizon and into the black hole of insolvency; this is the debt-service vortex shown in Figure 1. If the nation tries too-little-too-late austerity, it can fall into a Greek-like austerity vortex (Figure 1, ie austerity lowers incomes hence worsening the deficit).

As bank failures would mean too-big-to-fail bailouts – and such bailouts would throw some nations into insolvency (the Irish vortex in Figure 1) – the banking and government problems are perniciously entwined (EZ bank liabilities are a multiple of EZ government debt). The connection also works in reverse; as banks hold vast amounts of government debt, sovereign insolvency could produce bank insolvency.

Recession fears are central (Figure 1); they feed on and are fed by the Lehman, Irish, debt-service, and austerity-trap vortices.

In early August 2011, fear-gravity pulled Italy and Spain and most of the major Eurozone banks sharply towards the event horizon.

Italian and Spanish yields jumped into solvency-alarm territory, EZ bank stocks plummeted, and both of their default-insurance prices soared.

The problem that makes this mess into an historic moment is the simple fact that the ECB’s actions are unsustainable politically, and perhaps legally. A situation where the unelected President of the ECB sends ultimatums to the Prime Ministers of large democratic nations cannot go on (especially when they call his bluff). And it will not. Someone needs to rouse EZ political leaders so they can work out a more permanent solution. 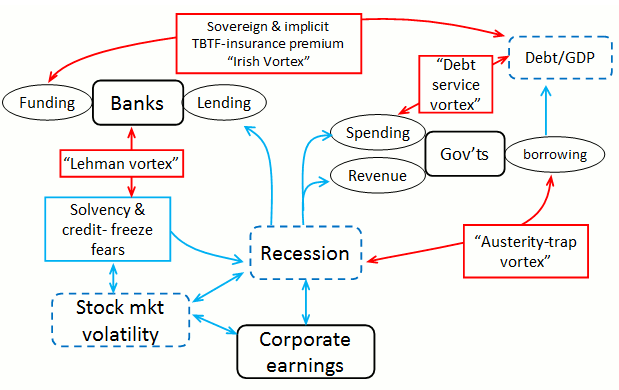 The Eurozone’s long-term flaws have been widely discussed by Vox columnists over the past few years; the last eBook provides a compendium of long-term solutions which are still relevant (Baldwin et al 2010; also see Suarez 2011 and Cooley and Marimon 2011).

The short term solutions, however, are much more limited. Someone needs to backstop the debt of solvent Eurozone nations. (Note that EZ banks are already backstopped in the short term by the ECB in the same way Irish, Greek, and Portuguese banks are backstopped already but in the longer run they too need more durable backstopping; see Onado 2011.) As Guido Tabellini said: We need to draw a line between EZ nations that are solvent and those that are not – before the market does it for us (Tabellini 2011).
There are two options:

The ECB continues backstopping government bonds, but gets political coverage (Wyplosz 2011), or

EZ leaders must choose between these two paths in the immediate term. But both debt-support options are politically infeasible unless the inflow of new debt is credibly controlled. No one in Europe wants to give a blank check to profligate governments. Here there are two options:

Vox columnists have discussed many variants (see the new EZ Crisis: Phase 2 page here), but the choice is really not that difficult, as Table 1 shows.

The only short-term solution that can be adopted fast enough is the combination of the ECB backstopping government debt in exchange for credible, domestic fiscal institutional reforms.

This was the package that was put together in the panic of early August 2011.

It seems likely to be the only one that could be embraced by EZ political leaders in a realistic horizon.
Table 1. Speed of short-run solutions.

Eurozone leaders thought they had fixed the problem with their July 2011 package. Although this has not yet been passed – and it does need passing – the July package is essentially irrelevant to Phase 2. As Gros (2011a) writes, “…the EFSF will simply not have enough funds to undertake the massive bond purchases now required to stabilize markets. It was sized to provide the financing promised to Greece, Ireland, and Portugal.” Moreover, the EFSF itself may get caught in a vortex.2

The debt of Spain and Italy is a few trillion euros. The EFSF is capped at €440 billion, but the real problem is that it is capped at all. Once investors start to fear it might run out of buying power, they will try to take out their trillions and thereby validate their fears.3

Much of the August panic was due to the growing perception that policymakers are paralysed by dysfunctional politics. Political leaders spun a web of fictions to shield themselves from the blame they deserved for the 2008 crisis and the resulting Great Recession as well as sluggish income and job growth. These fictions are hindering them from tackling the underlying problems.

EZ leaders are hoping against hope for growth redemption – a strong recovery would end almost all these problems costlessly.

But this hope has faded. Partly this is due to external factors (US policy paralysis and the current shortage of traditional macro policy leverage), but also partly due to Eurozone leaders’ failure to act – and increasingly, a perception of their inability to act. At this late date, it is better to pull out the aching tooth before the infection spreads to the point where more radical surgery is needed.

I think the stock-market alarm clock will finally wake up Europe’s leaders. I just hope they actually get up and put the crisis to bed, rather than hitting the snooze button and heading back to bed themselves. Leaders must act now, or prepare to become the Calvin Coolidges of the Eurozone.