Yves here. Police efforts to contain OccupyWallStreet have had the opposite effect to what the officialdom no doubt assumed would happen: that the demonstrators would either become discouraged or become violent, which would make it easy to discredit them. Instead, the macing of a group of women last weekend, followed by the arrest of over 700 people on Brooklyn Bridge on Saturdy, has given the movement legitimacy and media attention. It was the lead item on the BBC website over the weekend.

Press efforts to diminish the potential of this effort are now shifting. The initial MSM responses tended to the patronizing, emphasizing the fact that the group was small, camped out on the periphery of Wall Street, and harmless (harmless = weak, particularly when pitted against the might of the plutocrats).

Now that the ranks of participants are growing and prominent individuals like Nobel Prize winner Joseph Stiglitz have stopped by to show support, the new tactic is to attribute the increased interest to gawking rather than solidarity. For instance, the Financial Times headline is “Fed up and curious swell anti-Wall Street ranks.” So in one neat sentence, that suggests there is a hard (and by implication, not large) core of protestors, joined by malcontents and sensation seekers along for the ride.

But the experience of the protestors provides considerable evidence of broad based support: they’ve gotten more in pizza donations and socks than they need; many of the cops express sympathy; the overwhelming majority of passengers in cars that drove by them on Brooklyn Bridge waved at them or otherwise signaled approval.

And images are arresting. Just as televised footage from Vietnam made it impossible to sanitize the brutality of a ground war in Asia, so to are digital cameras and the ease of using social media and blogs to distribute images impeding the efforts of the officialdom to pretend that the protestors are not like the rest of us. Today’s photos include Marines who depict Wall Street as their new enemy: 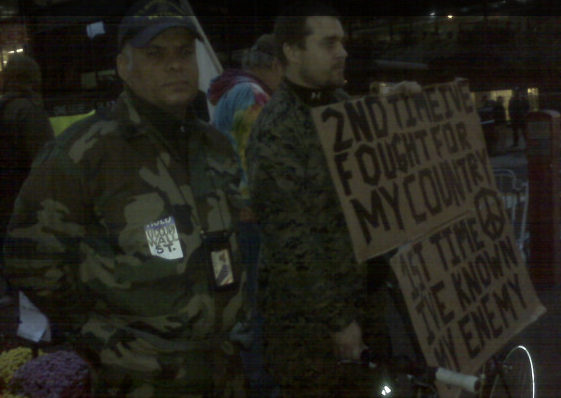 …and stories on We Are the 99 Percent: 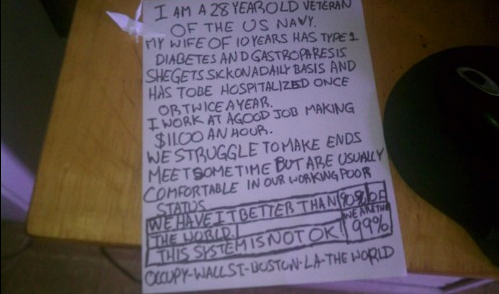 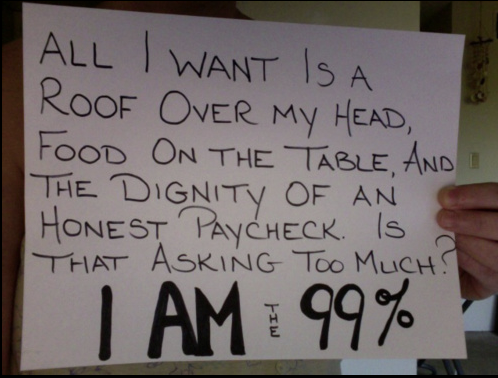 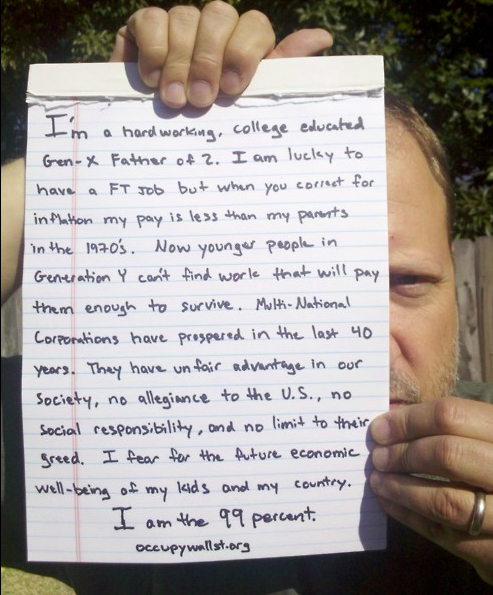 “We are the 99%” is brilliant, and Mark Provost highlights that theme in his post below. It puts the spotlight on the core issue: how economic and political control has moved into the hands of a tiny, irresponsible elite and its minions. It undermines the class-warfare-label-as-denigration strategy because social classes have roots, history, and at least once upon a time, some legitimacy. By contrast, the rise of an oligarchy of the top 1% (actually, more like the top 0.1%) is recent and its actions have been destructive to communities and established social arrangements.

Needless to say, following the Venezuelan saying, “A politician is someone who gets in front of a mob and tries to call it a parade,” one confirmation of OccupyWallStreet’s rising fortunes is that some soi-disnat progressive groups are trying to use it to burnish their brand (click to enlarge): 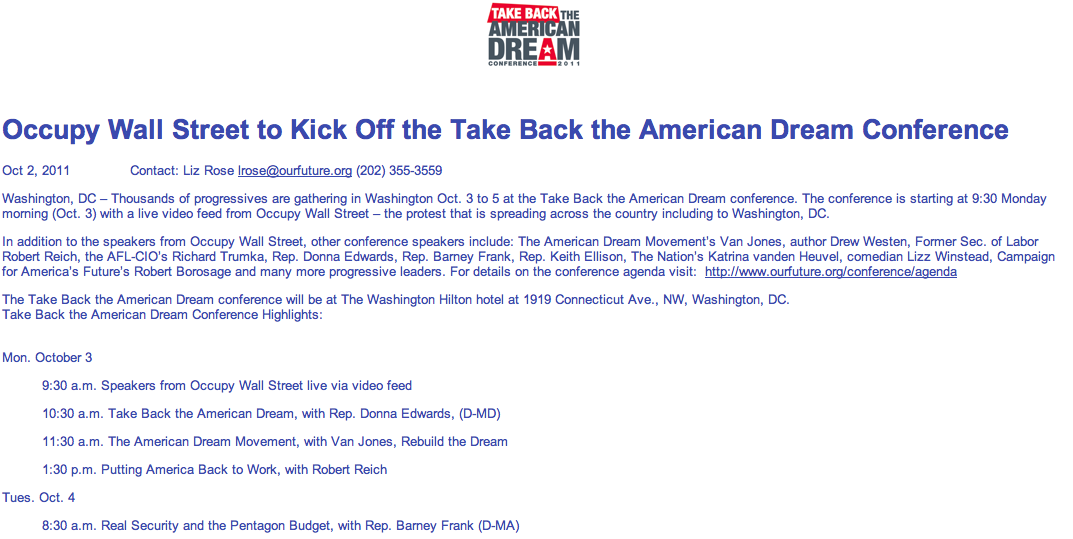 Maybe I am a bit jaded, but a lot of news organizations have also interviewed members and leaders of the OccupyWallStreet movement, and they don’t try to lay claim to them. For a mainstream left conference that was no doubt organized weeks if not months ago to put OccupyWallStreet forward as if it was their lead act is awfully disingenuous. I hope the organizers are smart enough to come out of this transparent effort at co-option as the users rather than the used.

By Mark Provost, economic journalist focused on US income and wealth inequality living in Manchester, New Hampshire. You can reach him at gregsplacenh (at) gmail.com

My interpretation of the previous two days as a participant and journalist in Occupy Boston does not reflect the views of other members of the “99 percent” movement, or Occupy Boston as a whole.

The $64 trillion dollar question, “When will Americans hit the streets like people in other countries?” has been answered. Over the last several days, occupations have spread from Wall St., and erupted in more than 50 cities across America. The “99 percent” are rising to voice their grievances against an economic and political system which has disenfranchised them for too long. We share painful stories and common concerns, and want profound changes to how this country is governed—and for whom it is governed.

I drove from New Hampshire Friday afternoon and arrived in Beantown to kickoff Occupy Boston. Dewey Square, the site of the occupation in the heart of the financial district, was easy to find thanks to police and media helicopters hovering overhead. But rush hour traffic and Boston’s circuitous one-way streets channeled me far from the site, to an expensive garage.

I asked a well-dressed young man exiting work for directions to the park. He didn’t know the location, and I didn’t tell him why I was going (fearing he may intentionally misdirect me). Unfortunately, my cover was blown when ‘Brian’ asked a coworker for the whereabouts. Brian pointed me in the direction of South Station and offered his opinion, “I work for an investment bank. I am a capitalist…but I don’t agree with American-style capitalism.” Without pause, he refined his thoughts, “I am a socialist.” I was running late, so I simply nodded. He repeated this heresy, and wished me luck.

Earlier Friday, a huge demonstration organized by ‘Right the City’ protested in front of Bank of America, demanding a moratorium on foreclosures and continued their march to Dewey Square. Most of protestors went home, but some stayed to help launch Occupy Boston. I met the acquaintance of three young men from Stoneham, one of whom just lost his job as an eyeglass technician. Luckily his friend, a marine biologist with $60,000 in student debt, just landed a job. “We switched places” they realized, and gave each other a high five. Gatherers mostly engaged in small groups without direction, waiting for something to happen.

The confusion subsided and we got down to business. The group began to communicate using the famed ‘people’s microphone’. When someone calls for a ‘mic check’, the whole group repeats their message in short sentences. We organized into seven separate teams: tactical, direct action, legal aid, food & medical, media, local outreach, and creative artists. Soon, Dewey Square was a rain-soaked and muddy experiment in direct democracy.

Our strength swelled to over 1,000 people. (4) Ages ranged from 7 to 77, men and women, middle class and homeless, gay and straight, bisexual and transgender, anti-war activists and Marine Corps veterans, African Americans and immigrants, Arab and Jewish, Asians and Latinos, unemployed and overworked, working class and Ivy-League educated. We are committed to an innovative, democratic process which is a testament of our vision. The late Howard Zinn believed that the hallmark of a successful social movement is its ability to cultivate both democratic means and democratic objectives. One reinforces the other.

This is a leaderless movement without a central ideology. We are bound only by the understanding that we are part of the 99% of Americans getting shafted by the top 1%.

After we built our encampment and ate a hot meal, roughly 400 occupants hit the streets at 11:00 PM and declared our galvanizing message: “We are the 99 percent! We are the 99 percent! You are the 99 percent!” Countless cars honked in support, loaded Bostonians and passers-by cheered (and a couple jeers), some joined the march, while others grabbed smartphones and cameras to record the rebirth of America in the city that started it all more than 200 years ago. The 99% movement has been ignored and derided in the mainstream press—yet the overwhelming response from the people of Boston is revitalizing. If you join the movement, you will not be stigmatized. On the contrary, your dedication will be praised, honored, and thanked by fellow citizens. One by one, we will break the silence which has devoured this country.

Owing to the gravitational pull of truth-telling, the march returned to camp larger than when it departed. Suddenly, Dewey Park emptied as hundreds of us charged across State St. towards the Federal Reserve Bank of Boston. We chanted “We are the 99%, You are the 99%” (pointing to the phalanx of police officers lining the front of the building) and “F*** the Fed!” The roar echoed from the thick glass walls and stone ground. It was tense, but officers remained disciplined while demonstrators played music, sang, and danced.

Unlike other cities like New York and San Francisco, the BPD has made no attempt to corral us, has not tried to block or channel our marches, has not tried to disperse us, and has entered the encampment once due to a medical emergency. So far, hats off to the BPD. If they respect our right to protest, it makes it easier for us to protect their right to collectively bargain.

By 1:00 AM, it was pouring rain and I told my new friend Murph that I would drive him home to Watertown in exchange for his help finding my vehicle. I returned to New Hampshire, caught five hours of sleep, filled my car with supplies, and headed back to the occupation.

So far, the media has largely ignored the 99 percent movement. A nationwide uprising focused on addressing extreme economic and political inequality is just not newsworthy. Journalists claim that we lack coherence, and ask in a quixotic tone, “Why are they protesting?” Have they not read their own articles or watched their own television reports. Each one of us knows why we are here, and we want to listen to everyone’s ideas. We are a multitude—and we are occupying Boston for a multitude of reasons.

The more relevant question is: Will you join us and contribute to the awakening? (7)

Update 2:00 AM: Lambert Strether has just posted that the police have sent out a notice that OccupyWallStreet can no longer use Zuccotti Park in Manhattan. Clearly they’ve become too successful and must be denied a base camp. This is gonna get interesting, and I am sure the officials hope it will be in a way that discredits OccupyWallStreet.

The notice does not state who it’s from. Authorship unknown. So it may just mean nothing at all or it may be a bluff. But waiting to find out may be too late to get back into the park.

THESE FOLKS NEED A LAWYER WHO CAN BRING AN INJUNCTION AGAINST THE POLICE AND/OR BROOKFIELD PROPERTIES ON SAY INFRINGMENT OF FIRST AMENDMENT GROUNDS.

If this threat is real, one has to strike in court before the police or Brookfield sweep them away. Because once they are swept from the park they aren’t coming back for a long time.

The crucial thing is standing. The attorney must represent someone who is there whose rights are being infringed. So such a person or persons must be found.

This is a private park but one whose history seems to be that it was erected under the 1961 zoning regs ( that still needs verifcation) Those regs allows an owner to add additional stories to the building if they maintained an open space for the use of the public. So while it is a a privately owned park it still acts just like a public park, it is meant to be used by the public. So First Amendment issues should apply.