My last pop at New Zealand’s regulatory set-up mentioned New Image International, the company that uses multi-level marketing techniques to sell Colostrum as a miracle cure. The New Image product pitch is a generic hoax, as explained last time out:

Claims based on patient testimonials. Patients want to believe so much that a treatment is helping them that they can convince themselves that it has. They may even have experienced some recovery unrelated to the treatment. Unless there has been carefully evaluated clinical research it is very difficult to know what is a true effect of the treatment and what you can expect.

Multiple diseases treated with the same cells. Unless the diseases are related, such as all being diseases of the blood, different diseases, such as Parkinson’s disease and heart disease, would be expected to have very different treatments. Also, you want to be treated by a doctor that is a specialist in your disease.

Zooming in on the right hand bottom corner of New Image’s web site, we find both warning signs straight away: multiple diseases treated with colostrum, plus client testimonials. By way of unexpected bonus horror, they are most unfortunately juxtaposed with an endorsement from the New Zealand Science Minister: 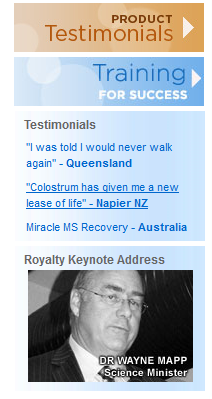 And if you click on the image of Dr Wayne Mapp, you land here, and yes, that really is the NZ science minister endorsing New Image. So there he sits, prating away, just under a whole bunch of testimonials unscientifically ascribing all manner of different miracle cure powers to colostrum.

…an area that’s poorly researched, often because these therapies are rarely suited to traditional research techniques. There isn’t much evidence to show how effective or safe medicines are.

Many studies only include a few people, or aren’t conclusive. If a therapy is found definitively to work, it might no longer be known as complementary or alternative, and join mainstream medicine as a proven treatment.

However, many people who use CAMs say that they make them feel better, so it’s often a case of weighing up things like:

…
Watch out for products that make big promises, cost a lot, say they are scientifically proven or can ‘cure MS’. Paying for these treatments or therapies can be a waste of money and leave you disappointed, or perhaps even make things worse.

And then, we have this site, http://www.newimageaustralia.co.nz/Links.html, which looks as if it’s a New Image site, except that its livery and logo is all wrong, and anyway the proper New Image Australia has contact details that are actually in Australia.

And then, trim the “links” part off the spurious New Image site and you are redirected to http://www.colostrum-immunity.com/, which is in our list above, and has the same look’n’feel as the Adult Stem Cell Foundation‘s site: same designer (same client?).

And if they do realise it, and care, what are they, and the NZ authorities, going to do about it, exactly? This was how the the NZ Herald’s reported Commerce Minister Simon Power’s response to the outbreak of overseas financial fraud that exploited  New Zealand’s lax and outdated company law: “NZ unable to help international agencies combat fraud: Simon Power“. I wonder if NZ will suddenly rediscover that ability, if it turns out that the boot is on the other foot, and they are depending on Oz to combat fraudulent misuse of New Image’s marketing.

Which explains why you don’t want your Science Minister running around puffing fake cures, and why a spot of international fraud-fighting cooperation is a good idea. You can save all sorts of embarrassment.