I’ve deliberately waited a bit before examining the remark of one Jason Barker, an employee of the New York Fed, on a New York Post article that ran the day after the November 17 Occupy Wall Street protests. My initial negative reaction to his comment still holds.

The Post piece itself presented itself as a celebration of police bloodlust, but it was actually more nuanced and fairminded than you’d expect. Its headline screamed, “Ready riot cops whack back at OWS hooligans.” And the “whack” part is an understatement. Anyone who is concerned about the rise of police state tactics and the use of undue force would be put off by the conduct described in the article. This is how it starts:

It was a blur of batons, beatings and blood.

Police in riot gear answered the Occupy Wall Street mobilization with a display of force that overwhelmed protesters everywhere they gathered.

“I saw somebody kick the [barricade] — and all of a sudden the police kicked in and cracked his head,” a protester named Tim, 20, said after witnessing a Zuccotti Park confrontation that left a comrade bleeding profusely before he was hauled off to a police van.

“They were stepping on his face . . . They were hitting with batons. They bum-rushed him and tackled him and slammed his head down,” said the bystander. “One put his foot on the guy’s head.”

The article fails to mention that the crowd was estimated at 32,000 by the city and 40,000 by Occupy Wall Street. It’s hard to believe the police “overwhelmed” the protestors at all points given the size of the turnout. But this is the sort of “resistance is futile” message we’ve also noted in the New York Times accounts of the demonstrations.

In another Zuccotti showdown, cops chased a male protester into the park. They pushed him into a flower bed. He was stomped, and his head hit the concrete edge.

He left behind a pool of blood and a boot.

“I was screaming, ‘Be peaceful, be peaceful,’ ” said Seana, 38. “And then they [police] rammed. They pushed me down, and I fell backwards — and they just kept coming at us.

“It was completely intentional; they were trying to start a riot.”

The entire article continues in this vein. Despite the drive by shooting of OWS in the headline, the Post describes police violence in gory detail and has quite a few quotes from demonstrators saying how unwarranted it was. The only incident depicted where the framing could lead a reader to think the Occupiers had brought the reaction on themselves is:

Chaos erupted again at around 11 a.m., when demonstrators took down police barricades.

Streaming into the park, protesters grabbed a metal barricade and started dragging it, screaming, “Whose fences? Our fences!”

Bottom line: the story gives a pretty graphic account of acts police brutality, and for the most part, presents the Occupiers as peaceful protestors, not aggressors.

This is the first of 69 comments on the article:

Yes, this is the name of a real New York Fed employee. I’ve called the New York Fed and there is a Jason Barker working there. It seems unlikely that a third party would make use of the name and Facebook profile (the NY Post comment links to Facebook) of a junior Fed staffer. See his Linkedin profile: 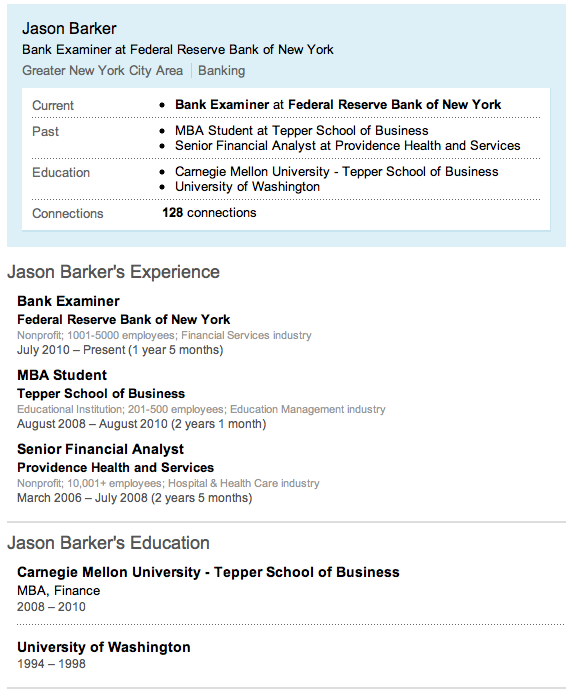 Now you might say it is unfair to draw conclusions from public snippets, but these in fact are all what Barker has chosen to present about himself, not some out-of-context, overheard remark. And they not only say interesting things about Barker, but also about the New York Fed.

Note that Barker went to a third tier business school yet managed to land a job at the New York Fed when unemployment among recent graduates is at record highs. And that is curious. While the image of the Fed is that of a bastion of white male privilege, that is more true of the Board of Governors than the New York Fed. Under pressure from Fed nemesis Representative Henry Gonzalez, Greenspan answered a query in 1993 on the background of Board of Governors’ staff making more than $125,000 a year. Out of nearly 2000 employees, there was one woman and one minority group member in that tier. Goldman’s investment banking division in 1981 scored better on diversity than the Board of Governors did more than a decade later.

The New York Fed, by contrast, has been far more ethnically diverse, but don’t mistake that for intellectually diverse. One staffer who worked in multiple policy areas at the New York Fed the early 1980s said all the second tier leaders in his areas were women, which was rare in business, let alone financial services, in those days. However, the New York Fed places a great premium on academic credentials. That does not mean simply “good schools” but someone who is or could be on the tenure track. There is a lack of appreciation that what it takes to be a good academic and a good policy maker are often two different things (for instance, Arthur Burns, who was an accomplished scholar, made for a lousy Fed chairman).

Bank supervision, where Barker works, is not where the hot shots go. The prestigious staff roles relate to the central banking functions: economic research, macro modeling, and of course, monetary policy. PhD monetary economists rule the roost. And there is considerable group think. The organization is very vertical, with little lateral hiring except at the very top levels. The result is intellectual inbreeding. I’m told the public rejection of perspectives that ruffled the Fed’s world view, such as Robert Shiller being pushed off the the New York Fed’s economic advisory board after he suggested that there was a housing bubble pre crisis and the dressing down of Raghuram Rajan at Jackson Hole in 2005 is consistent with an internal posture of ignoring people who don’t fall in with the party line.

Having said that, the New York Fed has been trying off and on to improve its bank oversight functions. A contact wrote:

Years ago bank supervision was run by a male Irish mafia and in many ways it was a backwater. It is no longer the case even as the size and prestige of Bank Sup has fluctuated as crises have ebbed and flowed. It is not stocked top to bottom with Ph.D.s but there some very good people their including people who were rotated in from the Markets Group and Research. Recently they have successful in hiring people laid-off by the Street. Hopefully these people will bring a new mind set and insight in to the Street mind set.

So let’s return to Barker. He can’t even spell “hippie” correctly. He’s presumably a libertarian (the anti-immigration and “53%” identifiers are tells). Libertarians profess to be against the coercive use of state power, yet Barker eagerly advocates inflicting severe injuries onto protestors with no due process. So he looks to be an authoritarian and a hypocrite.

But let’s go further. His job as a bank examiner means that he is tasked with gathering information, making interpretations, and enforcing laws and regulations. Yet his remarks and his Facebook page reveal he’s not at all well suited to that sort of task. The “We are the 53%” is propaganda meant to suggest that the Occupiers are unemployed non-taxpayers, when unemployment rates among the protestors are lower than among Tea Partiers. Similarly, I know quite a few people (investors, hedgies, well off retirees) who make a lot more than Barker does who also support OWS.

The most damning bit, of course, is that Barker advocates police brutality and seems unwilling to consider that any issues regarding public safety (which have been asserted far more than proven) still need to be weighed against considerations of due process and First Amendment rights. The city clearly was not even remotely interested in public safety. If their concerns really did relate to the conditions in the park, they would have allowed OWS to rent port-a-potties, and would have negotiated or set forth minimum conditions for continued overnight presence (say, expulsion of anyone found using drugs, weekly cleanings of the park, and leaving 1/4 completely free for use of the locals). The eviction was clearly to quash an annoyance to the powerful.

The interesting question is why a new employee like Barker would make a provocative remark in a public place in his own name. Possibility one is that simply he has terrible judgment and is foolishly putting his career at risk. His comment appears to run afoul of the New York Fed Code of Conduct:

Query whether advocating violence by the police, which shows a disregard for due process and will be presumed to reflect a bias in favor of powerful interests against those of frustrated, disenfranchised citizens, is an appropriate posture for someone involved in bank regulation.

Possibility two is that he judged correctly that his bloodthirsty views were widely shared at the New York Fed and there would be no negative repercussions. I suspect the latter.

Earlier in this thread, I suggested that bank examiners ought to examine banks, which means assess the caliber of their operations and management and determine whether they are in compliance with the laws and regulations. But we discussed repeatedly in the runup to the financial crisis that the Fed was not terribly interested in supervising financial firms. It stopped examining primary dealers in 1992. It failed to enforce the Home Ownership and Equity Protection Act, which mandated supervision of and restrictions on high cost mortgage lenders. Even the bank friendly Office of the Comptroller was more serious about HOEPA than the Fed.

Similarly, I met a Fed officer in the Fed’s Regulation and Supervision division in the spring of 2007, and he simply refused to consider that originator fraud existed (and since he helped brief Roger Cole before met with the Senate Banking Committee in April 2007 to defend the Fed’s conduct regarding subprime lending, there was good reason to think his views were representative of those held within the central bank). Not surprisingly, pro-bank, anti-borrower sentiments appear to be widely held within the Fed. Colleagues who’ve met with Fed staffers to discuss the mortgage market have reported that they are firm believers that strategic defaults are common (when, as we’ve discussed, the studies on them are embarrassingly bad) and are outraged at the idea that people are not paying their mortgages (have they not heard of job losses and medical bankruptcies, or has it not occurred to them that defaulting six months before you hit the wall, so you have enough cash to move and put down a deposit on a rental, is something a financial planner would recommend?). Even though the New York Fed is trying to improve its regulatory staff, it is looking to the industry for “talent”. That’s unlikely to challenge the existing world view.

So Barker has made some underlying truths blindingly obvious. The central bank doesn’t want independent thinkers who actually might know something about banking as regulators; it apparently wants staffers who are unabashedly pro bank and will follow simple-minded formulas regardless of whether they have anything to do with the law. Jason, who is dumb enough to identify himself as one of a 53%, is in fact a willing tool of the 1%, to be discarded when he is no longer of any use to them. In some ways, these foot soldiers of corruption are more contemptible than the higher ups, for they’ve sold what little integrity they ever had for for promises and crumbs.