I tend to avoid the year end retrospective/forecast blizzard, although some of the more creative compilations can be fun.

However, some 2012 forecasts crossed my screen, and two were such striking outliers that I thought I’d call them to your attention and seeing if readers have come across other Extreme Predictions for the new year (aside from the Mayan end of the world sort).

The first come from Matt Yglesias, “Happy Days Are Here Again! Don’t believe the naysayers: An economic recovery is right around the corner.” No, this is not a parody, this is a real article. And whoever came up with the title at Slate has a subversive sense of humor. The song, “Happy Days are Here Again,” was an end-of-Roaring 20s confection (published and first recorded in 1929), and made famous in a 1930s movie and as the theme song for FDR’s 1932 presidential campaign. Needless to say, happy days (at least on the material front) proved to be far more remote than that standard promised.

Yglesias’s argument is (basically) that with interest rates super low, consumers will start “investing” again in cars, durable goods and housing. He relies on the idea of the natural rate of interest of Knut Wicksell. Yglesias claims it is “so fundamental that people sometimes forget to return to it.” Huh? This is the old loanable funds theory; it has been debunked repeatedly, recently and rather decisively debunked in an critically important BIS paper earlier this year by Claudio Borio (who with William White of the BIS called the international housing bubble in 2003) and Piti Disyatat. This paper makes an key conceptual contribution to economics yet does not seem to have gotten the attention it deserves (certainly not in the econoblogsophere, no doubt because it is too threatening to orthodox ideas).

He ignores the overhang of unsold properties and shadow inventory (we have a post from Michael Olenick on that tomorrow that suggests it may be much larger than most people think), or what Calculated Risk calls “the distressing gap.” 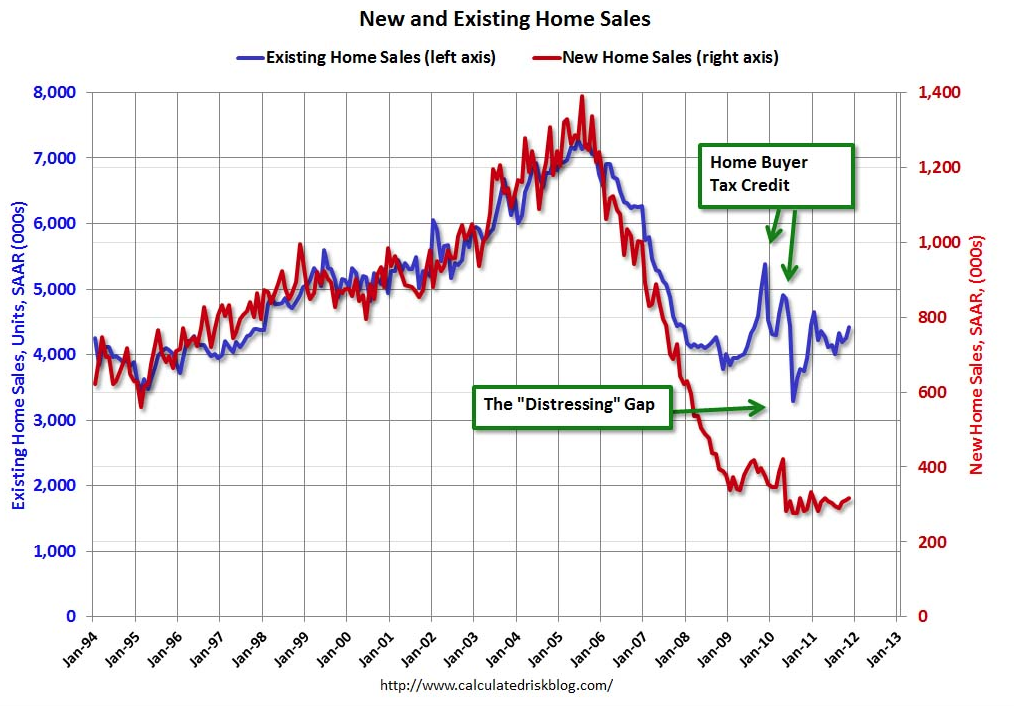 I expect this gap to eventually close once the number of distressed sales starts to decline.

Let’s put this more simply: Japan has had 20 years of super low interest rates, and banks competing so desperately to lend to corporations that credit spreads are razor thin. People and businesses are not going to borrow and invest if they are not confident of their future. With short job tenures, over 30 years of stagnant real worker wages (and falling in the most recent 12 months), exactly what is there for the bulk of the population to be optimistic about?

We’ve had a very successful three decade effort to break the bargaining power of labor, and covered that up with rising consumer debt levels. That paradigm is over, but no one in authority seems willing to go back to an economic model where rising worker wages drive economic growth. Until we get policies that address that issue, I don’t see a reason to be expect robust growth levels.

On the other end of the spectrum, Max Gardener, a bankruptcy lawyer better known as the informal leader of a large group of effective foreclosure defense attorneys, has published his predictions for 2012. He manages to be more pessimistic than I am (well actually, I find his forecast for unemployment a bit cheerier than mine).

Admittedly, his ones on housing are realistic, which makes them sobering, For instance:

Home Values: Home values will continue to decline during 2012 and I do not expect the bottom of the real estate market to be reached until the 3rd Quarter of 2014. My best guess for any type of sustained recovery in the housing market is no sooner than the 3rd Quarter of 2021. The number of homes in foreclosure will double or triple from 2011 levels and home values will drop by another 15% to 20% by the end of year. I do not expect to see any real recovery in the housing market until at least 2022. A massive number of bank-owned homes (Real Estate Owned or REO property) will be turned into rental properties by the banks and/or mortgage servicers and many more foreclosed on homes will be sold in bulk sales to investors for the same purpose.

And we have this:

Nuclear Nightmares: Early in the New Year, Israel, with technical and logistical support from the United States, will launch a major military strike on all Iranian nuclear facilities and Iran will respond by deploying massive world-wide terrorist attacks and will engage in efforts to cut off all sea routes for the shipment of oil from the Gulf Region. The uncertainty of all out war with US troops on the ground will be present throughout the year and active US military intervention is at least a 50-50 bet.

Steve Hansen, who did well with his 2011 forecast, wisely choses to duck this year as much as he can (2012 Predictions: Just a Dice Roll). But I have to believe that readers know of other pundits who have made Extreme Predictions. Which are your favorites?