By Michael Olenick, founder and CEO of Legalprise, and creator of FindtheFraud, a crowd sourced foreclosure document review system (still in alpha). You can follow him on Twitter at @michael_olenick

Fallout continues from the ProPublica/NPR story “Freddie Mac Bets Against American Homeowners,” though probably not the sort ProPublica expected.

Many in the blogsphere who work on finance and housing finance issues, including myself and Yves Smith, didn’t find the piece to be convincing. In a rebuttal Yves, who like me is anything but a cheerleader for the GSEs, explained Freddie’s practice is, in reality, only slightly more nefarious than clearing snow from the parking lot. That is, of all the awful decisions Freddie Mac makes, this isn’t one of them.

ProPublica co-author Jesse Eisinger replied to Yves’ critique in the comment section. I e-mailed Yves about Jesse’s remarks and she suggested I flesh my observations out into a post.

To recap: Freddie Mac purchases and bundles mortgages, bundles those mortgages into pools of mortgages, then sells the expected mortgage payments to investors in the form of bond-like securities.

Securitization is a vital component of the modern mortgage market, or most other credit markets for that matter, since the process frees up capital that can then be used to make more mortgages.

In late 2010 Freddie Mac, according to the ProPublica story, started to retain a greater number of “inverse floaters,” an instrument created when mortgage pools are turned into collateralized mortgage obligations. As Yves pointed out, even though this portion is typically hard to sell and is thus often retained by the originator, it often makes more sense to use a CMO to create more conventional-looking bonds that can be sold to investors at better prices and retain inverse floater because it results in lower interest rates than if they sold a simple mortgage pass through. The GSEs have a mandate to provide more affordable loans to homeowners and better results to taxpayers, so lowering the cost of mortgage funding is consistent with those objectives. It is true that inverse floaters benefit when borrowers don’t refi, but as Yves pointed out, the GSEs engage in very complex interest rate hedging strategies. Looking at this position by itself tells you nothing about Freddie’s overall interest rate bets.

ProPublica tried to argue that an increase starting in 2010-2011 versus 2008-2009 in the number of deals where the inverse floaters were retained was a sign of Freddie positioning itself to bet against homeowners. The authors apparently failed to look at Freddie’s CMO issuance during this period. Its CMO issuance rose, and so it appears that much, perhaps all, of the increase in retention was due to an increase in mortgage funding by Freddie (see the bottom blue bars in the left hand chart): 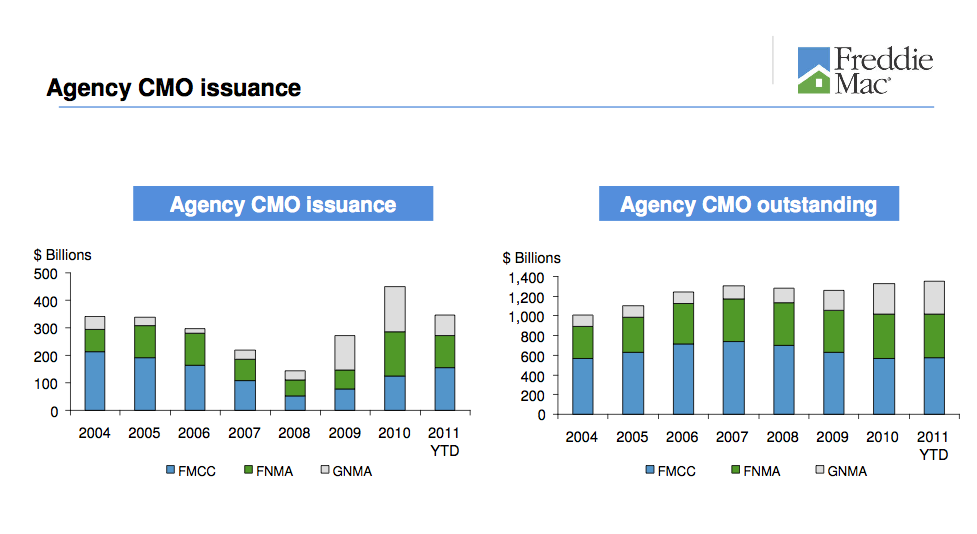 Moreover, the inverse floater is the portion of the CMO that is most exposed to prepayment risk. Given the uncertainty about government intervention in the mortgage market, investors in both straight passthroughs and in CMOs would be more leery than usual of taking prepayment risk. To put it in trader-speak, as readers have, this is a “long vol” bet, and if investors were unwilling to buy volatility (as in vol was unusually cheap), it would make even more sense to retain it.

Yet ProPublica contended that Freddie Mac’s use of inverse floaters represented a conflict of interest because the GSE would lose money from the hedges if borrowers refinanced to lower interest mortgages. They implied Freddie could abuse its influence in the housing market to prevent lower-interest refinancing programs, which are better for borrowers.

I’ll summarize Jesse’s comments, which I verified did come from him:

• Freddie’s retention of inverse floaters increased in 2010 then came to an abrupt half in 2011, making it appear that the FHFA, which oversees Freddie, told them to knock off which is a tacit acknowledgment the government-owned organization should not profit by trapping people in higher-interest mortgages.

• There exists less complicated and less expensive ways to hedge the interest rate risk. Jesse quoted a trader who summarized “.. comparing inverse floaters to hedging tools is not just apples and oranges — it’s more like apples and cars. They just have nothing to do with each other.”

• Retaining the interest-only streams runs contrary to Freddie’s mandate to decrease their portfolio.

I have to point out that Jesse misrepresented Yves’ argument. She never said the inverse floaters were a hedge; she said you can’t tell what bets Freddie is making unless you look at all their positions, since the GSEs do a great deal of interest rate hedging. The wager represented by the inverse floater may well have been partially or fully offset by other positions.

Since the story surfaced, the FHFA released a statement clarifying that the inverse floaters make up about $5 billion of Freddie’s $650 billion portfolio.

My own analysis is that the argument that Freddie didn’t bet against the American homeowner. There’s just too much direct and indirect evidence supporting they simply made a decision that was, in hindsight, politically bone-headed albeit fiscally benign.

Every quarter the Office of the Comptroller of the Currency (OCC) releases a study detailing loss mitigation options, including modifications, for mortgages. Their latest study was release for Q3, 2011. They break modification options down into several buckets, including capitalization, interest rate reduction, interest rate freeze, term extension, principal reduction, principal deferral, and “not reported” (the servicer cannot contractually explain what modification term they offered).

Freddie regularly freezes and lowers interest rates in modifications. Since Freddie refuses to engage in principal reduction, it makes no sense they’d neuter one of the favorite tools in their modification arsenal by betting against it.

Fannie and Freddie are vigilant, almost to the point or paranoia, about strategic defaults: making bets to trap people in high-interest mortgages makes strategic default more likely. The Mortgage Bankers Association commissioned a study about strategic defaults, comparing them to a disease. That is, strategic defaults, they argued, are contagious across borrowers. Their solution, faster foreclosures to stem strategic defaults, appears nonsensical. But the underlying theory, that if one neighbor sees another move down the street into the same model home for half the rent that the second neighbor will do the same, does not appear far-fetched. Getting back to the issue at hand, it just doesn’t make sense that Freddie Mac, for some short-term trading gains, would risk spreading a “disease” that puts the entire portfolio at risk.

Freddie doesn’t have enough influence over borrower interest rates to believe they could rig the entire market. There’s nothing except the fiscal/monetary policy firewall stopping the Federal Reserve from offering to buy bundled refinanced performing GSE mortgages. By offering to pay a premium they could reduce interest rates and justify enough cash-flow for some limited principal reduction.

In normal times that firewall would prove impossible to breach, but these are anything but normal times. Arguing that the Fed is banned from engaging in this type of relief would be akin to a mother of four arguing she needs to preserve her virginity.

If that happened, and it does not seem far-fetched, Freddie or Fannie would have no say about the matter. People would go to a private lender, who would sell their loans on a private secondary mortgage market, and quickly flip the pooled securities to the Fed. This policy would quickly enable the refi’s, reduce the GSE’s portfolio, and might reignite the private secondary mortgage market.

Freddie surely recognized this risk and wouldn’t be foolish enough to bet against it happening in a major way.

Freddie acts stupid, not suicidal. Freddie is already a political pariah. In modern American discourse there are few areas of consensus on any subject between the political right, left, and center, or between various economists and businesspeople, except that Freddie Mac and Fannie Mae are awful.

Debates typically center around how much they suck, but nobody argues they’re welcome additions to the US business climate. Literally nobody except maybe Newt Gingrich likes these organizations.

Freddie surely would not be so stupid as to overtly bet against American homeowners in this environment. Conversely, once they realized their hedging strategies could be perceived as exactly that they quickly stopped using that strategy, which is why the use of inverse floaters came to an abrupt end.

ProPublica has an established reputation. But sometimes even the best bomb.

It’d be legitimate to question why, say, Fannie and Freddie have a higher 12-month re-default rates than private market modifications over recent years, despite having substantially lower-risk borrowers. An investigative series about their central role in the foreclosure fraud crisis — their reckless policies and practices set the stage for our current fraud-fest — would be welcome and bruising. It’s arguably harder to find something that the GSE’s do right than something they do wrong.

Maybe ProPublica is a victim of its own success. This story about inverse floaters is the inverse of what we’ve come to expect and what the economy requires if we’re ever going to substantively recover: fact-based reporting on serious but solvable real problems.