What Does the CCAR Really Tell Us About the Big 4 Commercial Banks?

It has been just over 36 hours since the release of the 2012 CCAR (the “stress test”) of 19 banks. Market response has been decidedly positive with respect to the three of the four top banks that passed, the bloom has somewhat come off the rose with respect to some regional banks, and Citigroup has, well, wilted.

But there is much more in the stress test than is found in the headlines and in media reports, so we thought we’d hunker down with the report yesterday and, after some overall review, focus more on the top four bank holding companies, Bank of America, Citigroup, J.P. Morgan Chase and Wells Fargo – to see what further conclusions might be drawn. After all, those four banks comprise 68% of all the activity in the CCAR.

First off, let’s start with what the stress test is, and what it is not.

The CCAR is a test of the banks’ ability to see themselves through a 25 month devastating economic and financial crisis without experiencing a fall in Tier 1 Common Capital (and other ratios, but this is the one most people care about) to below 5% of assets.

The CCAR is NOT a solvency test of the banks, or bank assets, on a marked-to-market basis. It does not purport to claim that the carrying values of the banks’ existing hold-to-maturity (HTM) assets are money good today relative to the market value thereof. Nor does it address what would happen to the operating results of the banks after the aforementioned 25 month period. It explicitly assumes a downturn followed by a period of recovery thereafter – not an unreasonable assumption – but it does not continue to “clock” (or present value) likely losses to assets that would be recognized after the projection period.

The foregoing is an important point to understand, so an example is called for. If, as the CCAR hypothesizes, housing was to fall 21% from Q3 2011 levels and stay near or close to those levels (as it has since it fell 33% from 2006 peak levels), the losses after the projection period to banks’ portfolios of residential mortgage loans could be far more extensive than those set forth in the CCAR.

The CCAR, however, does open a very useful window on the degree of expected performance of the 19 banks’ HTM portfolio loans, on a bank-by-bank basis, and permits conclusions to be drawn with regard to the levels appropriateness of current (Q3 2011) carrying values for those assets, net of existing provisions for losses assessed by each institution. This report, accordingly, includes a comparison of the foregoing information with respect to the top four banks (and the others, of course) and the results may surprise some folks who have only looked at the headlines.

In fact, the extent of the losses in the HTM portfolio, on a relative basis (bank to bank) is a reasonable test of the adequacy of loss provisions already taken by the banks (thus reducing additional provisions required during the projection period). For example, in real estate-related loans – some 45% of the top four banks’ HTM assets – we believe the CCAR demonstrates that one bank that is generally regarded as a “safe” has perhaps been less than forthright about the quality of that category of assets from the standpoint of adequately provisioning for future losses.

With that out of the way, let’s get to some specifics:

Against these losses, the CCAR assumes that banks will earn, during the projection period, a total of $294 billion in pre-provision net revenue (PPNR) to partially offset the effects of the losses. It is, however, important to note that the PPNR has been reduced by $115 billion of operational risk event losses (lawsuits, systems failures), so that the total “damage” that results from the Fed’s disaster scenario of actually $649 billion.

Of the PPNR and the projected losses, the following is attributable to the top four banks:

It is pretty clear why Citigroup took it on the chin in this study. But stay tuned, there is more under the hood.

It has been well publicized that the breakpoint for failure of the CCAR is any stressed minimum capital ratio that falls below 5% during the projection period (using the banks’ proposed capital plans submitted as part of the study). While four institutions failed that test – including one of the top four, Citi – there are a number of others that exceeded the minimum threshold by only tenths of a point.

Those under 5.5%, but above 5.0%, on Tier 1 Common Capital (after their proposed capital plans) include some pretty hefty names:

MetLife (which failed on other counts)

Of course, one needs to draw the line somewhere, but there is a certain relativity to who has a “fortress balance sheet” and who does not.

Which brings us to our final, and most important, point:

Ultimately, the eventual stability and strength of each bank and the banking system is derived from the quality of bank assets (chiefly, the ability to actually collect amounts lent out on the HTM side of things) and the equity capital available to plug any shortfall. A rolling “going concern” analysis, such as the CCAR (which will now be a regular element of bank regulation in the U.S., under Dodd Frank), is very important. But after a period of severe dislocation, such as the credit bubble and its aftermath, it is appropriate to take a closer look at legacy assets (those originated during the credit bubble – as most HTM assets in fact were) on a class-by-class basis.

The banks that look healthier on a headline basis often do not look quite as robust relative to the losses they would likely see on individual classes of assets. Furthermore, certain asset classes – such as real estate loans – are liable to collection problems that may remain unresolved because of a more or less permanent (or at least long-term) reset in property values.

Fortunately the CCAR does give us some guidance in the foregoing respect. What we have done on the following page is to reflect the winners and losers among the top four banks in the CCAR on an asset class basis with respect to their HTM portfolios. We picked as “losers” two of the four banks that had the most losses in each class during the CCAR projection period by either dollar amount or by percentage of total assets of that class. They are highlighted in yellow. The results, as we noted above – particularly with regard to real estate loans – may come as no surprise to some and a big surprise to many. Especially when considered in light of the future collectability of those assets after the projection period – should even far less adverse circumstances prevail.

Please turn the page and draw your own conclusions (and beware the ides of March): 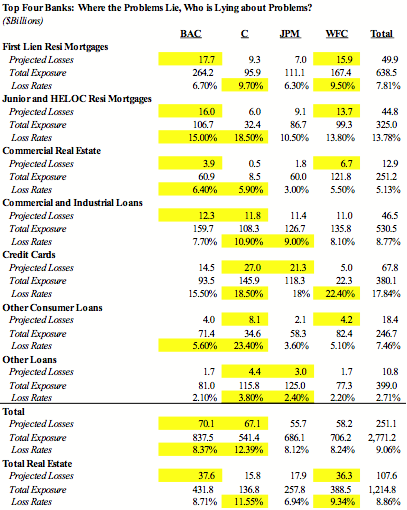