Anyone who has been following my European commentary for any length of time will know that I have been running a number of risk themes on Europe due to what I consider to be misguided and one-sided policy which will ultimately be counterproductive.

These themes come under the major trend that I see in the Eurozone:

This analysis is based on the sectoral view of the European periphery which I explained on Monday in a discussion of the Australian economy:

As we have seen from nations like Greece and Portugal, a country with a long running current account deficit and a private sector with a desire – or no choice to save (austerity) – has significant problems trying to reach a government surplus. Once you understand that the external sector and the private sector are a net drain on national income it isn’t hard to see the problem. Under these circumstances there is simply no room left in the economy for savings in the government sector and attempts to reach government surpluses become counter-productive as this simply accelerates the decline.

If a country’s current account deficit is structural ( I’ll explain this later ) then these efforts are very dangerous because this can easily develop into a damaging feedback loop. The loss of income through the external sector leads to a loss of income in the private sector, this then drives the stronger desire to save, meaning government revenues fall further. This inevitably leads to calls for higher taxes, which once again drain income from the private sector … and around we go. The result of this dynamic is a rise in unemployment, therefore national production and income, meaning once again the government sectors revenue decline while private sector spending and investment fall further.

And the story is the same if you look at this from the perspective of national income. A country with a long running current account deficit has been borrowing goods and services from the rest of the world. In order to support this the non-external sectors of the economy will have expanding debt positions and due to this an economy structured around consumption over production. Because the external sector is a net drain on capital from the country, the government and/or private sector must continually expand their debt in order to maintain economic growth.

In many cases this debt accumulation leads to asset bubbles, because the expanding debt drives asset prices which attracts speculation and in doing so accelerates the external borrowing. This in turn drives up national income, which in turn drives higher prices and further speculation. If a sector’s debt is accumulating faster than its income then at some point in the future a limit will be reached and the rate of debt accumulation will fall. This leads to falling asset prices and national income, which ultimately leads to a crisis as accumulated debts start to sour.

This is what we have seen across the European periphery, although the debt has accumulated in different sectors of the economy across different countries. Ultimately, however, once a European country falls into crisis the debt has ended up in the government sector, even if it didn’t start there, because Europe has chosen to keep banks alive at all costs. This ideology, however, is the major issue with the “Austerity” plan.

After a financial crisis the private sector tends to have lost significant amounts of wealth which leads to both the loss of demand for, and ability to support new borrowing. The debts to the rest of the world still exist which tends to mean the external sector is still in deficit even with lower demand for imported goods. This means that in order for the nation’s income to remain at the previous level the government sector must go into deficit to offset the fall in private sector credit creation. If this does not occur then the economy will shrink until a new balance is found between the sectors, which basically means the economy will try to find equilibrium at some lower national income, and therefore GDP.

This is the sort of deflationary policy that Europe is endeavouring to implement in the European periphery. There is just one BIG problem. At a lower national income the country has no ability to service the debts that it accumulated on its previous income, yet that is what Europe expects to occur. This is simply delusional, because it is a mathematical impossibility and in trying to break these basic laws of arithmetic Europe is slowly destroying the economies of the European periphery which will, in turn, bring down the stronger economies.

Which brings me to last night’s Flash PMI data. 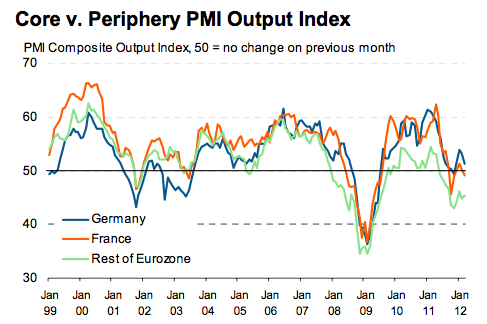 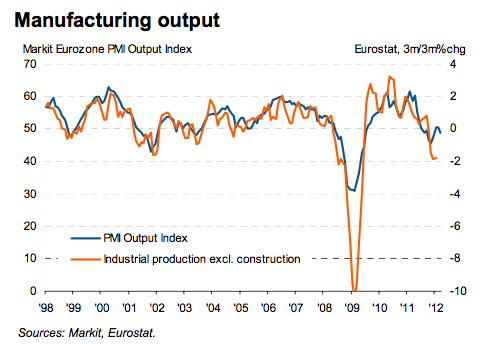 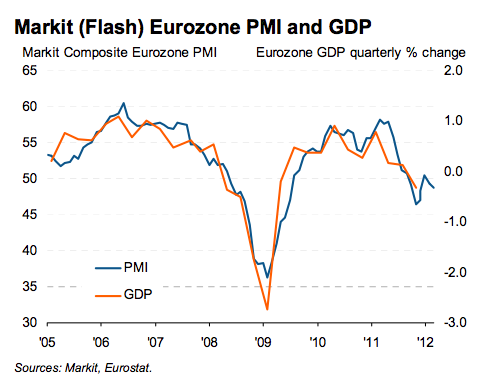 And so you can see that the major theme continues. Stemming from that major theme ,and associated analysis, I have had some major expectations.

This now appears to be occurring in ernest:

The gap widened to 799 million euros ($1.06 billion) from 274 million euros a year earlier, when the deficit had slumped by more than 70 percent, the finance ministry’s budget office said on Tuesday.

2. Spain was a large unrecognised problem that would return to the spot light:

The country has seen its yields tumble since December on the back of the ECB’s 3-year LTRO but there hasn’t been anything in the economic metrics of the country to support such action. Spain has 23% unemployment and still rising, the banking system is under-capitalised and still has unknown exposure to the country’s housing market collapse. On top of that the rising unemployment rates is pushing up bad loans in the banking system to 7.4%, a 17-year high, and they are still rising.

Since I made that statement bad loans have risen further, house prices have continued to fall and the government’s debt position has worsened.

3. Italy could grow out of its economic slump but was unlikely to owing to history, structure and demographics:

The real problem in Italy is that its economy has been stagnant for nearly the entire decade. According to the IMF, among all countries in the world between 2000-2010 Italy only grew faster than Haiti and Zimbabwe. In 2010, Italian GDP was only 2.5% higher than in 2000. This problem is actually made worse by the fact that this is such a long term trend. Italy’s per-capita GDP growth was 5.4% in the 1950s, 5.1% in the 1960s, 3.1% in the 1970s, 2.2% in the 1980s and 1.4% in the 1990s. Since the new millennium the country has hardly moved forward and if we extrapolate out that trend Italy will spend the next decade in contraction.

On top of stalling growth, Italy has a demographics issue. With a debt to GDP ratio at 120% along with a population with a median age of approximately 45 Italy really does look like the Japan of Europe. The only problem is Japan is competitive, runs a trade surplus and is sovereign in its own currency. Italy has none of these things.

The latest stats from Italy appear to show that the economy continues to weaken and GDP continues on its long running downward trend.

4. Although the ECB’s emergency response to the crisis may have averted the crisis in the short term, it is likely to lead to a zombification of the periphery banking system and therefore add to the downward pressure on periphery economies.

The jury is still out on this one because we need to wait for the ECB’s Quarterly bank lending survey to get the results. This was noted by FTAlphaville overnight:

The effectiveness of the LTROs, and other extraordinary operations of the ECB, can at the moment be judged by some metrics (and general sentiment) positively. However, it seems a bit rash to call them an “unquestionable” success until the liquidity is actually shown to improve bank funding markets, and ultimately land in the real economy.

So we will just have to wait and see on that one. Overnight we also saw news that Ireland, the strongest of the periphery in terms of export potential, fell back into recession due to falling trade volumes.

In total, it is fairly clear to me that Europe’s troubles are far from over because the area continues to meet my predictions. That, however, didn’t stop Mario Draghi from trying to convince the world otherwise:

European Central Bank President Mario Draghi has said the worst of the eurozone crisis is over. In an interview with Germany’s Bild newspaper, he said the situation in Europe was “stabilising”.

Mr Draghi also said that some economic data, including inflation and budget deficits, showed that Europe was doing better than the United States.

The European crisis and the associated delusional rolls on.