Perhaps the most obvious indicator that the US has become a society of debtors is the ever-expanding market for student loans. Recently clocked at $870 billion and rising quickly, this market has been a focal point for the recent Occupy movements. The White House knows that this is a key issue among potential voters and recently tried to provide some relief to debtors by placing a cap of 10% of discretionary income on the repayment of such loans – down from a previous cap of 15%. But of course placing a cap on how much needs to be repaid is hardly a solution to what appears to be a much larger problem.

Student loans are growing at a remarkable rate. Between the second and third quarter of 2011 they grew from an estimated $852m to an estimated $870 billion – that’s an increase of 2.1% in only one quarter; and this while other types of consumer debt either declined or remained flat. And even these estimates are pretty fuzzy because, as the New York Fed highlights, the market is highly complex and difficult to gauge:

Student loans support the education of millions of students nationwide, yet much is unknown about the student loan market. Relevant data are limited and, for the most part, anecdotal. Also, sources tend to focus on recent college graduates and do not reveal much information about the indebtedness of parents, graduate students, and those who drop out of school.

The rapid expansion of student debt appears to be due in large part to the increasing numbers of Americans enrolling in third-level (what Americans call “advanced”) education. This is not surprising given the slack and therefore highly competitive jobs market that doesn’t appear to be going away any time soon.

The market for student debt has also become remarkably complex. Again, the New York Fed gives us the details:

Unlike other types of household debt such as credit cards and auto loans, the student loan market is incredibly complex. Numerous players and institutions hold stakes at each level of the market, including federal and state governments, colleges and universities, financial institutions, students and their families, and numerous servicers and guarantee facilitators.

Unsurprisingly, the burden of this debt – at least, that which is counted – is falling on the shoulders of the young, as the chart below indicates. 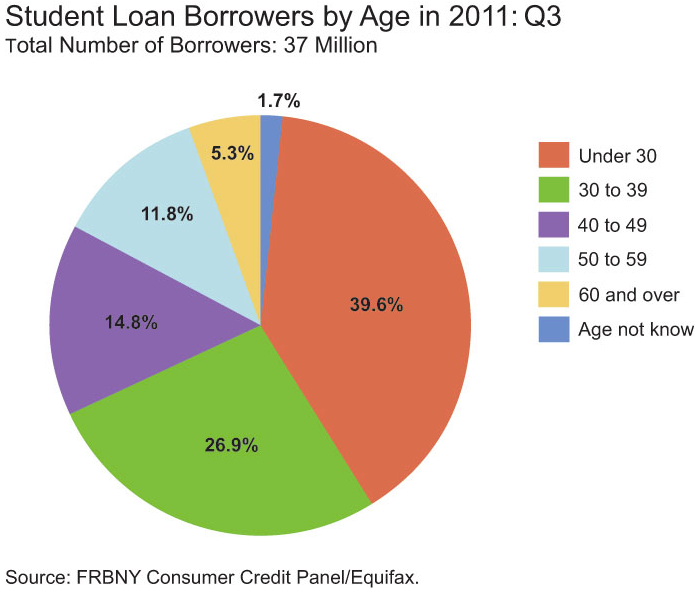 Delinquency rates are already high and appear to be rising. Previous calculations indicated that some 10% of those with student loans should be considered delinquent. But due to the complexity of the market this is probably far too conservative an estimate and recent calculations by the New York Fed indicate that the actual figure is probably closer to 21%. That’s pretty whopping by any standard.

So, what does this all mean? At first glance the market appears to be enormous and the default rate high – surely this can only mean trouble for the financial sector. Recall that the subprime mortgage market was estimated at being about $1.3trn in 2007 and when that blew up it took the financial system down with it. The student loan market, clocking in at around $870m and rising, is certainly somewhere in that ballpark.

Nevertheless the student loans market seems to be slightly different. The subprime market was built on debts that were structured in such a way that they excluded only a so-called ‘black swan’ event – that is, the occurrence of a series of defaults that those constructing the debts deemed basically impossible. What they didn’t factor in, of course, was an asset price bubble in the housing market that, when it inevitably blew up, would raise the default rate significantly almost overnight.

It is not clear that there is such a potential for a black swan event in the student loan market. This market is not in a bubble per se. It is similar to the mortgage market in that it is an enormous amount of long-term debt placed on the backs of people who are going to have a very difficult time paying it off. But it is still not predicated on ever rising asset prices that could collapse at any moment, as the housing market was prior to 2008.

The only massive shock that could bring down this market all at once would be a sharp rise in the unemployment rate among college graduates. That could lead the payments system to break down and might constitute a so-called black swan event. This is unlikely, however, unless there is another massive financial or economic shock. And in such a case, the student loan market might be more of an aftershock than an earthquake. Although in saying that the possibility is not to be sneered at.

More important, perhaps, is the fact that many students in the US are burdening themselves with enormous amounts of debt in an era when opportunities are drying up and the future looks bleak. This seems to be an awful and retrograde economic strategy by the US government. And yet, although the administration recognises the problem, they continue to think that private sector debt is the way to fund the education system. This even though a federally funded education system would be much cheaper given that borrowing by the federal government is far less costly than by a student with an uncertain future.

But it is only the Occupy movement that has even raised these issues and they look likely to penetrate the mainstream in the near future, so concerned are the US about their budget deficit. More likely that the student loan market will continue its expansion and increasing numbers of students will be subject to what can only be described as a sort of debt peonage. Meanwhile the government will attempt to avoid bankruptcies through restructuring arrangement that, while preventing many from going fully underwater, hardly save them from the nasty prospects of persistent partial drowning in what can only be described as the financial equivalent of water-boarding.