By Delusional Economics continues his expose into why economists don’t understand the economy, with a look at Australia’s sectoral balances and our chronic CAD. Cross posted from MacroBusiness. 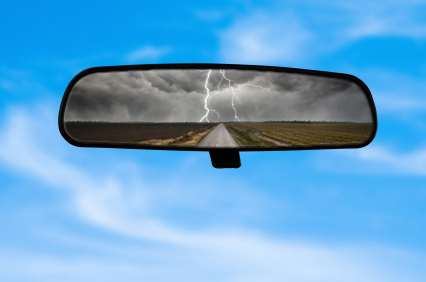 As you may have noticed I’ve taken an eye off Europe for a short while in order to provide some macro analysis on what is happening in the Australian economy. At present there is a growing gap in the economic conversation in Australia between what is actually happening and the rhetoric….

This post is a continuation of my “adult conversations” thread. In case you have come to this post directly I advice you to pop back to the original post  for some frame of reference.

On Friday I discussed the Australian balance of payments in order to explain the economic circumstances the country finds itself in with regards to the external sector. A circumstance very few people in the Australian financial elite appear to even recognise, let alone discuss. However, as you may have noticed, ideas floated on MacroBusiness have a funny way of becoming topical in the mainstream media, so here’s hoping.

Australia’s external sector has been in an ever-growing deficit since 1975. In order to fund this debt with the rest of the world the country continues to sell ever-increasing amount of financial assets. This has led to the situation where the outflows of capital stemming from those financial assets is greater than inflows gained from trade of goods and services, even with the historically high terms of trade stemming from the commodities-led mining boom.

It is no wonder Wikipedia is calling us “secluded”.

As you may have read in my Friday post I tend to analyse the economy via a sectoral view because it lines up with the National Accounts – click here to go to the ABS for an overview. It also provides some fairly good insight into the flows across the sectors, which ultimately means it is easy to predict what the outcome of one sector is going to be if you know what the other two are up to. If you have been following my Europe posts for any length of time you will know that this type of analysis has been fairly successful in predicting the outcomes for the European periphery over the last 2 years.

A very basic, yet often forgotten, rule of economics is someone’s spending is someone else’s income. What the sectoral view of the economy tells us is that:

A fall in spending, meaning a lesser sum of these elements, therefore results in a fall in national income. The sectoral view also tells us that a fall in one sector can be offset by a rise in another, yet it also informs us that the sectors are linked, and therefore changes in one sector have impact the balance of the others.

As we have seen from nations like Greece and Portugal, a country with a long running current account deficit and a private sector with a desire – or no choice to save (austerity) – has significant problems trying to reach a government surplus. Once you understand that the external sector and the private sector are a net drain on national income it isn’t hard to see the problem. Under these circumstances there is simply no room left in the economy for savings in the government sector and attempts to reach government surpluses become counter-productive as this simply accelerates the decline.

If a country’s current account deficit is structural ( I’ll explain this later ) then these efforts are very dangerous because this can easily develop into a damaging feedback loop. The loss of income through the external sector leads to a loss of income in the private sector, this then drives the stronger desire to save, meaning government revenues fall further. This inevitably leads to calls for higher taxes, which once again drain income from the private sector … and around we go. The result of this dynamic is a rise in unemployment, therefore national production and income, meaning once again the government sectors revenue decline while private sector spending and investment fall further.

As you may have noticed I neglected to mention the external sector in that example. When spending in the private sector falls the current account tends to rise towards surplus as imports fall. If structure of the external sector is such that a fall in imports can bring it back to surplus while the private sector and the government are saving at their desired rate then eventually the balances of the sectors will be restored, but at a lower national income and gross domestic product (GDP).

That, however, is a big ask for most economies, especially those that have spent many years structured around expanding debt and internal consumption. As we have seen in Europe the attempt of the government and the private sector to deleverage at the same time in these economies hasn’t tipped the external sector into surplus because the collapse in industrial production hasn’t allowed it ever to get there. In these cases what needs to occur is a write-off of existing debts, or an expansion of debt in an alternative sector in order to restore the balance. As neither of these things has occurred the economies have begun to fail.

This is an example of what I describe as a ‘structural deficit in the current account’. It means that the structure of the nation’s debt with the rest of the world is such that slowing private sector debt doesn’t necessarily equate to a corresponding rise in the current account. What you would hope to see in these economies is an adjustment in the private sector so that they are less reliant on imports while producing more exports. I think you’ll find that this is the basic definition ‘productivity’.

Greater productivity is obviously the desirable goal but isn’t something that is achieved easily and is dependent on a nation’s ability to provide itself inputs to production. In reality productivity gains require investment in both humans and technology, which means spending, something that isn’t happening while both the private and government sectors are attempting to deleverage.

So how does all of this relate to what we are seeing in Australia at present?

Well obviously we aren’t in the same situation of the European periphery because our country is still seen as an attractive investment by the rest of the world. But the current account data certainly puts the mining boom in perspective. It isn’t so much that the country is profiting from the mining boom and the high terms of trade, more that it has enabled us to maintain a growing national income through private sector debt expansion because the rest of the world has been willing to fund it.

One of the big questions you have to ask is whether this is actually a problem. We’ve had a growing external debt for over 3 decades and in that time our national wealth has grown strongly. So why can’t this just go on and on? Well, actually there isn’t any reason why it couldn’t continue for many years yet. But in order for that to occur given the current structure of the economy it will require either the government and/or the private sectors to continue to expand their debt positions. 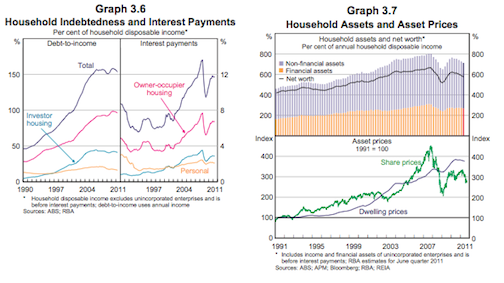 As MacroBusiness has focussed over the last year, the lending statistics appear to show that households have reached their limit in terms of debt to income and businesses reliant on consumption are suffering from the flow-on effects of that behaviour.

Once you realise this you start to understand the confusion in the public arena about what we are witnessing in Mining Boom II. The shock of the GFC changed the spending patterns of the private sector meaning that they desired to save a larger proportion of their incomes. By doing so the rate of credit issuance in the private sector began to decline. Initially this decline was met by additional spending from the government sector via the stimulus programs, which also had some flow-on effects to behaviour in the private sector.

However, as the effects of these stimulus programs has worn off, and the government drives towards a surplus, the downward trend in private sector credit growth has resumed. This dynamic is beginning to show in national income as it appears to be about to roll-over again. 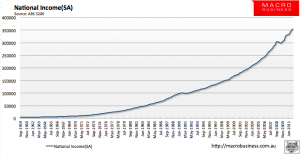 This is why you are now seeing the confusing messages coming from the government over their budget. Their push for surplus is putting downward pressure on national income, while the private sector is attempting to push its balance sheet towards more saving. This is leading to a fall in government income via consumption related taxation, and so, every couple of months Wayne Swan has to re-inform the public that yet another couple of billion has suddenly disappeared from the government coffers. Lately he has been using the excuse that “mining boom II isn’t the rivers of gold of boom I”.

As you may now understand that is nothing like a valid explanation of what is happening in the economy. As I have explained, the facts are:

The overall outcome of these three factors is that the rate of national income growth has slowed, as has GDP growth. If these factors remain in play then eventually the economy will begin to shrink, even as terms of trade remain high. As you can see, however, these factors have intertwined outcomes, which means that simple one-sided adjustments to reverse the economy’s decline may not have the expected results.