This clip from TV Asahi is a lucid explanation of the biggest ongoing news story in the world today: The catastrophic consequences if an earthquake strikes the Fukushima Dai-Ichi No. 4 power plant before its spent fuel rods are moved to safe storage place, a process that will not even begin until December 2013, and could take years. It aired March 8, 2012 on “Morning Bird,” a mainstream Japanese news and information TV program.

I made a transcript from the video subtitles (created by tokyobrowntabby), since this interview received no (zero, zip, zilch, nada) coverage in our famously free press, and I’d also like people to be able to quote from it, and search engines to find it. If you just read the transcript, and play the whole video through, at least play the presenters’ reaction shot at [5:04 – 5:07]; “the end” is impactful. The reporter is Mr. Toru TAMAKAWA. The expert is Dr. Hiroaki KOIDE, Research Associate at the Research Reactor Institute of Kyoto University. I’ve marked material from other presenters PRESENTER.

TAMAKAWA [0:00] You may think it’s “already one year [since the accident] but it’s actually “still only one year.” [0:05] True cause of the Fukushima Daiichi accident still hasn’t been identified. [0:10] Results from the investigation by Nuclear Accident Independent Investigation Commission (NAIIC) designated by Japan’s Diet have not been published yet. [0:18] Still, they are talking about resuming the operation of nuclear plants. [0:21] I wonder what lessons they have learned from the Fukushima accident. [0:26] I want to ask you if TEPCO’s Fukushima Daichii is safe now. [0:35] They talk as if the accident was over. Is it really over? Please look at this.

KOIDE [1:45] As you see, there’s the pool, here and many spent fuel rods are in the bottom of the pool. [1:54] If a large aftershock strikes and the wall here collapses, the water in the pool will leak out and the spent fuel will not be cooled any more. [2:07] Then they will start to melt, probably completely. [2:15] And a huge amount of radiation contained in the spent fuel will be released outside, with no walls to contain it.

KOIDE [2:37] Well, if you hoist them up in the air, huge amount of radiation will come out from the spent fuel [2:45] and people nearby will have no choice but to die from it.

TAMAKAWA [2:53] Spent fuel rods are in the pool but it doesn’t mean they’re “spent.” [2:58] They still produce heat and still have radioactivity that would kill peple nearby if exposed in the air. [3:05] They are safe now simply because they are in the water and the water blocks the radiation. [3:10] As the video shows, I asked him “Why can’t we simply transfer them to another pool?” Now, let’s look at how the transfer is normally done. [3:20] As shown here, nuclear fuel rods are initially in the reactor. When they are spent, they are transferred to the spent fuel pool here.[3:28] What they do first is lower this giant container into the water. [3:34] Then the fuel rods are transferred into this container in the water. All of them. [3:42] Then they close the lid with water inside, and hoist the container outside. [3:48] But now, because of the earthquake, the crane to hoist them is not working any more. [3:53] Then, how are they going to transfer the fuel rods?

KOIDE [3:58] You see, there’s a giant crane above the operation floor. TAMAKAWA: Yes.

KOIDE [4:02] This crane is for hoisting the giant container up and down. [4:09] But since this reactor building itself was blown off by the explosion, they can’t even use this crane. [4:16] There are many things they have to do. [4:18] First, remove the debris and other things that have fallen into the fuel pool. [4:25] Next, they have to set up a crane at the site to lower the giant container into the water. [4:35] A giant crane to operate from outside. They have to make preparations for this operation. [4:41] Lower the container down into the water, put the fuel rods which are probably damaged to some degree, into the container [4:48] and hoist it up to move outside. All this could take years.

TAMAKAWA [4:57] What if a destructive earthquake strikes during those years?

TAMAKAWA [5:14] TEPCO knows this is the most pressing issue. Yesterday, as if to make it in time for our program, TEPCO announced the latest schedule. [5:22] It says they start retreiving the fuel rods of Unit 4 in January next year at the earliest. [5:27] So if a large earthquake should strike from now until that January… [5:35] No, it doesn’t have to be that large. Unit 4 has been shaken many times already.

PRESENTER [5:39] If the pool got cracks after another earthquake and the water starts to leak out, Dr. Koide says that will be the end.

TAMAKAWA [5:49] The end for a wide area including Tokyo.

PRESENTER [5:54] Oh my, and they are talking about resuming nuclear power plant operation.

TAMAKAWA [5:55] I think resuming the operation is out of the question at least until the results from the investigation by NAIIC come out [but see below]. [6:00] The same goes for the new nuclear regulatory agency. The nature of the agency should reflect their results [but see below].

TAMAKAWA [6:26] But there are many people including Mr. Kono of LDP [opposition] who think that’s not the way it should be.

TAMAKAWA: No, they aren’t. [6:36] There are people who think the same even in DJP [ruling party]. But here are also many people who want to resume the operation.

PRESENTER [6:42] They talk about resuming the operation after gaining understanding from local communities. [6:45] But for this issue, I think the whole country of Japan, or the whole area including the neighboring countries, is a “local community” that would be affected. [6:51] We should keep in mind that it’s not only the sites of the plants that should be considered as “local communities.”

PRESENTER [6:57] We should recognize the accident is far from over and the crisis is still ongoing.

TAMAKAWA [7:06] Yes. And excuse me, I have a correction to make. [7:13] Retrieving the fuel rods is planned to start not from January, but from… when? December next year? (Yes.)

TAMAKAWA [7:14] December next year? No kidding!

PRESENTER [7:21] The members of the Diet who want to resume, I want them to resign.

PRESENTER [7:25] We need to reconsider this issue.

PRESENTER [7:28] I want to know the exact names of the members of the Diet who want to resume, and ask them for their opinions.

TAMAKAWA [7:34] I hope this issue will be discussed further at the Diet.

Since March 8, when the show aired:

1. I find the contrast between the trappings of a morning talk show — the flowers, the stuffed animals — and the subject matter almost unbearably poignant. I assume our government has plans to accept refugees in case of disaster. Not.

3. The following moral claim sounds very familiar to me:

[6:42] They talk about resuming the operation after gaining understanding from local communities. [6:45] But for this issue, I think the whole country of Japan, or the whole area including the neighboring countries, is a “local community” that would be affected. [6:51] We should keep in mind that it’s not only the sites of the plants that should be considered as “local communities.”

This is exactly the moral claim made in landfill and mining fights up here in the great state of Maine. (In legal terms, we call it “standing.”) It’s also the same claim made in fights against mountaintop removal, fracking, and Obama’s Keystone XL project. And oddly, or not, this argument gets at little credence from Japan’s elite as it does from our own. “Who then is my neighbor?” (Luke 10:29).

4. Look! Over there! Hillary Rosen! 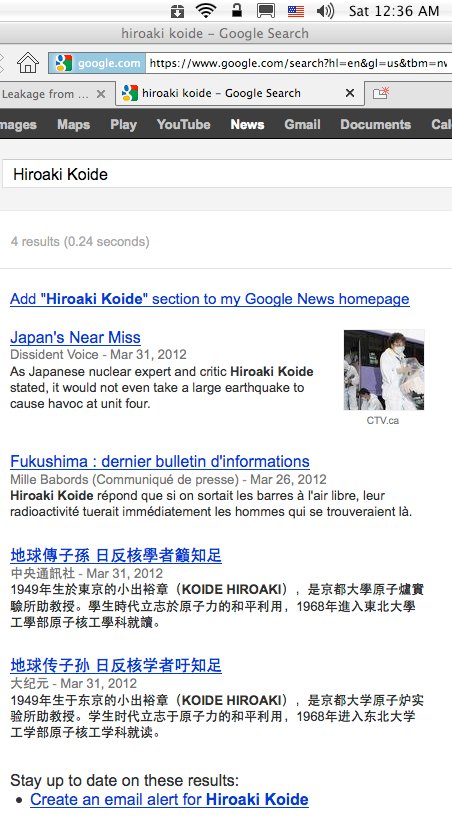 Again, this isn’t fringe; this interview appeared on a major, “mainstream” Japanese television network, TV Asahi. The censorship in this country is positively Goebbelsian in its pervasiveness and power, isn’t it?