The US Has Made No Progress on College Graduation Rates in 30 Years (Chart) Truthout. I’m not sure this is all that meaningful. The caliber of what constitutes “tertiary education” varies a lot (but the flip side is that a fair bit of what is college education in the US is accomplished in secondary schools in other countries). The bigger problem is that US educational levels (literacy, numeracy) are falling, and the US is alone in that among advanced economies.

How to Start Your Own Power Company, Stop Coal and Nukes, and Transform Your City Alternet (hat tip reader May S)

5 Big Media Stereotypes About the South (And the Real Story Behind Them) Alternet. I can’t speak for the rest of the South, but as far as Alabama is concerned, she is just wrong on 2 and 4, and the use of “stupid” in 3 is disingenuous. Educational standards suck in Alabama, period.

Number of the Week: How Long Before Job Seekers Give Up? WSJ Real Time Economics

Tamara Mellon puts the boot in to buyouts Financial Times. Her comments are devastating, not that that should be any surprise.

An angry priest scatters the money lenders The Age. Notice an anti-bank story is picked up in Oz, not here.

Antidote du jour. This is Brighty the guard donkey (but Scott thinks the lambs in the accompanying photos would make for a nice Easter meal): 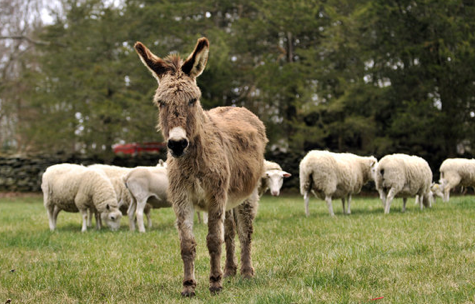